Officials want to clear a mile-long homeless camp on a Sonoma County bike trail. Some don't want to go 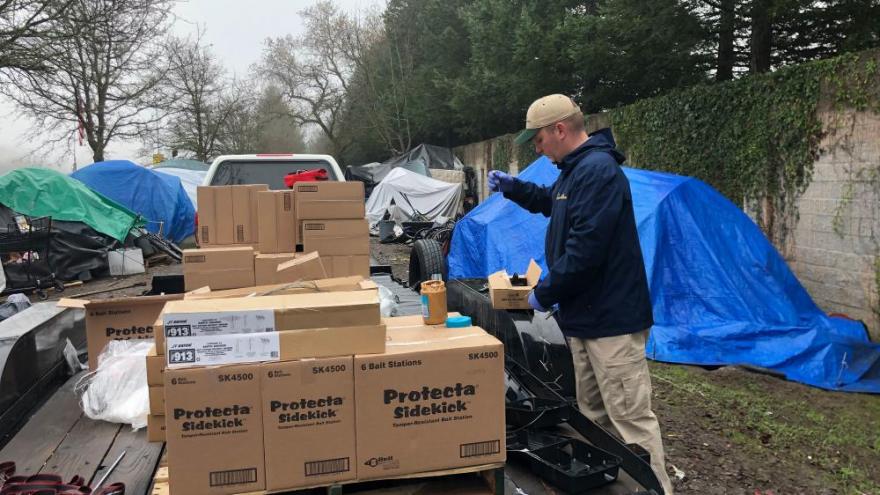 A pest control technician bates a trap with peanut butter.

(CNN) -- The globs of peanut butter were evenly applied. But this was no sandwich.

Pest control workers were using the spread as bait as they installed rat traps -- 340 of them -- throughout the mile-long homeless encampment after infrared video from a sheriff's helicopter revealed a major rodent infestation.

"I think it's sad and overwhelming," said pest control technician Matt Dougherty of the conditions for more than 200 homeless residents. "We're here just to make it better for them."

The rat problem could hardly have been a surprise. Trash and human waste had been piling up for months along the Joe Rodota Trail, nestled behind neighborhoods in the heart of Northern California wine country.

A popular biking spot, the trail is now the site of the largest homeless encampment in Sonoma County history. It's also a textbook outcome of the 16% surge last year in homelessness in California -- largely fueled by skyrocketing housing costs -- and the myriad problems that go along with it.

"It's an occupation. It's taken over our neighborhood," Stuart Kiehl, who has lived in Santa Rosa for 20 years, said of the trail encampment. "It means lower property values. There are people that are 40 feet away who have townhouses. Who would want to buy their house?"

Facing those fears, along with public health and safety concerns, local officials have taken steps to clear the encampment by January 31. But a pair of federal court rulings requires them first to offer everyone who lives there a spot in a shelter. And so far, there are not enough.

Meantime, some of the encampment's residents simply don't want to go, in part because along with community antagonism has come compassion and a steady stream of drop-offs, including clothes and food.

"I love it. I put myself here," a 40-year-old known as Bicycle Dave said of his seven-month stay along the trail. "I don't live out here; I thrive out here. I have everything I need."

Filling the shortage of shelter beds

Santa Rosa has been in emergency-response mode since 2017, when a deadly wildfire tore through, obliterating thousands of homes and leaving behind heaps of ash and twisted metal.

Since then, the homeless encampment has grown gradually into the city's next major challenge.

"I absolutely acknowledge the tremendous anger and frustration in the community and in the neighborhood, and it's warranted," said County Supervisor Lynda Hopkins, whose district includes the trail. She's become the target of a recall effort over it by a few irate constituents.

Aiming to comply with the court mandates -- including one specific to Santa Rosa -- Hopkins and her colleagues last month approved an $11.6 million package to help alleviate the shortage of shelter beds and temporary housing. It's a small sum compared with the $1.4 billion that California Gov. Gavin Newsom, a Democrat, recently proposed to try to stem the homelessness crisis statewide.

A portion of the Santa Rosa money will go to set up the county's first official encampment for a few dozen homeless people. Supervisors' goal is to have enough sanctioned shelter space and other alternatives available so they can close the trail camp by month's end. It's still not clear whether they'll meet the self-imposed deadline.

"We're legally mandated to provide alternatives to every single resident along the trail before we move forward with clearing the encampment," Hopkins said. "We really need to get an encampment opened in a place that is actually appropriate for it."

County officials also have installed portable toilets along the trail. But the encampment still is rife with open drug use, violence and crime, local officials said. Drug needles recently littered the path amid the piles of trash and junk.

"Yes, there are thieves and there are addicts," said Scott Wagner, a homeless advocate with the nonprofit Sonoma Applied Village Services, which has been working to make the encampment more sanitary. "But there are also people struggling that just lost their job. You have to take each case individually."

"Girl stuff, come check it out. Perfume!" she announced. "I'm not going to go hungry here because people bring things."

Edwards, who said she worked as a nurse's aide in her home state of Nebraska, followed a boyfriend to California, she said. A bad breakup left her homeless.

"I hate to think that I will die out here and didn't make anything of myself," she said.

But like a lot of people on the trail, Edwards seemed to have no plan or path, indicative of broader challenges associated with the homeless crisis.

"I definitely do it as self-medication, so I can just get through things," she said. "It's just the crutch I use 'cause it's not easy out here."