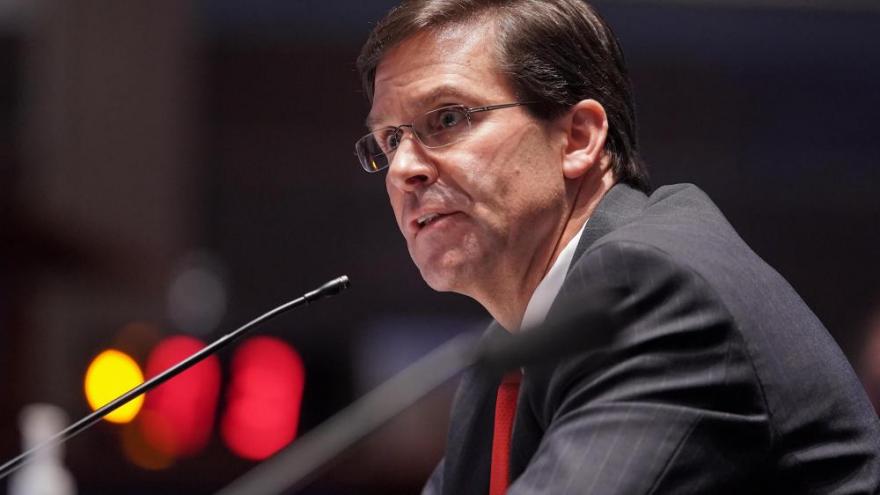 Defense Secretary Mark Esper is attempting to fashion a graceful exit from office if President Donald Trump decides to fire him regardless of the result of the presidential election, according to several defense sources, including one senior defense official.

(CNN) -- Defense Secretary Mark Esper is attempting to fashion a graceful exit from office if President Donald Trump decides to fire him regardless of the result of the presidential election, according to several defense sources, including one senior defense official.

Several defense officials confirm Esper has long had a resignation letter prepared and that once the election is decided the President may turn his attention to Esper's fate, meaning he could be gone within days.

One of the officials emphasized the letter has not been updated since Tuesday's election.

The officials say Esper's plans are no secret within the Pentagon and that he would like to stay in the job as long as he can, but his relationship with Trump has deteriorated to the point that he is aware that might not be possible.

Esper is acutely aware that the President could fire him by tweet at any time, even if Trump's Democratic opponent, Joe Biden, wins the election, officials familiar with his thinking say.

NBC was first to report that Esper has drafted a resignation letter.

Chief Pentagon spokesperson Jonathan Hoffman tweeted Wednesday that "Secretary of Defense Esper has no plans to resign, nor has he been asked to submit a letter of resignation."

"He continues to serve the nation as the Secretary of Defense at the pleasure of the President and is working on the irreversible implementation of the National Defense Strategy," Hoffman added.

Senior officials often have resignation letters prepared to give the President who appointed them the option to replace them if they are reelected.

Several officials say that behind the scenes at the Pentagon some very preliminary administrative steps to prepare for a departure and transition are underway -- a reflection of the widespread assessment that Trump has been tiring of his latest secretary of defense, who he has derisively called "Yesper."

If Esper leaves the job and Trump chooses not to install an interim replacement, Deputy Defense Secretary David Norquist would serve in the role in an acting capacity until a replacement is named by whoever wins the election.

Officials say Esper wants to avoid becoming the latest in a long line of top administration officials to be shown the door after breaking with Trump privately or publicly, many of whom were ousted by the President via a tweet or other public humiliation.

Esper has been on shaky ground for months

CNN has previously reported that Esper has been on shaky ground with the White House for months, a rift that deepened after the defense secretary said in June that he did not support using active-duty troops to quell the large-scale protests across the United States triggered by the death of George Floyd at the hands of police. Esper also said military forces should be used in a law enforcement role only as a last resort.

His remarks from the Pentagon briefing room were seen by many as an effort to distance himself from Trump's threats to deploy the military to enforce order on American city streets.

That news briefing by Esper went over poorly at the White House, multiple people familiar with the matter said, but a senior Republican source told CNN that tension between Trump and Esper predated the split over using the military.

White House sentiment about Esper had been gradually souring since the summer, with both Trump and national security adviser Robert O'Brien viewing Esper as not entirely committed to the President's vision for the military, according to multiple administration officials.

For months, Trump and O'Brien have been losing faith in Esper's ability to lead the military and have been frustrated by his tendency to avoid offering a full-throated defense of the President or his policies, the administration officials said.

One administration source told CNN that Trump has had no respect for Esper, leaving the defense secretary with little influence and little choice but to take his lead from Secretary of State Mike Pompeo.

Trump went as far as to mock his defense chief's derisive nickname of "Yesper" during a news conference in August, a nickname bestowed upon him by defense officials who believed he did not go far enough in standing up to the President's more controversial decisions.

Asked if he had considered firing Esper, Trump responded: "I consider firing everybody. At some point, that's what happens."

Trump has privately expressed frustrations with Esper for months. The President vented about him at length during a trip to Camp David earlier this year, according to multiple sources.

Esper has appeared eager to keep as low a profile as possible, taking very few questions from the press in recent months and conducting official visits abroad.

Trump lambasted the leadership of the Pentagon in September, accusing the military's leadership of seeking to fight wars in order to boost the profits of defense contractors.

The President's accusations drew the ire of Esper, who called White House chief of staff Mark Meadows to complain, according to defense officials. Meadows soon afterward appeared on television and attempted to walk back Trump's comments, saying his broadside against the Pentagon's leaders had not been directed at anyone in particular.

One of Esper's most fraught challenges was the direct result of disagreement with the White House: the President's refusal to accept the Pentagon's willingness to rename military bases that honor Confederate generals.