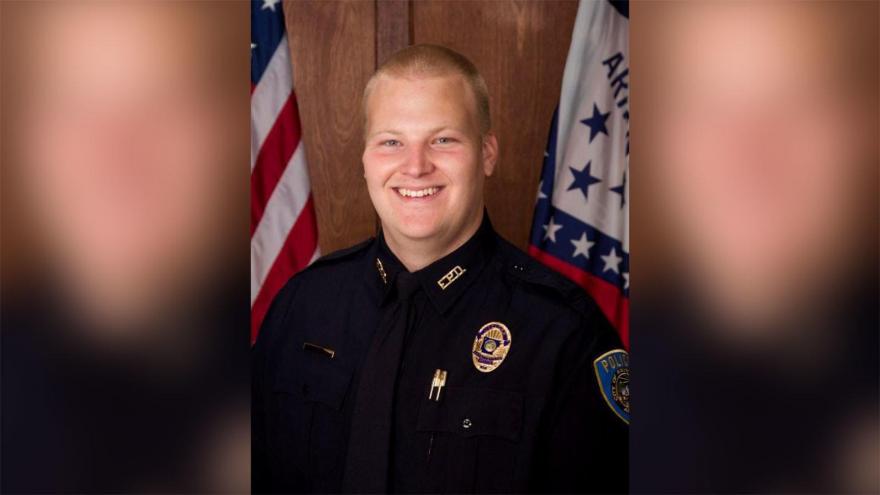 Officer Stephen Carr, 27, of Fayetteville, was sitting in his patrol vehicle behind the Police Department on the night of December 7 when an armed man approached and opened fire, police said last week. The suspect, later identified as London T. Phillips, 35, was killed in a confrontation with police. Officers fired on Phillips after a confrontation, shooting him. The news release continues that after the suspect was down responding officers found police officer Stephen Carr shot in his patrol vehicle. EMS was called but both Officer Carr and the suspect died at the scene. Evidence shows Officer Carr was ambushed and executed in his vehicle according to the news release. No motive has been given for Officer Carrís killing. The news releases concludes with a remembrance of Officer Carr saying, ìHe served our community with dedication and professionalism for the past 2 Ω years, he is a HERO. We would like to thank our community for their outpouring of support, along with our local, state, and federal law enforcement partners for their quick response and assistance. Our thoughts and prayers are with Officer Carrís family during this tragic time.î

(CNN) -- Authorities have released surveillance footage showing what police called the ambush and execution of an Arkansas police officer.

Stephen Carr, 27, of Fayetteville, was sitting in his patrol vehicle behind the police department on the night of December 7 when an armed man approached and opened fire, police said last week. The suspect, later identified as London T. Phillips, 35, was killed in a confrontation with police.

"We have hesitated to release the attached video of what transpired that night due to the heinous and shocking nature of this crime," the Washington County Sheriff's Office said in a statement. "But in an effort to keep the public informed of exactly what happened that night, we are releasing video of the incident along with the results of the Arkansas State Medical Examiner's preliminary findings."

The preliminary results of Carr's autopsy found he was shot in the head 10 times, the sheriff's office said.

The first shows Phillips walking down the sidewalk in front of City Hall immediately prior to the shooting, the sheriff's office said. He's wearing a black baseball cap, black jacket and jeans.

When he reappears, Phillips is seen repeatedly firing at the patrol vehicle as he walks away.

Seconds later, a responding officer opens the door of the building and Phillips runs away. The officer shoots at the suspect, who's seen from another angle, running around into an alleyway, the sheriff's office said.

The last video shows the officers, who are identified only by their last names, searching for Phillips in the alleyway before confronting him, the sheriff's office said.

So far, the investigation shows Phillips used a 9mm semi-automatic handgun that he legally purchased in 2017, the sheriff's office said.

Phillips had two boxes of ammunition with him: a full box with 50 rounds and another box partially filled with 32. He fired 16 in all, the sheriff's office said, and he'd reloaded his gun with another magazine containing 17 rounds.

"Searches of the assailant's social media accounts indicate he was interested in anti-law enforcement groups," the sheriff's office said.

The police officers involved in the shooting have been placed on administrative leave pending the outcome of the investigation, the Fayetteville Police Department said last week. The investigation is ongoing.