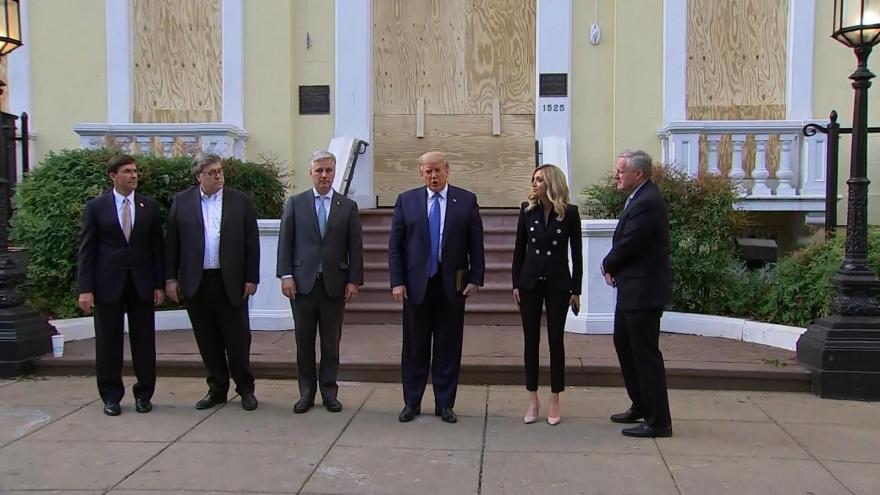 A former top policy official at the Pentagon, James Miller, resigned from his role on the Defense Advisory Board due to what he said was Secretary of Defense Mark Esper's visible support for law enforcement officers' clearing of protesters from Lafayette Square on Monday.

(CNN) -- A former top policy official at the Pentagon, James Miller, resigned from his role on the Defense Advisory Board due to what he said was Secretary of Defense Mark Esper's visible support for law enforcement officers' clearing of protesters from Lafayette Square on Monday.

Miller called what he saw as Esper's support for suppressing the protest a violation of Esper's oath of office. Miller served as the Pentagon's undersecretary of defense for policy during the Obama administration.

"When I joined the Board in early 2014, after leaving government service as Under Secretary of Defense for Policy, I again swore an oath of office, one familiar to you, that includes the commitment to 'support and defend the Constitution of the United States . . . and to bear true faith and allegiance to the same,' " Miller wrote in a resignation letter addressed to Esper, which was published Tuesday in The Washington Post.

"You may not have been able to stop President Trump from directing this appalling use of force, but you could have chosen to oppose it. Instead, you visibly supported it," Miller added.

Pentagon spokesperson Lt. Col. Robert Carver confirmed to CNN that Miller had resigned but declined to comment on the content of the resignation letter.

On Monday, roughly a half hour before a curfew went into effect for Washington, following a weekend of unrest over the death of George Floyd, law enforcement began pushing back the crowd of peaceful protesters gathered outside the White House with tear gas, flash grenades and rubber bullets.

After they were cleared, President Donald Trump and an entourage of administration officials and security personnel walked to nearby St. John's Episcopal Church, a historic house of worship, where the President posed for photos, some of which included Esper and several other top officials. The exterior of the church had been defaced during protests outside the White House on Sunday and there had been a small fire in the parish house basement, but church leaders said in a statement that the structure was largely "untouched."

Esper told NBC on Tuesday that he thought the trip out of the White House was "to see some damage and to talk to the troops."

"I didn't know where I was going," Esper told the network. "I wanted to see how much damage actually happened."

The secretary also addressed the widespread protests in an internal department-wide memo on Tuesday, saying, "I, like you, am steadfast in my belief that Americans who are frustrated, angry, and seeking to be heard must be ensured that opportunity."

Protesters who have taken to the streets in recent days to draw attention to Floyd's case and police violence across America say they want to see charges for all four police officers involved in his death. So far, officials have only charged the officer who was seen in a video with his knee on Floyd's neck with third-degree murder and manslaughter -- charges the protesters believe aren't harsh enough.

The Defense Advisory Board, which was established in the 1950s during the height of the Cold War, comprises nearly 50 retired senior military, government, and industry leaders, and has advised the Pentagon on issues such as acquisition, cyber and communication technology, and weapons of mass destruction.