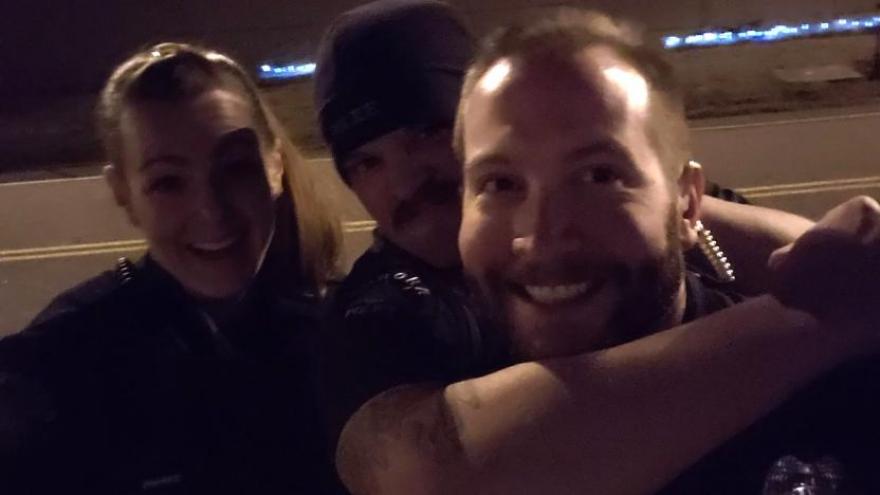 One of the photographs of three police officers near the Elijah McClain memorial site in Aurora, Colorado.

(CNN) -- Protesters returned to the streets of Aurora, Colorado, on Friday after the city's police chief fired two officers involved in taking selfie photographs at the memorial site for Elijah McClain and an officer who failed to alert supervisors about the photos.

Thousands of protesters wearing masks because of the coronavirus pandemic marched to a police precinct in Aurora, chanting, "Say his name, Elijah McClain," and "Brick by brick, wall by wall, this racist system has to go."

As police in riot gear came into view, they started chanting, "Why are you in riot gear, I don't see no riot here." One of the protesters announced they will not be storming the precinct, but plan to stay around the building.

The photos were taken on October 20, 2019, at the site of the August 24, 2019, incident involving McClain, who later died after struggling with officers. Marrero, Dittrich and Jones are in the photograph, which was taken while the three were on duty and had just completed a call, according to the department's investigation.

Rosenblatt was sent the photo in a text but failed to notify a supervisor, Wilson said in a news conference. According to Wilson, when Rosenblatt received the photo, he replied, "ha ha."

"To even think about doing such a thing is beyond, it's beyond comprehension. It is reprehensible," Wilson said. "It shows a lack of morals, values, and integrity, and a judgment that I can no longer trust to allow them to wear this badge."

Wilson said one of the photos show the officers smiling while reenacting the way Elijah McClain was held by the police officers in a chokehold last year. She called it "a crime against humanity and decency."

Wilson says she was made aware of the photographs last week after an uninvolved officer saw the photo and reported it to a sergeant, who immediately notified her.

The union for the police officers, the Aurora Police Association, said the investigation into the photos was done in "an unprecedented fashion."

"This internal investigation was conducted in an unprecedented fashion. All of the officers involved were ordered to give interview on very short notice, without proper preparation, outside of their normal work hours, had their phones confiscated and downloaded," the association said in a statement.

The statement criticized Wilson and said the probe violated the officer's right to due process. "This investigation is a rush to judgment," according to the statement.

In their interviews with internal affairs investigators, the officers said the photos were an attempt to cheer up another officer who was involved in the incident with McClain.

"Myself and two other officers were in the area on a call and observed the memorial and took a photograph in front of it for the sole purpose to try to cheer up one of the members that was involved in the initial Elijah McClain incident," said Jones in his interview with internal affairs investigators.

Dittrich also told investigators that the photo was an attempt to cheer up the other officer and that it was his idea to have Jones put his arm around his neck. It was not his intent to make fun of McClain's death, he said.

"I realized afterwards that this was in incredibly, to say it was incredibly poor taste is an understatement," he said.

Marrero told investigators that it was an attempt to cheer up another officer, but it was not appreciated by the officer.

"I might have suggested it, I didn't think of it as a big thing because I didn't mean any ill intent by it, so I was like let's just send him a 'Hey, we're thinking of you' kind of thing," she said.

Rosenblatt said his response to the text was meant to try to close the discussion.

"People that know me know that I have a nervous laugh and I wanted to give something short and concise and not engage in any way and just let them know and kind of be done with it," Rosenblatt told investigators when asked what that reply meant to him.

"The officers' actions in these photos are appalling and inexcusable and will not be tolerated by the Interim chief or me. I agree with Interim Chief Wilson's decisions," he said in a statement posted to Twitter.

Wilson says she understands the devastating impact this incident has had on the relationship between the community and the police department. She believes that transparency is paramount in beginning to rebuild that relationship.

"It's a privilege to wear this badge, and it's not a right," Wilson said.

McClain's family expressed their shock after seeing the photographs of the former officers at McClain's memorial site.

"This is a department with police who tackled an innocent young Black man, inflicted fifteen minutes of multiple kinds of excessive force, including two carotid chokeholds, who stood over him joking, 'Don't get that on me' while he was vomiting from the pain, and threatened to sic a dog on him because he wasn't lying still enough while dying," they said in a statement.

The attorney representing McClain's family, Mari Newman said in a news conference on Friday that the family is going to have to file a civil rights lawsuit.

"Now my expectation is we're going to have to go ahead and file that civil rights lawsuit because I am told that although there are all kinds of independent investigation going on, I've been around too long to trust our government to protect us," Newman said.

McClain, a 23-year-old Black man, was stopped by three White officers last August as he walked home from a nearby convenience store. A 911 caller had described a "suspicious person," according to a police overview of the incident.

After McClain resisted officer contact, a struggle ensued and an officer placed McClain in a carotid hold -- or chokehold -- and he briefly lost consciousness, according to an overview of the incident police provided.

McClain began struggling again once he was released from the hold, the report said. When paramedics arrived, they administered the drug ketamine to sedate McClain, the report said. McClain suffered a heart attack while in the ambulance and was declared brain dead three days later, the district attorney said in a letter.

His death is one of several that has attracted renewed attention following the deaths of other Black people at the hands of police, like George Floyd in Minneapolis, Breonna Taylor in Louisville, Kentucky, and Rayshard Brooks in Atlanta.