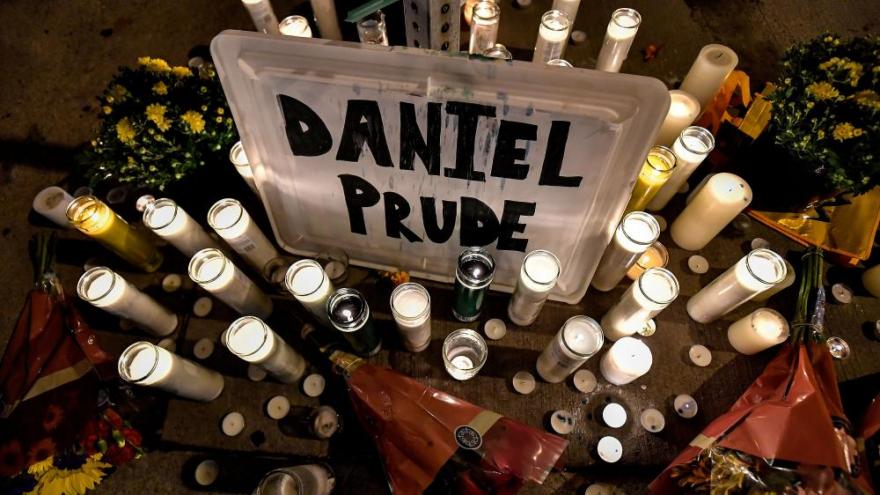 The family of Daniel Prude in Rochester, New York, are calling for the firing and arrest of all of the police officers involved in his death, in which they say a bag was placed over his head.

(CNN) -- Seven police officers in Rochester, New York, involved in the March arrest of a Black man who was pinned to the ground and later died have been suspended, the city's mayor announced.

"Mr. (Daniel) Prude lost his life in our city. He lost his life because of the actions of our police officers," Rochester Mayor Lovely Warren said Thursday in a news conference.

The suspensions come a day after attorneys for Prude's family released police bodycam video that shows officers covering the man's head with a "spit sock" and holding him on the ground in a prone position before he stopped breathing.

Warren said some of the officers who were suspended appear on the body camera footage and others "had a duty to stop what was happening." They are being suspended with pay "against the advice of council," she said.

CNN has reached out to the Rochester Police Locust Club, the union representing the city officers, for comment about the suspensions.

The mayor told reporters on Thursday that she had been misled by the city's police chief, who she said led her to believe the man died in police custody of an overdose. She saw the body camera footage for the first time nearly a month ago, Warren said.

Prude was failed by many officials before and during the March 23 incident, the mayor said. He would have been treated different if he was White, she said.

"Institutional structural racism led to Daniel Prude's death. I won't deny it. I stand before it and I call for justice upon it," Warren said.

Prude's daughter, Tashyra Prude, is calling for the officers' firing and wants them to be prosecuted over her father's death.

"They should be arrested and tried as the killers that they are," Tashyra Prude told CNN's Erica Hill on Thursday.

'How many more brothers got to die?,' brother says

Prude, 41, was having a mental health episode on March 23 when his brother Joe called the Rochester Police Department for help, the family said at a press conference Wednesday.

The video provided by attorneys shows officers handcuff Prude, who was naked, in the middle of a snowy wet street, and place a covering over his head.

Several minutes later, EMTs arrive and begin to perform chest compressions, the video shows. He is then placed on a gurney and into an ambulance.

When Prude arrived at the hospital, he was brain dead, his brother said. He died a week later.

His death was ruled a homicide by the Monroe County Medical examiner, according to a copy of the autopsy report obtained by lawyers for his family. The report cites complications of asphyxia in the setting of physical restraint as a finding. The report also cites excited delirium and acute PCP intoxication as causes of death.

The officers involved were not initially suspended and did not receive any disciplinary action. The union representing Rochester police officers had said in a statement to CNN that they have "concerns" about the incident and are working to gather more information.

Speaking at a press conference Wednesday, Joe Prude said police had killed a defenseless Black man and called his brother's death "cold-blooded murder." Elliot Shields, one of the Prude family lawyers, said attorneys are in the preliminary stages of filing a wrongful death suit.

Family members connected his March death -- two months before George Floyd's death in similar circumstances -- to the movement pushing back against police violence toward Black people.

"How many more brothers got to die for society to understand that this needs to stop," Joe Prude said. "And I can't even share with y'all the pain that I'm feeling, and my family is going through as well."

His death also raises questions about how police respond to someone in the midst of a mental health crisis. Police are often the first to respond to reports of a person acting erratically, and they occasionally use police tactics or force in their response. The Washington Post's database of police shootings since 2015, for example, indicates that about 22% of those shot and killed by police reported signs of mental illness.

After the family's press conference, protesters gathered outside the Public Safety Building in downtown Rochester, according to CNN affiliate WHAM.

Organizers from the group Free the People Roc, a Black Lives Matter group, named three officers they say were involved in the incident. CNN is working to confirm their identities and is not naming them at this time.

Family members are calling for the officers to be fired and arrested.

The incident began after Joe Prude and several other people called police. Joe Prude told police that his brother had made suicidal threats earlier in the day and had been taken into custody on a Mental Health Arrest, or MHA.

Additionally, a witness took a Facebook Live video showing Prude undressing and defecating in the street. And a tow truck driver called police to report a naked, bloodied man trying to open a locked car door, the documents provided to CNN say.

The video begins at 3:16 a.m. with Prude naked on a wet street as a light snow falls.

An officer exits his patrol car, approaches Prude while asking him six times to get on the ground as the officer points a Taser at him. Prude complies and is asked to put his hands behind his back, which he quickly does. The officer then cuffs him as Prude says "yes, sir" several times.

Several other officers arrive on scene and one appears to identify Prude by name.

While handcuffed, Prude repeats the phrase "in Jesus Christ I pray, amen." He also makes various remarks about getting his money to take a plane, and he asks for the officers' guns and that they stay away from him. He yells that he has coronavirus and spits in their direction.

Three minutes after the incident begins, one officer puts a spit sock -- which is designed to keep a person from spitting or biting -- over Prude's head.

Prude appears to try to stand at approximately 3:20 a.m., and three officers move in to restrain him and hold him to the ground. Police say Prude is spitting and appears to have vomited. Three minutes and 10 seconds after the restraint, an officer says "he started throwing up, now it looks like he doesn't even have chest compressions."

They call in the EMT to help who instructs an officer to roll Prude over and perform chest compressions, which they do.

Prude appears non-responsive and is loaded into an ambulance at 3:27 a.m., 11 minutes after the first officer arrived on scene.

Police investigators who reviewed the footage and interviews with officers and paramedics cleared the officers of wrongdoing, according to internal documents provided by Prude's family attorneys.

"Based upon the investigation, the officers' actions and conduct displayed when dealing with Prude appear to be appropriate and consistent with their training," an internal police report said.

"The Prude family and the greater Rochester community deserve answers, and we will continue to work around the clock to provide them," James said in a statement.

New York Governor Andrew Cuomo described the video of Daniel Prude "deeply disturbing" Thursday and called for the "case to be concluded as expeditiously as possible."