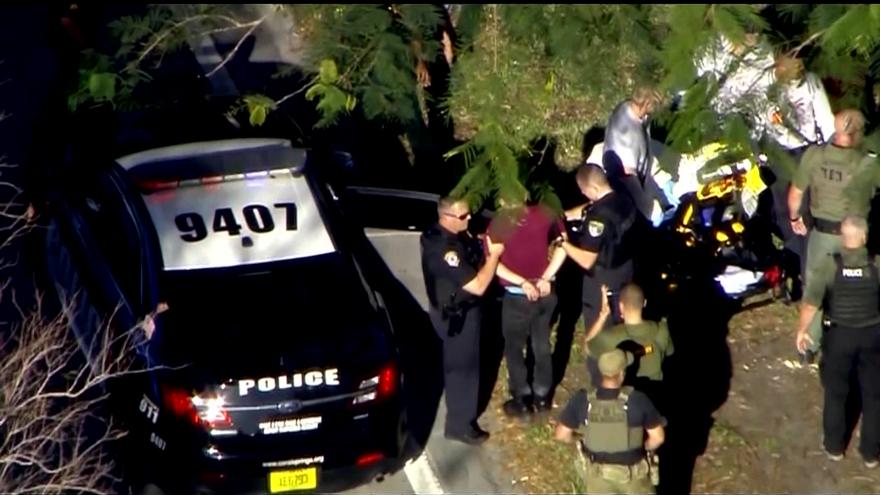 PARKLAND, Fla. (AP) — The Latest on the aftermath of the mass shooting at a high school in Parkland, Florida (all times local):

A board of county commissioners is honoring the Florida police officer credited with taking a suspected school shooter into custody about an hour after 17 people were gunned down at a nearby high school.

Leonard and police Chief Albert "Butch" Arenal received the honor during a commission meeting. Leonard told commissioners it wasn't about him. "It's about my brothers and sisters in law enforcement, fire rescue, first responders. We all had a role that day."

He told news outlets he spotted 19-year-old Nikolas Cruz walking in a neighborhood some 2 miles from the school. He recognized the suspect from police radio traffic and said Cruz offered no resistance when stopped.

The Senate Judiciary A Committee on Tuesday amended House Bill 1083 , allowing public and private school administrators to establish school safety programs that would allow teachers to carry guns. School employees would have to receive 12 hours of training every two years from the Mississippi Department of Public Safety.

Senate Judiciary A Committee Chairman Briggs Hopson, a Vicksburg Republican, says the bill responds to recent school shootings, including in Parkland, Florida, where 17 people were killed at a high school. President Donald Trump and the National Rifle Association support such measures.

Florida House Republicans are rejecting Democratic-filed amendments to a school safety bill that would ban assault weapons, strip language that would allow some teachers to carry guns in schools and require a mental health examination before someone could purchase a gun.

The House appropriations committee was considering a bill Tuesday that would raise the minimum age to buy rifles from 18 to 21 and creates a three-day waiting period for all gun purchases. The bill would also create a program that allows teachers who receive law enforcement training and are deputized by the local sheriff's office to carry concealed weapons in the classroom if also approved by the school district.

Unlike Monday, when hundreds of sometimes rowdy protesters jammed a Senate meeting to consider a similar bill, Tuesday's proceedings were more orderly. But still, several speakers spoke in favor of the assault weapons ban.

The amendment to ban assault weapons was rejected on an 18-11 vote.

The Senate Appropriations Committee is scheduled to take up a similar bill later Tuesday.

A 13-year-old Florida boy is accused of threatening to bring his gun to school and shoot everyone at his middle school.

Volusia County Sheriff's spokesman Andrew Gant tells news outlets the Galaxy Middle School student was angry at his teacher when he made the threat Monday.

The Daytona Beach News-Journal reports it was the eighth arrest of a Volusia County student for making violent threats since the mass shooting that killed 17 people at Marjory Stoneman Douglas High School in South Florida on Feb. 14.

In Monday's incident, Gant says a school resource officer responded when the student stood up and said, "I'm going to bring out my Glock and shoot everyone."

The student told the deputy he was joking and doesn't have access to weapons.

Prosecutors and defense lawyers for Florida school shooting suspect Nikolas Cruz have reached an agreement on DNA and other samples he'll provide.

The Broward State Attorney's office says a court hearing on the matter scheduled for Tuesday was canceled because of the agreement.

In addition to DNA, prosecutors will get a hair sample from Cruz, as well as fingerprints and photographs.

The 19-year-old Cruz is charged with 17 counts of murder in the Valentine's Day shooting at Marjory Stoneman Douglas High School in Parkland, Florida. Police say Cruz confessed to the crime.

Cruz wasn't expected to appear at the hearing.

A judge has refused to step aside from the case of Florida school shooting suspect Nikolas Cruz as requested by his lawyers.

Cruz's lawyers claimed Scherer has made rulings and comments that indicate favoritism for prosecutors. They say in court papers that Cruz can't get a fair trial, but Scherer disagreed.

Cruz's lawyers' concerns revolve around a debate last week on whether to keep a defense confidential motion secret. Cruz, who's 19, is charged with 17 counts of murder in the Valentine's Day shooting at Marjory Stoneman Douglas High School in Parkland, Florida.

The suspect in the mass shooting at a Florida high school refused to let the district continue providing him with mental health services after he turned 18 and the superintendent of schools says federal law kept them from doing anything about it.

Broward Schools Superintendent Robert Runcie tells the Sun Sentinel "You can't make someone do something when the law says they have the right to make that determination."

Runcie says Cruz had attended a school with programs for emotionally and disabled students, and returned to Douglas in August 2016. By November, he says the "situation had deteriorated." With the support of his mother, Cruz refused special needs services and remained at the school until February 2017.

A court hearing on procedural matters for Florida school shooting suspect Nikolas Cruz has been canceled.

Court records show a hearing that had been scheduled for Tuesday is no longer on the docket. No immediate explanation was given.

Prosecutors had sought in the hearing to obtain an order allowing them to get hair and DNA samples from Cruz, as well as fingerprints and photographs.

The 19-year-old Cruz is charged with 17 counts of murder in the Valentine's Day shooting at Marjory Stoneman Douglas High School in Parkland, Florida. Police say Cruz confessed to the crime.

Cruz wasn't expected to appear at the hearing.

The Florida Senate Rules Committee has voted 9-4 for a bill that would raise the age to purchase rifles from 18 to 21 and create a three-day waiting period to buy the weapons.

Those rules are already in place for handguns. The bill also would make it easier to block gun sales or confiscate weapons from people who show violent tendencies or signs of mental illness.

The bill approved Monday also would let Florida counties authorize teachers to carry concealed weapons in school if they undergo law enforcement training and are deputized by the local sheriff's office.

But the committee refused to add an overall assault-style weapon ban in the bill, voting that amendment down 6-7 after more than two hours of testimony from dozens of gun safety advocates. Those advocates pleaded with lawmakers to ban weapons like the AR-15 used to kill 17 people at Marjory Stoneman Douglas High School on Valentine's Day.