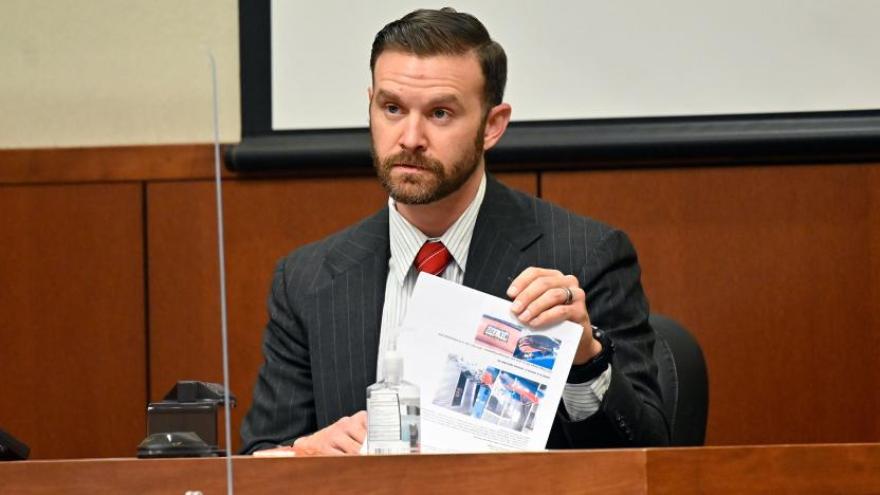 One of the officers involved in the deadly raid on Breonna Taylor's home, Sergeant Kyle Meany, seen here on February 23, has been terminated from the Louisville Metro Police Department.

(CNN) -- One of the officers involved in the deadly raid on Breonna Taylor's home, Sergeant Kyle Meany, has been terminated from the Louisville Metro Police Department.

Louisville Police Chief Erika Shields released the following statement Friday, "I made the decision to terminate Sergeant Kyle Meany after careful consideration and not with ease. I fully respect the judicial process and realize Sergeant Meany has yet to be heard before a jury of his peers. That being said, he is facing multiple federal charges after a lengthy investigation by the DOJ."

"As an employer, the character of our organization is paramount and it is not reasonable to expect continued employment under such conditions," her statement continued.

Taylor, a 26-year-old emergency room technician, was shot and killed in her apartment during a flawed forced-entry raid in the early hours of March 13, 2020. Her death, along with that of other Black people at the hands of law enforcement -- including George Floyd in Minnesota and Ahmaud Arbery in Georgia -- sparked a summer of protests calling for police reform.

Meany and two other officers, former Detective Joshua Jaynes and Detective Kelly Goodlett, were charged by the US Department of Justice on August 4 with submitting a false affidavit to search Taylor's home ahead of the Louisville Metropolitan Police Department's raid, and then working with other officers to create a "false cover story in an attempt to escape responsibility for their roles in preparing the warrant affidavit that contained false information," according to court documents, CNN previously reported.

Ex-detective Brett Hankison was charged with depriving Taylor and a guest in her home "of their constitutional rights by firing shots through a bedroom window that was covered with blinds and a blackout curtain," the DOJ said. He is alleged to have "willfully used unconstitutionally excessive force ... when he fired his service weapon into Taylor's apartment through a covered window and covered glass door."

He also faces charges of depriving three of Taylor's neighbors of their constitutional rights as, according to the indictment, the bullets he fired traveled through a wall in Taylor's home and into an adjacent apartment. Hankison, who fired 10 shots into Taylor's home and was acquitted of state wanton endangerment charges earlier this year, has been indicted on two federal counts of deprivation of rights under color of law. Only Hankison was charged at the state level.

The charges mark the first federal counts leveled against any of the officers involved in the botched raid. In addition to civil rights offenses, federal authorities charged the four with unlawful conspiracies, unconstitutional use of force and obstruction, Attorney General Merrick Garland said earlier this month.

"We share but we cannot fully imagine the grief felt by Breonna Taylor's loved ones and all of those affected by the events of March 13, 2020," Garland said. "Breonna Taylor should be alive today."

A conviction on the charge of willfully violating someone's rights carries a statutory maximum sentence of life in prison when the violation leads to death, according to the DOJ. A conviction on an obstruction count commands a maximum penalty of 20 years, and the conspiracy and false statement charges each carry maximum sentences of five years, the department said.

Taylor's mom, Tamika Palmer, said she's waited 874 days for federal charges to be filed and has beaten "everything sent to break" her. Her daughter's death has taken her to a "place that we can't even imagine," she said.