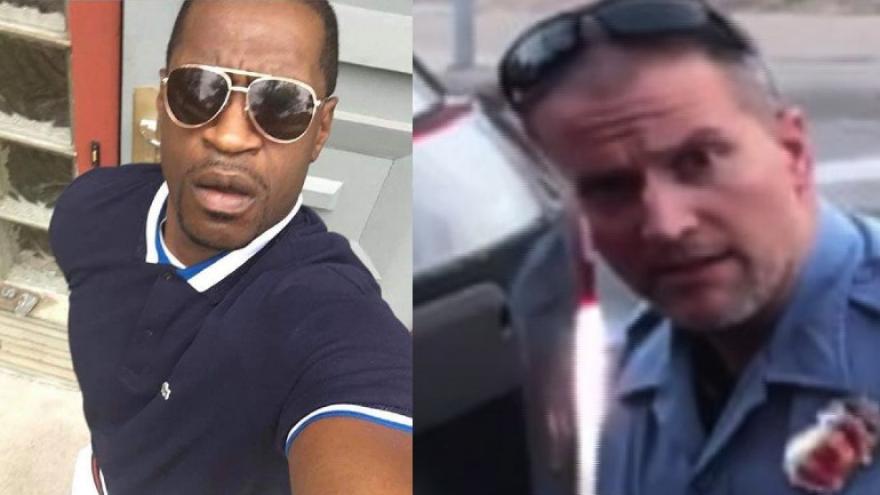 The former Minneapolis police officer seen in a video with his knee on George Floyd's neck has been arrested and faces charges of third-degree murder and manslaughter, according to Hennepin County Attorney Mike Freeman.

The officer, Derek Chauvin, was taken into custody Friday by the Minnesota Bureau of Criminal Apprehension, Commissioner of the Minnesota Department of Public Safety John Harrington said in a news conference.

The former Minneapolis police officer seen in a video with his knee on George Floyd's neck before the unarmed black man died this week was taken into custody Friday by state authorities, according to John Harrington, commissioner of the Minnesota Department of Public Safety.

The officer, Derek Chauvin, was taken into custody by the Minnesota Bureau of Criminal Apprehension as fires continued to burn from violent protests overnight as demonstrators demanded justice for Floyd.

"At this point we do not have any further information on charging decisions," Harrington said at a news conference. "That will be coming from the county attorney, but we did want to let you know that he is in custody."

CNN has reached out to Chauvin's attorney and the Minneapolis Police Union for comment.

"What the world has witnessed since the killing of George Floyd on Monday has been a visceral pain, a community trying to understand who we are and where we go from here," the governor said at a news conference.

Acknowledging protesters' pain, Walz said disorder in the streets distracts officials and the community from addressing the issues at hand.

"As we put a presence on the street to restore order, it is to open that space, to seek justice and heal what happened," he said. "I will not in any way not acknowledge that there is going to be that pain, but my first and foremost responsibility to the state of Minnesota is the safety and security of all citizens. We cannot have the looting and recklessness that went on."

Floyd was arrested Monday after heallegedly used a counterfeit bill at a convenience store, police have said. Outrage grew after a video surfaced showing a Minneapolis police officer kneeling on Floyd's neck. The 46-year-old, who was unarmed and handcuffed, cried out that he couldn't breathe.

Walz's comments came as fires continued to burn Friday across the Twin Cities, he said, spewing ash "symbolic of decades and generations of pain, of anguish."

Among the buildings set ablaze overnight was the Minneapolis Police 3rd Precinct, where protesters chanted Floyd's name and "I can't breathe." Some tossed fireworks toward the precinct, which is the one closest to where the incident was captured on video.

State police, donning protective gear and carrying batons, lined up Friday morning near the site littered with debris andsprayed mace at protesters who got too close. Some responded by throwing projectiles at the officers as others fled.

"There are no words in the English language that will convey the despair that I felt watching that man's life leave his body and him scream out for his mother," Alicia Smith, a community organizer, said Thursday afternoon of watching the video this week. "I heard my son saying, 'Mama, save me.'"

"My kids are little boys, and my son asked me, 'Am I gonna live to be a grown-up?'" she told CNN. "I gotta ruin his innocence and tell him how to exist as a young black boy in this country."

The four officers involved have been fired, but that has done nothing to quell calls that they face criminal charges.

Minnesota Attorney General Keith Ellison told CNN Friday morning that he had "every expectation" that charges would be filed against the officers. Ellison noted that the Hennepin County Attorney's Office is reviewing the case, not his office.

"They want to make sure they have a conviction that sticks," Ellison said, "and unfortunately, it is taking more time than any of us want."

Meantime, a CNN crew has been released from police custody in Minneapolis after they were arrested Friday during a live broadcast at the site after clearly identifying themselves to officers. CNN correspondent Omar Jimenez was placed in handcuffs while the cameras rolled, shortly followed by producer Bill Kirkos and photojournalist Leonel Mendez.

The state patrol said the crew was "released once they were confirmed to be members of the media." CNN disputed that characterization, saying, "Our CNN crew identified themselves, on live television, immediately as journalists."

Outrage grows to other cities

The Minneapolis Police Department said it evacuated staff from the 3rd Precinct for safety reasons. Authorities had set up a fence around it, but protesters pushed it over, officials said.

City officials warned protesters Thursday night to leave the precinct area, saying it may be in danger of exploding due to "unconfirmed reports" of severed gas lines.

More than 500 Minnesota National Guard personnel mobilized to several locations in the Minneapolis area, including banks, grocery stories and pharmacies.

Another community organizer, Shanene Herbert, told CNN Thursday prior to the night's events that young people had "every right to be angry."

"They have experienced trauma," she said. "Seeing your friends, your families and even yourself harassed by the police and killed by the police, it's traumatic. And they don't know what to do with that."

"What we've seen over the past several hours and the past couple of nights in terms of looting is unacceptable," Mayor Jacob Frey told reporters. "Our communities cannot and will not tolerate it."

But protesters in Minneapolis were not alone. In New York, Denver, Phoenix, Memphis and Columbus, Ohio, demonstrators demanded justice for Floyd, gathering in large crowds even as experts warned people to avoid big gatherings amid the coronavirus pandemic.

He acknowledged concerns about the rioting and looting, but said there was a deeper, root problem that needed to be addressed.

"In order to get to the bottom of this, we have to understand where the rage is coming from in the first place," he said. "As we all know, we've seen video after video ... we've seen that the people responsible go free. And it seems no one gets held accountable."

Seven people were shot overnight Thursday in Louisville, Kentucky, during protests over a separate case, the death of an EMT during a March police encounter. Meantime, the Ohio statehouse was broken into and damaged during protests Thursday evening in Columbus, the state Department of Public Security confirmed to CNN Friday.

Denver Mayor Michael Hancock pleaded with people to demonstrate peacefully, writing on Twitter, "March for justice and to see it served, but please march in peace."

About 70 people were arrested Thursday in New York, said New York Police Department Detective Adam Navarro, as crowds gathered near Union Square to protest Floyd's death. Charges range from obstruction of governmental administration to criminal possession of a weapon after a woman pulled a switchblade at Union Square, a law enforcement official said.

Local and federal officials have not announced any charges against the Minneapolis officers. But they said Thursday that the investigation is a top priority.

"We need to wade through all of that evidence and come to a meaningful decision, and we are doing that to the best of our ability," Hennepin County Attorney Michael Freeman said.

"We are going to investigate it as expeditiously, as thoroughly as justice demands," he added. "That video is graphic, horrific and terrible ... I am pleading with individuals to remain calm and let us conduct this investigation."

All four officers involved in the death have invoked their Fifth Amendment right against self-incrimination, Freeman said.

The US House Judiciary Committee urged the Justice Department to investigate, saying the federal government has a critical role to play in ensuring accountability for law enforcement organizations.

The officer seen with his knee on Floyd's neck had 18 prior complaints filed against him with the Minneapolis Police Department's Internal Affairs. It's unclear what the internal affairs complaints against Chauvin were for. Officials did not provide additional details.

But Minneapolis Police Chief Medaria Arradondo apologized, saying he understands the role his department has played in the chaos.

"I am absolutely sorry for the pain, devastation and trauma Mr. Floyd's death has left on his family, his loved ones, Minneapolis and the world,"  Arradondo said. "I know there is currently a deficit of hope in our city ... and I know our department has contributed to that deficit as a whole."

The victim's brother, Philonise Floyd, asked people to remain calm despite their pain and anger.

Meanwhile, in a late night tweet, President Donald Trump described the Minneapolis protesters as "thugs," and threatened to send the National Guard. "When the looting starts, the shooting starts," he said.