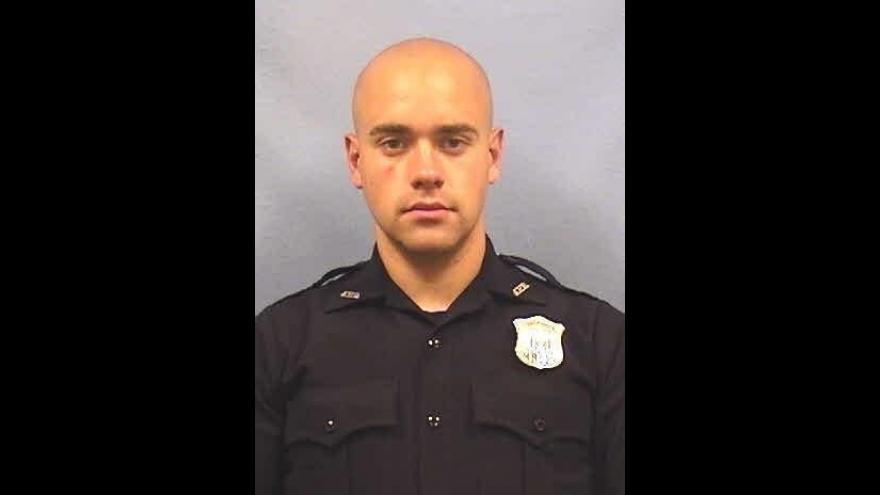 Garrett Rolfe, the former Atlanta police officer who shot and killed Rayshard Brooks at a Wendy's parking lot, has been charged with felony murder and other charges.

(CNN) -- A majority of Atlanta police officers scheduled to work in two of the city's six police zones did not report for work on Friday, law enforcement sources tell CNN.

This comes as the city is still reeling from the death of Rayshard Brooks, who was fatally shot by police officers last week. Both officers -- Garrett Rolfe and Devin Brosnan -- were charged in the shooting.

Rolfe was terminated and faces felony murder and 10 other charges in Brooks' death, which reignited a wave of protests nationwide against police brutality. Brosnan faces an aggravated assault charge for allegedly standing on Brooks' shoulders as he lay dying in the parking lot.

The Atlanta Police Department denied officers weren't showing up for their shifts, but a police union director backed the accounts by CNN sources. In some instances, officers were refusing to leave their precincts unless a fellow officer required backup.

This is the third straight day some officers have stayed out. As a result of the low staffing, the department is now putting officers normally assigned to major crime units on the street, in uniform, to answer 911 calls, the sources said.

Atlanta Interim Police Chief Rodney Bryant told officers in an email obtained by CNN Friday that he understands their anger and frustration.

"I'm not here to try to convince you that your anger and fear are not real," he wrote. "What I am here to tell is that that we -- all of us who wear a badge - are in this together and we support you."

Bryant wrote "these last three weeks have been some of the most difficult we've ever experienced in policing."

"None of us like what we saw in Minneapolis. Those actions do not represent the best of us," Bryant wrote. "Nonetheless, as it relates to what is happening here in Atlanta, with our own officers, all we can tell you is that these matters brought by the Fulton County District Attorney must now be allowed to play out in the justice system."

"When Mr. Brooks chose to attack two officers, to disarm one of them, and to point and fire a deadly weapon at Officer Rolfe, he took their lives, and his own, into his hands. He took the risk that their justified response might be a deadly one," Pines said Friday referring to the scuffle prior to Rolfe shooting Brooks.

"Although we can all understand the grief of Mr. Brooks' family, Officer Rolfe's actions were justified by the law."

"Never in my career have I seen a District Attorney act so unethically without regard for his professional obligations in pursuit of reelection," Pines said. "Twice in the past few weeks Paul Howard has put his own ambitions ahead of the good of his constituents as he seeks to capitalize on a series of national tragedies."

US Rep. Doug Collins of Georgia, a Republican, called for state Attorney General Chris Carr to appoint an independent district attorney in the case, he said in a statement Friday.

"Charging an Atlanta police officer with felony murder before the completion of the GBI's investigation was a political decision, not a legal one," Collins' statement read, adding that Georgians need to be ensured "this case is devoid of any and all political influence."

"If a special prosecutor was warranted in the Ahmaud Arbery case, then it certainly warrants the appointment of one here," Collins said.

Similarly, the Georgia Sheriff's Association was also not in favor of the district attorney's actions.

"Howard has trampled on the rights of Officer Garrett Rolfe and Officer Devin Brosnan and has further allowed this tragic incident to be more about his re-election than justice for the officers involved, the Atlanta Police Department and the citizens of our state," said Lumpkin County Sheriff Stacy Jarrard, who is the GSA president.

"The Sheriffs, through the Georgia Sheriffs' Association, condemn these actions of District Attorney Paul Howard and urge the public to allow time for justice to be served through close examination of the facts of this tragic incident," Jarrard's statement read. "Only then can confidence in the Fulton County District Attorney's Office and our system of justice be restored."

Officer moved from a jail over security concerns

Rolfe was moved from the Fulton County Jail to another facility in metro Atlanta for security reasons hours before he was scheduled to appear in court Friday, three law enforcement sources told CNN. He turned himself in Thursday and is being held without bond.

Rolfe waived his right to a first appearance in court Friday.

His attorneys did not appear in the courtroom, either.

One of them, Bill Thomas, told CNN in a statement, "The appearance has been waived and there will not be a need for any of his defense team to appear."

Officer says he has faith in the justice system

Both officers had gone to the fast-food restaurant to respond to a complaint that Brooks, 27, was parked and asleep in the drive-through lane. He failed a sobriety test, and when they tried to arrest him, he scuffled with them and grabbed Brosnan's Taser, the Georgia Bureau of Investigation said.

A video of the incident shows Brooks running as he appears to point the Taser in the direction of Rolfe, who shoots him twice in the back.

Attorneys for both men issued forceful statements defending their clients' actions that night. In an interview with MSNBC, Brosnan said he has "full faith" in the criminal justice system.

"I think this is a tragic event and it's ... a total tragedy that a man had to lose his life that night," he said. "My initial encounter with him, I felt he was friendly. He was respectful ... He seemed like someone who potentially needed my help. I was really just there to see what I could do for him, make sure he was safe."

Brosnan's attorneys criticized the rush to charge their client, saying he briefly put his foot on Brooks' arm to make sure he did not access a weapon. They said he also performed CPR, put anticoagulant in Brooks' wounds and applied compression bandages.

He has cooperated with all investigators and plans to meet with the Georgia Bureau of Investigation next week. But his lawyer Don Samuel said Brosnan is not going to answer the district attorney's questions while they bring false charges against him.

In an interview with CNN's Don Lemon on Thursday night, the district attorney reiterated that he expects Brosnan to cooperate with prosecutors.

"I realize that this young man is ... getting a lot of pressure from a lot of groups and some of his colleagues," Howard, the district attorney, said. "My expectation is when we move to the next level, I would expect him to follow through with what he has already promised."

Brosnan also faces two counts of violation of oath of office. He was released on a signature bond after turning himself in Thursday.

Prosecutors will not seek death penalty

If convicted of felony murder, Rolfe could face death. But Howard said he will not seek capital punishment.

He also faces five counts of aggravated assault, four counts of violating his oath of office and one count of criminal damage to property.

Prosecutors have said he kicked Brooks as he lay on the ground fighting for his life. But his attorneys have demanded to see a video of him doing that -- not just the still photo released by Howard.

"If there was a video of my client kicking Mr. Brooks, you would have seen it," attorney Lance LoRusso told Fox News. "(Howard) shows a still, and one leg is planted and the other one's bent. He could be leaning down to try to give him first aid. It could have been when he was trying to evaluate whether he needed handcuffs."

Rolfe reacted after he thought he "heard a gunshot and saw a flash in front of him," and feared for his safety and that of the civilians around him, his attorneys said.

Brooks' family applauded the charges against the officers as a good first step, but said they don't guarantee a conviction.

"This is not the finish line. This is the starting point. Yes, we appreciate and we commend the DA's office for charging these officers appropriately, but that's just step one," attorney Justin Miller said. "As you know, that doesn't always result in convictions."