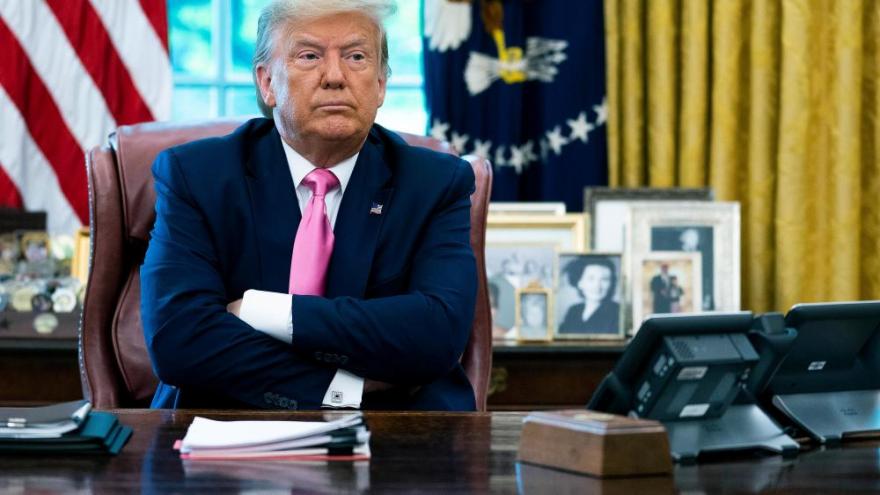 The US Office of Special Counsel said in a letter that President Donald Trump could deliver his Republican National Convention speech from the White House.

(CNN) -- The US Office of Special Counsel said in a letter Wednesday that President Donald Trump could deliver his Republican National Convention speech from the White House.

The letter from Erica Hamrick, the deputy chief of the US Hatch Act Unit, comes in response to a request from Rep. Carolyn Maloney, a New York Democrat who's the chairwoman of the House Oversight Committee, for an advisory opinion after Trump earlier this month floated the idea of delivering his speech accepting the Republican nomination on White House grounds. The letter was made public in a news release from Rep. James Comer, a Kentucky Republican who is the ranking member on the committee.

"The President and Vice President are not covered by any of the provisions of the Hatch Act. Accordingly, the Hatch Act does not prohibit President Trump from delivering his RNC acceptance speech on White House grounds," Hamrick wrote.

"However, White House employees are covered by the Hatch Act, so there may be Hatch Act implications for those employees, depending on their level of involvement with the event and their position in the White House."

Trump first entertained the notion of a White House speech in an interview with "Fox and Friends" earlier this month, stating, "Well, we are thinking about it. It would be easiest from the standpoint of security."

The President later tweeted that he had narrowed his location to either the White House or the site of the 1863 Battle of Gettysburg in Pennsylvania.

And while the President and vice president are exempt from the Hatch Act -- a federal law that generally forbids the use of government property for political activities -- some previous officeholders have sought to limit political activity in the White House, for instance, by holding political events elsewhere or in the residential spaces of the presidential mansion.

"This is an overt campaign act," Kedric Payne, general counsel and senior director of ethics at the Campaign Legal Center, told CNN last week about Trump's suggestion. "He's been riding the line in making statements about Biden at White House events. This is beyond the line."

Hamrick writes that "it is not possible to provide an exhaustive list of permitted or prohibited activities" but cites White House employees assisting with the RNC event as an example of a Hatch Act violation.

Still, White House chief of staff Mark Meadows has said he would prefer Trump give his speech "miles and miles away" from the White House.

"Those decisions are still in flux, but I can tell you what I'm advocating for is miles and miles away from here," Meadows said, referring to the White House complex in an interview that aired on Gray TV's "Full Court Press with Greta Van Susteren" Sunday morning.