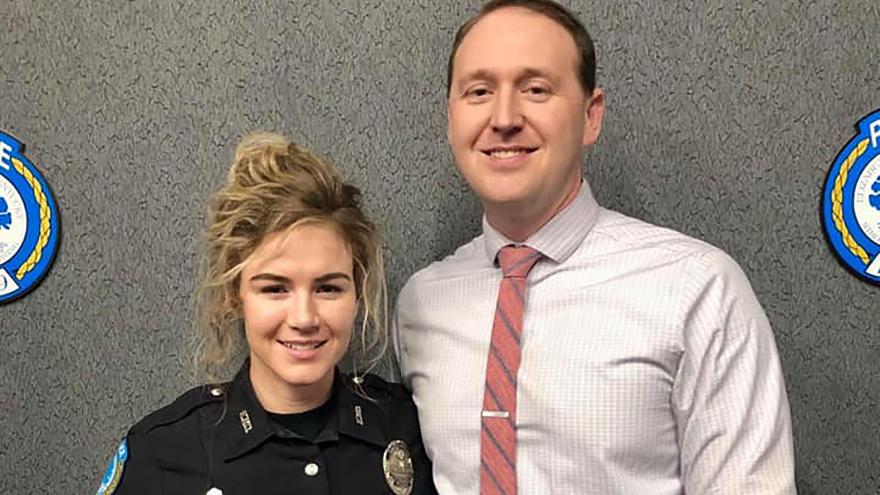 (CNN) -- Date night for two off-duty officers ended with them foiling a robbery at a restaurant chain in Kentucky.

Chase and Nicole McKeown are both police officers in Elizabethtown and have been married for six months.

The night started out normal when they went to Raising Cane's on Saturday, but things took a strange turn while they were eating dinner. A man came in wearing a mask and went up to the counter.

"I think we kind of both saw him at the same time," Nicole said during a news conference.

At first, she thought the man may be sick, given flu season, but soon realized the mask was for a less innocent reason, according to CNN affiliate WDRB.

Nicole said they saw the employee behind the counter put their hands up and that's when both realized what was happening.

The officers drew their weapons and chased the suspect out of the establishment. On surveillance video, the suspect can be seen dropping the weapon, WDRB reported. The couple continued to pursue him a few blocks away from the restaurant and held him at gunpoint until the Louisville Metro Police arrived and arrested him.

"It is my belief that if not for the heroic actions of these two officers the perpetrator's actions inside the business would have escalated, they acted honorable and heroically," said Deputy Dan Mason of the LMPD's robbery unit.

The couple said officer instinct just kicked in as the situation progressed.

"We both looked at each other and said 'Is this what's going on? OK let's go,'" Chase said.

"When it comes to peoples' live in danger, any other officer would have done the same thing," Nicole said.

The suspect is now in custody in Louisville, according to police.