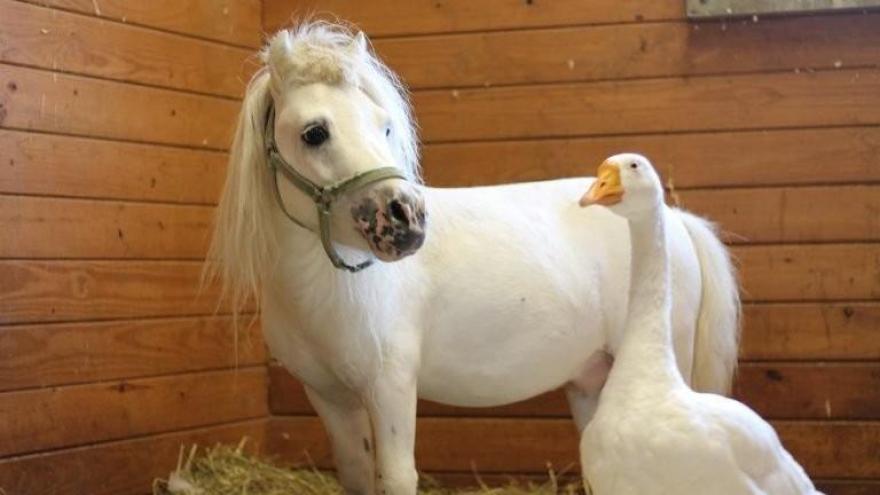 Hemingway the farm goose and Waffles the miniature horse were inseparable roommates at the Society for the Prevention of Cruelty to Animals in Bucks County, Pennsylvania.

(CNN) -- An unlikely pair that became an internet sensation has been adopted!

Hemingway the farm goose and Waffles the miniature horse were inseparable roommates at the Society for the Prevention of Cruelty to Animals in Bucks County, Pennsylvania.

"Their body language made it obvious that they're friends and that they better stay together," said Cindy Kelly of the Bucks County SPCA.

Thanks to human couple Nick and Maddie, Waffles, a 6-year-old miniature horse, and Hemingway the goose have a clean farm to call home -- forever.

The pair were rescued in July with two peacocks and a dozen ducks under warrant from a property Kelly said had "really filthy, unsanitary conditions."

But now that Waffles has recovered from an infection, "He's having a great time," Maddie told CNN affiliate WFMZ.

Maddie has rehabbed abused horses before and is eager for Waffles to settle into his new home.

"I like it when I sort of have to let them figure out how to be a horse again and that's what I'm most excited about with him. I think he just doesn't even know he's a horse. Maybe he thinks he's a goose," said Maddie.

That may be the case. While at the shelter, Hemingway the goose was extra protective of his friend, honking and flapping his wings when staff came to take care of the pair.

"When we go to give, have medicines or injections, Hemingway would get in between and say, 'I'm sorry that's my buddy the horse. He doesn't want a shot today,'" said Linda Reider with the Bucks County SPCA.

Hemingway is sassy and his companion Waffles is described as peppery.

"I love his butthead personality, and he knows it," Maddie chuckled.

The surprising interspecies friends are still being introduced to the rest of the animals on the farm, which Maddie and Nick hope will lead them to "eventually, hopefully, be one big happy family."