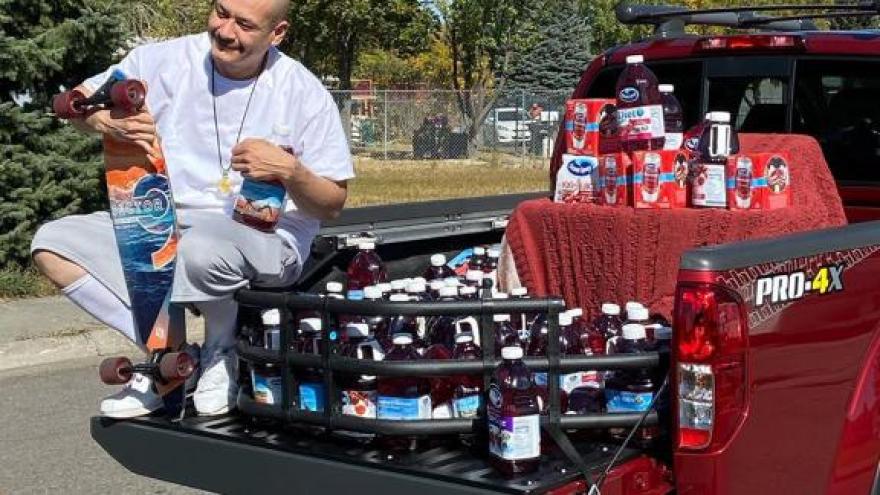 (CNN) -- Ocean Spray is giving back after a TikTok video featuring one of their products exploded online.

The video, posted by Nathan Apodaca -- perhaps better known to some as 420doggface208 -- was as simple as it comes: He rides a long board down the road, drinking Ocean Spray, while lip-syncing to Fleetwood Mac's "Dreams."

It wasn't fancy, it wasn't crazy, but everyone went wild for the Idaho man's vibe. Even Mick Fleetwood posted his own version of the video as the first post on his TikTok account.

But there was a reason Apodaca was on that board -- his car broke down and he had to get to work.

"My car shuts off from time to time, and it shut off down the highway... I didn't want to wait to flag someone down to get a jump. So I grabbed my juice and grabbed my board," he told CNN on Wednesday. He added that it wasn't necessarily an uncommon experience.

Aside from making him an instant star, the video brought Ocean Spray a tidal wave of free publicity. Now, the juice company's giving back -- this week it surprised Apodaca with a new ride.

"I hear a knock...so I get up and open the door. I poke my head around the corner and then there's a camera behind (my daughter), camera behind that camera man...I'm like what the heck is going on?" Apodaca said. "I didn't add two and two together until they told me it was mine and even then I didn't believe it."

And yes, the truck was the color of cranberry.

Apodaca can be heard saying "no way" as the company representatives explain that it really is his to keep. Apodaca then shared a fun video of him driving away in the truck, posting his thanks on his own account.

Ocean Spray CEO Tom Hayes then took to his own TikTok on a longboard to do a copycat version of the original video, keeping the vibes rolling.