Ocean-exploring robot could search for lost cities and shipwrecks 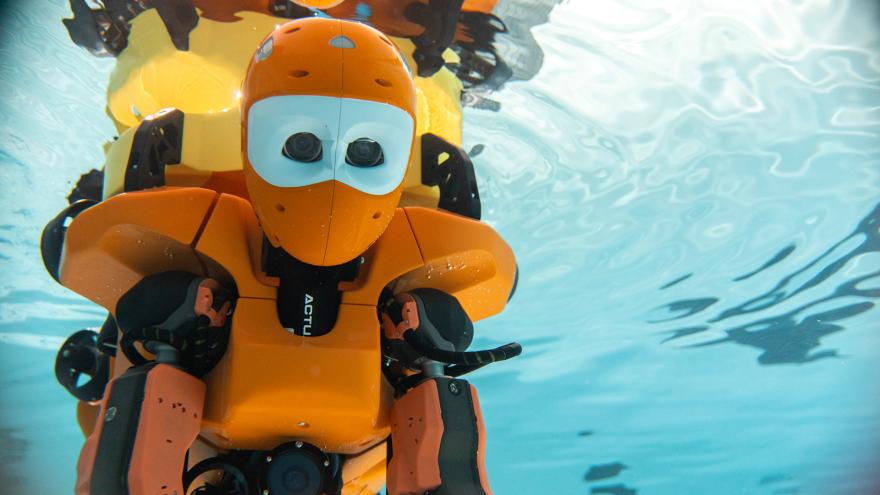 (CNN) -- The ocean is full of mysteries that lead to legendary lore.

During a recent moonlit harbor excursion, conversation quickly turned to tales of piracy and exploration.

A guide shared stories from the days when tall masts and billowing sails loomed over coastal skylines -- and intriguing characters such as Blackbeard and Barbarossa sailed the seas.

We couldn't help but wonder about the secrets that went down with shipwrecks and lost artifacts scattered across the ocean floor. But these sites are hidden deep beneath the waves where humans typically can't reach.

However, one explorer is venturing to places no human has gone before.

At first glance, OceanOneK looks a bit like a diver descending through the waters off the coast of France.

Stanford University researchers designed the robot to go underwater to explore sunken planes, ships, submarines and perhaps even lost cities. And this year, the humanoid robot reached a new milestone when it dove half a mile (852 meters) beneath the ocean's surface.

The robot has hands that can cradle priceless artifactsand bring them to the surface and stereoscopic eyes that capture the world of the deep in full color.

But another feature makes the robot even more special -- a touch-based feedback system. This interactivity allows itsoperators to feel everything they might experience if they were diving themselves -- the water's resistance and touching objects such as vases and oil lamps from an ancient Roman ship.

Archaeologists have uncovered telltale timbers that may have belonged to a centuries-old shipwreck -- one that likely inspired the cult classic "The Goonies."

A volunteer team found more than 20 pieces of wood in a cave off the coast of Oregon in June. The timbers belonged to the 1693 shipwreck of the Santo Cristo de Burgos.

The Spanish galleon wasn't loaded with treasure, but local lore and the ship's mysterious fate have become storied over time -- possibly enough to inspire Steven Spielberg as he created his 1985 film about teens in Astoria searching for pirate's treasure on the Oregon coast.

The discovery has reignited interest in searching for more parts of the wreck. After all, "Goonies never saydie!"

Penguins may reign supreme in Antarctica, but they also live across the wilds of Patagonia in South America. In these remote places, scientists and conservationists dedicate their lives to protecting the flightless marine birds.

Gentoo, Magellanic and king penguins act as beacons for how ecosystems are responding to the climate crisis.

"It's the perfect animal to get to know the ocean better," marine biologist Andrea Raya Rey said.

The king penguin colony on Tierra del Fuego disappeared 200 years ago due to overhunting -- but they've made an unexpected comeback.

Learn more during Sunday's episode of the CNN docuseries "Patagonia: Life on the Edge of the World" at 9 p.m. ET/PT. Every new episode of the six-part series will be available on CNNgo the day after it airs on television. You can also access CNNgo via our CNN app.

Astronomers have found a "black widow" in space, and this dead star has grown to record-breaking size by feasting on another celestial object.

Much like its namesake arachnid, the neutron star is devouring its companion star. This pulsating, cosmic lighthouse also spins a dizzying 707 times per second.

The neutron star, or the dense, collapsed remains of a colossal star, weighs more than twice the mass of our sun -- making it the heaviest one ever observed. When these objects become too hefty, they usually collapse and form a black hole, so this one could be the limit for neutron stars.

Meet a rare Gorgosaurus, a relative of T. rex -- but with more speed and a stronger bite. The 77 million-year-old fossil was sold for just over $6 million this week during a Sotheby's auction.

This specimen is just one of a few dinosaur skeletons that have made their way to the bidding block -- a trend that troubles scientists. When fossils are auctioned, it's possible they will end up in private collections, which means paleontologists can't study them.

Whoever bought the "fierce lizard" remains unknown, but the buyer will have the unusual opportunity to name it.

Settle in with these reads:

-- Fossils show that sharks have been on Earth longer than trees and dinosaurs -- and there's an ocean phenomenon that's bringing them closer to shore this summer.

-- The first mission to return samples from another planet will touch down on Earth in 2033, and two Ingenuity-style helicopters will help retrieve the Martian rocks.

-- Photographer Joel Sartore is on a mission to capture images of 20,000 species to prevent the extinction of creatures great and small. See some of these endangered species through Sartore's lens.

And keep your eye on the night sky this weekend for a meteor shower. Here's how to watch.