Ocasio-Cortez won't commit to backing Biden in 2024: 'We'll cross that bridge when we get to it' 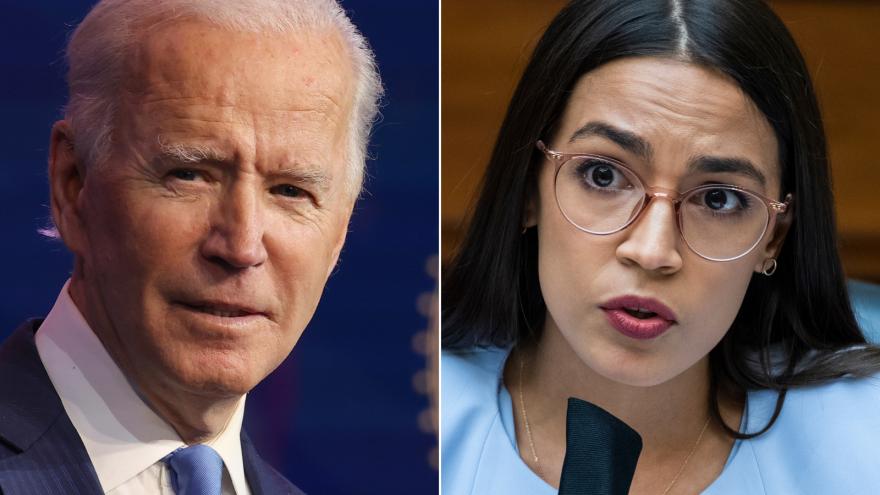 (CNN) -- New York Rep. Alexandria Ocasio-Cortez on Sunday would not commit to backing President Joe Biden in the 2024 presidential election, saying instead that "we'll cross that bridge when we get to it."

"I think if the President has a vision, then that's something certainly we're all willing to entertain and examine when the time comes," Ocasio-Cortez, a Democrat who wields a significant amount of influence over the party's progressive wing, told CNN's Dana Bash on "State of the Union" when asked if she plans to support Biden in his 2024 reelection bid.

"That's not a yes," Bash said, to which the congresswoman replied: "We should endorse when we get to it, but I believe that the President's been doing a very good job so far, and, you know, should he run again, I think that I, you know, I think ... we'll take a look at it.

"But right now, we need to focus on winning a majority instead of a presidential election," she added, referring to this year's November midterm elections.

The White House said last year that Biden intends to run for reelection in 2024, following a report indicating that the commander in chief and his staff are attempting to assuage concerns about his future political prospects.

The Washington Post reported at the time that Biden and members of his inner circle have been telling allies that he plans to run again -- an attempt to address concerns about whether he could commit to another presidential campaign given his age and ease worries Republicans returning to power.

One of Biden's close allies, Democratic Sen. Chris Coons of Delaware, said Sunday that he expects the President to run for reelection in two years.

"As of now, it is my understanding that the President is seeking a second term," he said on Fox.

CNN reported earlier this year that a significant number of both Democrats and Republicans currently hope to see their parties find alternatives to President Joe Biden and former President Donald Trump in the next presidential election, according to a new CNN poll conducted by SSRS in January and February. But very few have specific candidates in mind, underscoring how distant -- and potentially mutable -- the 2024 race remains.

Unlike Biden, Trump has yet to officially announce another bid for the White House, though he frequently teases another run and still maintains influence over his party's direction more than a year after leaving office.