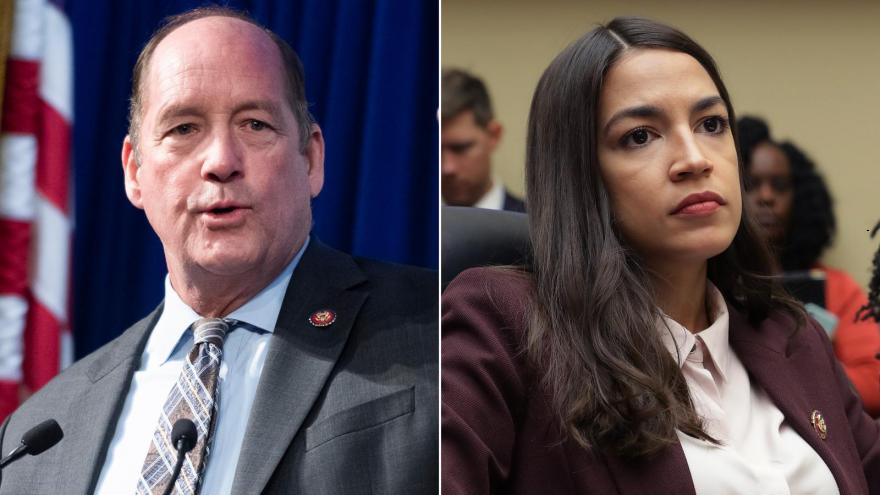 Democratic Rep. Alexandria Ocasio-Cortez of New York on Friday rejected Florida GOP Rep. Ted Yoho's claim that "no one was accosted, bullied or attacked" during their tense exchange this week on the steps of the Capitol.

(CNN) -- Democratic Rep. Alexandria Ocasio-Cortez of New York on Friday rejected Florida GOP Rep. Ted Yoho's claim that "no one was accosted, bullied or attacked" during their tense exchange this week on the steps of the Capitol, saying that Yoho and a Texas Republican lawmaker were both lying as she revealed new details about the viral incident.

"If he wants to continue to lie, that's his business," Ocasio-Cortez told CNN Friday.

In the interview, Ocasio-Cortez added more detail about Yoho's broadside before he reportedly called her a "f*cking b*tch" within an earshot of a reporter from The Hill newspaper. Ocasio-Cortez was walking up the east front steps of the Capitol to cast a vote Monday afternoon when both Yoho and Texas GOP Rep. Roger Williams approached her as they were walking down the steps.

Yoho erupted at her instantly and kept "escalating the situation," she said.

"Do you really believe that people are shooting and killing each other because they're hungry? You know, You're unbelievable. You're disgusting," Yoho said, according to Ocasio-Cortez, saying the Florida conservative was wagging his finger at her.

Ocasio-Cortez then said she "tried to calm him down, but he wouldn't."

"And then I just told him he was being rude and he got even more angry, when I called him rude," she said.

She added, "He was walking down the steps with Yoho, shoulder to shoulder. And at this point, they were just yelling at the world," referring to the two men.

Yoho's office didn't respond to a request for comment from CNN. But speaking Friday night on Fox News, Yoho claimed he didn't call Ocasio-Cortez "disgusting," though a reporter had heard him say it. And he contended it was simply a policy dispute.

"I asked her, I said, 'Hey, do you have a minute?' She goes, 'Yes.' And we've never had a conversation before, and I wanted to ask her about this policy that she was telling people it was OK to shoplift if you're hungry. And it went backwards from there."

On Friday, Williams refused to talk about Ocasio-Cortez's claim that he was involved in bullying her. He said "no" when asked if he heard Yoho call her "disgusting." And he would not discuss the incident further or the allegations from the New York Democrat.

"We put a statement on it right after it happened," Williams told CNN. "I'm not going to talk about any of it."

When first asked about the incident by The Hill reporter who observed the exchange, Williams claimed he wasn't paying attention to the back-and-forth.

"I was actually thinking, as I was walking down the stairs, I was thinking about some issues I've got in my district that need to get done," Williams told the newspaper. "I don't know what their topic was. There's always a topic, isn't there?"

"The fact that Rep. Williams is denying that he had even said it and then told a reporter right afterward that he was thinking about issues in his district is quite laughable," she said. "And it just speaks to a lack of integrity that not only he had in that moment, but lack of integrity that he continues to have by simply not just owning up and saying, 'Listen, this was a lapse of judgment. I'm sorry. I should have said something. Or I'm sorry for what my colleague did.'"

Ocasio-Cortez said Friday they "think their little man card will be taken away if they apologize for their absurd behavior."

After the incident was reported in the press, Yoho went to the floor Wednesday and said, "I rise to apologize for the abrupt manner of the conversation I had with my colleague from New York. It is true that we disagree on policies and visions for America, but that does not mean we should be disrespectful." He denied calling her a "f*cking b*tch," though his office said he was calling her policies "bullshit."

On the floor, Yoho went onto talk about his wife of 45 years, two daughters and argued he was "passionate about those affected by poverty."

"I cannot apologize for my passion or for loving my god, my family and my country," he added.

Then on Thursday, Ocasio-Cortez went to the floor and delivered a more than nine-minute speech calling out Williams and Yoho for their actions. She said that Yoho came to the House floor "to make excuses for his behavior."

"What I do have issue with is using women, wives and daughters as shields and excuses for poor behavior," she said. "Mr. Yoho mentioned that he has a wife and two daughters. I am two years younger than Mr. Yoho's youngest daughter. I am someone's daughter too. My father, thankfully, is not alive to see how Mr. Yoho treated his daughter."

In response, Yoho said in a statement that Ocasio-Cortez was exaggerating the exchange and denied again using the sexist slur against her, saying she has "every right" to "give her account of the conversation but she doesn't have the right to inflate, talk about my family, or give an account that did not happen for political gain. The fact still remains, I am not going to apologize for something I didn't say."

Asked about that statement, Ocasio-Cortez said, "We are not discussing an accusation. This is not an accusation that I am making. This is a reported incident in the press."

The Monday exchange was brief, she said, lasting roughly 20-30 seconds. She said she doesn't recall ever interacting with him before Monday.

"Because another area where he's not telling the truth is that he keeps using this word 'conversation,'" Ocasio-Cortez said. "There was nothing conversational about it. I was walking. He came up to me, accosted me and then I walked away because he kept escalating the situation."

This story has been updated with additional comments from Rep. Ted Yoho.