Obamas, Bushes and Clintons teaming up in effort to aid Afghan refugees 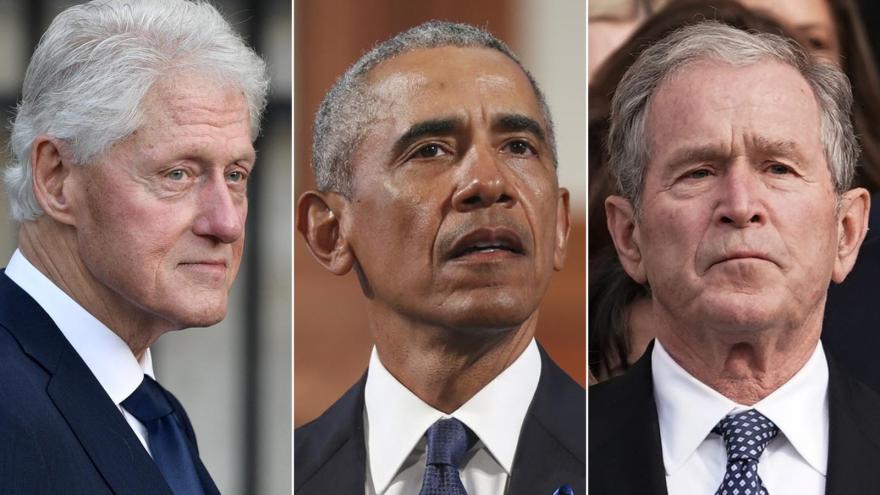 (CNN) -- The Presidents' club is teaming up to aid in a massive, bipartisan effort to welcome and support Afghan refugees that is being launched Tuesday.

Welcome.US, the group said in a news release, is aimed at engaging "all Americans to welcome and support refugees, beginning with the individuals and families who fled Afghanistan" following the American withdrawal from the nation in recent weeks. After the biggest military evacuation in history, the Biden administration is now tasked with resettling more than 60,000 Afghan refugees in the US over the next several weeks.

About 17% of those who have already arrived are US citizens and lawful permanent residents and can head to their destinations without first passing through military bases. The rest, however, will go to bases to receive medical screening -- including Covid-19 vaccinations -- before they're relocated to communities around the country.

Welcome.US has gathered the former presidents -- as well as a bipartisan group of governors, including Maryland Republican Gov. Larry Hogan and Colorado Democratic Gov. Jared Polis, and other leaders -- to serve as a central point of contact for public and private efforts to help in the massive effort to help Afghan refugees as they establish lives in the US. It will connect and coordinate efforts among state and local governments, as well as non-profit organizations, corporations, universities and others, according to the group.

It will provide grants to non-profit organizations and will launch a six-figure advertising campaign "to highlight the need for all Americans to join the thousands of people who've already stepped up to welcome our new Afghan neighbors as they get settled and build their new lives." Also among those efforts, the group said in the news release, are support for housing via Airbnb; meals via Instacart; grants from Walmart, Starbucks and Microsoft; and ad credits from Facebook to promote the organization.

"Thousands of Afghans stood with us on the front lines to push for a safer world, and now they need our help," the Bushes said in a statement on the organization. "We are proud to support Welcome.US and the work to help Afghan families get settled and build new lives. We stand ready to show our new Afghan neighbors and the rest of the world how a welcoming and generous spirit forms the backbone of what makes our country so great."

It was not immediately clear whether former Presidents Donald Trump or Jimmy Carter had been invited to participate in the effort, and a spokesperson for the group did not immediately respond to CNN's request for comment.

Clinton and Obama joined President Joe Biden on Saturday for an observance of the 20th anniversary of the September 11 terrorist attacks in New York City. Bush spoke at another 9/11 observance event in Shanksville, Pennsylvania, alongside Vice President Kamala Harris.

Trump, however, commemorated the 20th anniversary in a short video in which he praised first responders and lambasted Biden for the handling of the withdrawal from Afghanistan, before providing commentary on a boxing match.

Bush, meanwhile, used his remarks in Pennsylvania to criticize Trump without directly naming him.

It's not the first crisis effort where former presidents have joined together for a common cause.

Bush and Clinton came together in 2005 to raise funds for those impacted by the tsunami in Indonesia and again in 2010 to establish the Clinton-Bush Haiti Fund to aid with long-term recovery following a catastrophic earthquake in that nation.