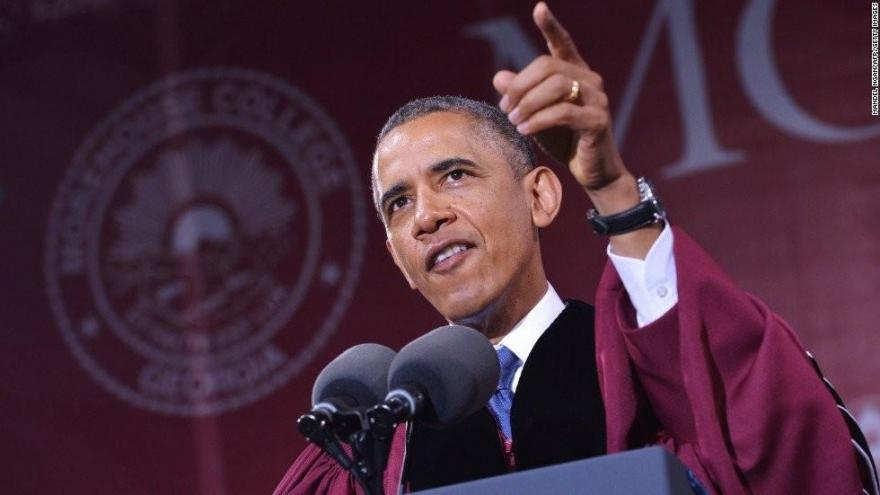 Former President Barack Obama announced Tuesday that he and former first lady Michelle Obama will deliver several virtual commencement addresses in the coming weeks as high schools and universities across the nation are forced to hold their ceremonies online due to the coronavirus pandemic.

(CNN) -- Former President Barack Obama announced Tuesday that he and former first lady Michelle Obama will deliver several virtual commencement addresses in the coming weeks as high schools and universities across the nation are forced to hold their ceremonies online due to the coronavirus pandemic.

"I've always loved joining commencements -- the culmination of years of hard work and sacrifice," the 44th president wrote on Twitter, announcing the dates of the speeches.

"Even if we can't get together in person this year, Michelle and I are excited to celebrate the nationwide Class of 2020 and recognize this milestone with you and your loved ones."

The Obamas' announcement comes after multiple calls for the pair to address graduating students virtually, including one that picked up steam in April from a graduating high school senior. Various organizations have announced commencement programming featuring speakers such as former Secretary of State Hillary Clinton.

On June 6 at 3 p.m. ET, the former president and first lady will deliver separate addresses and a joint message to students as part of YouTube's "Dear Class of 2020" celebration. According to a release from the Obamas, other contributors to the program include Malala Yousafzai, former Defense Secretary Bob Gates and former Secretary of State Condoleezza Rice.

President Obama will also participate in "Graduate Together: America Honors the High School Class of 2020" on May 16, which is a program hosted by the XQ Institute, The LeBron James Family Foundation and The Entertainment Industry Foundation. During the 8 p.m. ET address, the 44th president will be joined by high school students including seniors from Chicago Public Schools and members of the Obama Youth Jobs Corps. He will also deliver a speech addressing the high school class of 2020 during this event.

A source involved in the planning told CNN's Brian Stelter that CNN would also be carrying the event.

Also on May 16, President Obama will share a message for graduates and families from 74 historically black colleges and universities at "Show Me Your Walk, HBCU Edition," a program presented by Chase in partnership with the Thurgood Marshall College Fund, the United Negro College Fund, the National Association for Equal Opportunity, the National Basketball Association, Paul Quinn College, Howard University and JPMorgan Chase's Advancing Black Pathways Initiative. It will be livestreamed at 2 p.m. ET.

Obama gave several commencement addresses while he was president, but these addresses will be his first since he left office. His successor, President Donald Trump, plans on delivering the 2020 commencement speech at the US Military Academy at West Point, New York, in an in-person ceremony on June 13, bringing approximately 1,000 graduating cadets back to campus to attend the event.