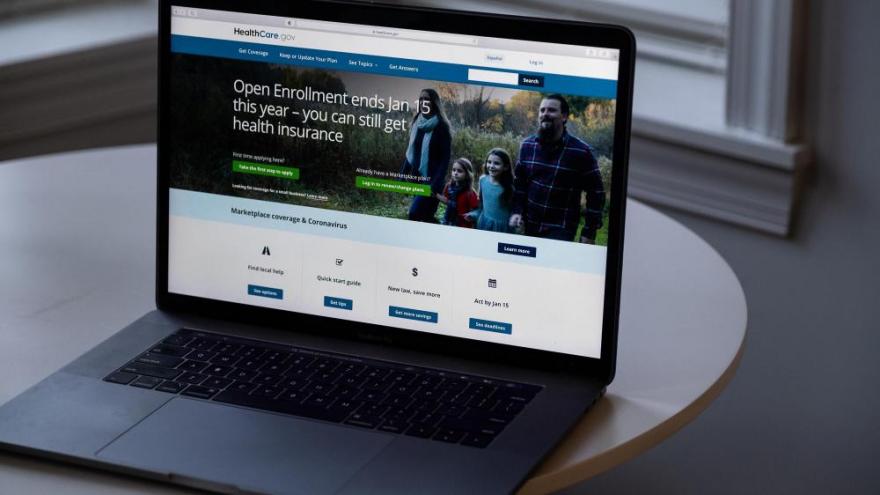 (CNN) -- Those interested in Affordable Care Act coverage for 2022 have until the end of Saturday to sign up in most states.

Open enrollment, which lasted a month longer than under the Trump administration, ends January 15 in the 33 states that use the federal exchange, healthcare.gov, and in several states that run their own marketplaces.

Certain states, such as New York and California, have extended the deadline by a few weeks. Idaho, on the other hand, ended its open enrollment in mid-December.

More than 14.2 million people had signed up for coverage on the federal and state exchanges as of January 8 -- a record number for the 9-year-old program. That includes more than 10 million who have selected plans or were automatically reenrolled through healthcare.gov. A total of about 12 million people signed up during open enrollment for 2021 coverage.

"Americans need, they want and they deserve quality, affordable health care," Health and Human Services Secretary Xavier Becerra, told reporters Thursday. "Anyone who has ever lived without health coverage knows the peace of mind that comes from having access to care when you need it. Thanks to the Affordable Care Act, they're getting it."

Obamacare is proving particularly popular in GOP-led states that have not expanded Medicaid to low-income adults, including Florida and Texas.

The surge in interest in the Affordable Care Act comes as the Biden administration and the Democratic-led Congress have pumped more resources into the landmark health care law.

This year, enrollees pay no more than 8.5% of their incomes toward coverage, down from nearly 10%. And lower-income policyholders receive subsidies that eliminate their premiums. Also, those earning more than 400% of the federal poverty level are now eligible for help for the first time.

Four out of five consumers are finding plans for $10 or less a month, Becerra said. More than 90% of those on the federal exchange are getting financial assistance for coverage.

But this generous aid expires after 2022, leading some consumers and experts to worry about what will happen next year, when premiums would likely rise. President Joe Biden's Build Back Better plan would extend the subsidies through 2025, but it remains stalled in the Senate.

Beefing up marketing and outreach

To let Americans know about the extra assistance available now, the Biden administration has launched an extensive outreach and marketing campaign.

The Centers for Medicare and Medicaid Services, which oversees the federal exchange, is teaming up with local groups to spread the word and concentrating its media efforts on local markets. It has added six additional languages to its marketing campaign.

The Biden administration is also pouring money into enrollment assistance -- which serves the dual purpose of reaching folks in local communities and helping them sign up for plans. The number of navigators has quadrupled to more than 1,500 this year, with assistance available in nearly every county served by the federal exchange.

Those who miss the deadline can still enroll in Affordable Care Act coverage throughout the year through a special enrollment period if they meet certain criteria, such as losing their jobs and work-based coverage, getting divorced or having children.

The Biden administration has also made it easier to qualify for these special enrollment periods. Low-income folks can sign up if their premiums would be $0 after federal subsidies.

Some 2.8 million people selected policies for 2021 coverage last year after Biden launched a six-month special enrollment period, which allowed the uninsured to sign up for policies and enrollees to take advantage of the enhanced subsidies.