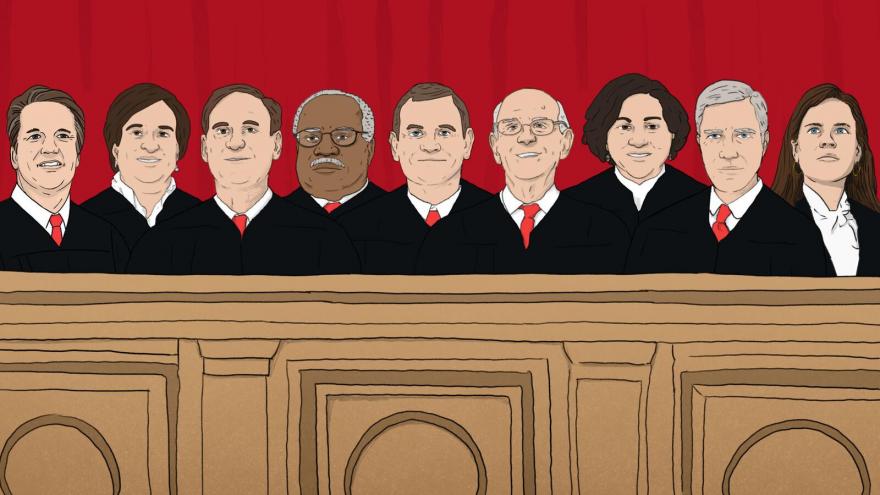 The Supreme Court is staring at its self-imposed end of June deadline, but the justices have not yet released some of the most significant opinions of the term.

(CNN) -- The Supreme Court is staring at its self-imposed end of June deadline, but with only weeks to go the justices have not yet released some of the most significant opinions of the term, including a challenge to the Affordable Care Act, the Voting Rights Act and a case on religious liberty involving a Philadelphia foster agency.

Recent weeks have seen justices clear their desks of those opinions that produce fewer divisions, as the tension grows for the big-ticket cases.

At the same time, eyes are on any retirement plans of Justice Stephen Breyer, 82. His departure would allow President Joe Biden and Senate Democrats to replace him with a much younger liberal. Justices have often announced their retirements at the end of a term.

RELATED: The art of persuasion: How past presidents have tried to nudge Supreme Court justices off the bench

Here's what the court has on its docket:

Republican-led states -- aided by the former Trump administration -- are trying to get the court to invalidate the entire Affordable Care Act, former President Barack Obama's most significant legislative achievement.

The case marks the third time the court heard a significant challenge to the 2010 law, although the stakes are heightened given the implications of Covid-19, the catastrophic deaths and the current burdens facing the health care industry.

As things stand, Texas and other Republican-led states are challenging the law and California and other Democratic-led states, the House of Representatives and the Biden administration support the law.

In one of his first acts as president, Biden informed the court that his government was reversing the position taken by the Trump administration. The Department of Justice now argues that even if the individual mandate is constitutional and that even if the court finds otherwise, it should sever the mandate and allow every other provision to stand.

At issue is a major dispute pitting claims of religious liberty against the LGBTQ community. It comes as the new conservative majority has moved aggressively to protect rights under the Free Exercise Clause of the Constitution.

In the case heard in early November, Philadelphia froze the contract of a Catholic foster agency because the agency refused to work with same sex couples as potential foster parents. The agency, Catholic Social Services, sued under the First Amendment.

Philadelphia defended its action, saying the agency violated anti-discrimination laws that are neutral and applicable to everyone.

Supporters of LGBTQ rights support the city, arguing it was within its rights to freeze the contract to an organization receiving taxpayer funds and turning away same sex couples. They fear that a decision in favor of CSS would clear the way for religious organizations to get exemptions from non-discrimination laws in other contexts.

Supporters of expanding religious liberty rights hope the court's conservative majority, expanding upon a trend from last term, will continue to hold the government to a higher standard when it comes to regulations that impact religious believers.

The Supreme Court is considering two provisions of Arizona law that the Democratic National Committee says violate the historic Voting Rights Act that prohibits laws that result in racial discrimination.

One part of the state law requires that in-person Election Day voters cast their votes in their assigned precinct. Another provision says that only certain persons -- family, caregivers, mail carriers and elections officials -- may deliver another person's completed ballot to the polling place.

Eight years ago, Chief Justice John Roberts wrote the 5-4 majority opinion in Shelby County v. Holder, effectively gutting Section 5 of the Voting Rights Act, a provision that required states with a history of discrimination to obtain the permission of the federal government or the courts before enacting new laws related to voting.

Since that decision, challengers to voting restrictions have increasingly turned to Section 2 of the law, that holds that no voting regulation can be imposed that "results in a denial or abridgment of the right of any citizen of the United States to vote on account of race or color." Democrats fear the new conservative majority on the court will now weaken Section 2.

The case comes as Republican state legislators across the country are also moving at a fast clip to pass laws to restrict voting access.

The justices are considering a case about when a police officer needs a warrant to enter the sanctity of an individual's home. In general, in such circumstances a warrant is required, although the Supreme Court has held that under certain exigent circumstances, a warrant is not required.

If, for example, an officer is in "hot pursuit" of a driver or if emergency aid is needed a warrant is not always necessary.

The case at hand explores whether a categorical exception to a warrant holds up if the officer thinks the person he is following in "hot pursuit" committed a less serious offense: a misdemeanor. It's the first time the justices have looked at the scope of the "hot pursuit" doctrine when it comes to a minor violation.

The case offers the Supreme Court the opportunity -- for the first time in decades -- to examine the relationship between NCAA spending limits and student athletes who are seeking compensation for their talents.

At issue is a lower court ruling that struck down spending caps for "education related benefits" because, the court held, they violated antitrust laws. The NCAA is asking the Supreme Court to reverse the decision arguing that it is going to allow money to pour into the system under the guise of "education" which will destroy the distinction between amateur and pro sports. A lawyer for a class of students said the lower court got it right, and worried about the exploitation of students.

The Supreme Court is again considering the power of union organizers in a case that pits agriculture businesses and privacy rights advocates against big labor and raises questions of when the government can allow access to private property without compensation. A ruling against the union position in the case would come after the Supreme Court in 2018 dealt a blow to the funding of public-sector unions.

The case is brought by agricultural growers challenging a California state law that allows union organizers onto their property to speak to workers unannounced. They say it amounts to a government "taking" of the land without just compensation.

The Biden administration is supporting the union's position, a change from the Trump administration, which had backed the employers.

Conservative non-profits Americans for Prosperity (a Koch-affiliated group) and the Thomas More Law Center are challenging a California law that requires charitable organizations that solicit donations to disclose a list of their contributors to the state attorney general.

The groups say they want to keep their donors secret and that the state has not shown a compelling reason for the law. They argue that the law will chill contributors from coming forward for fear of harassment -- in violation of the First Amendment. Although the information is supposed to be confidential, the groups say that the state may make inadvertent disclosures.

In response, California argues that the groups already have to file the same data with the IRS and the state needs the information as it tries to combat fraud related to charities. Three other states -- New York New Jersey and Hawaii -- have similar laws.

The case is being closely watched by those who fear it could lead to more anonymous "Dark Money" flowing into the system.

"The nonprofits are asking the Supreme Court to make it harder for the government to require the disclosure of donor information," said Lloyd Hitoshi Mayer, an expert on campaign finance at Notre Dame Law School. "While the case is about a state Attorney General asking for this information, if the Supreme Court raised the bar here, that would likely also apply to election donor disclosure laws down the road."

The justices are looking at a First Amendment case concerning the authority of public school officials to discipline students for what they say outside of school.

Then-junior varsity cheerleader Brandi Levy, who didn't make the varsity squad lashed out on social media while she was off campus, writing, "f--k school f--k softball f--k cheer f--k everything." The words were accompanied by a picture of her giving a middle-digit salute.

After the outburst, the girl was suspended from the squad as having violated team and school rules. Lawyers for the girl sued alleging the school had violated her freedom of speech. The girl won in the lower courts that held that school could not remove her for off campus speech. According to the court of appeals, she did not "waive her First Amendment rights as a condition of joining the team."

Back in 1969, the Supreme Court held that public school officials could regulate speech that would "materially and substantially interfere with the requirements of appropriate discipline in the operation of the school." But that decision concerned speech at school.

"Empowering public school officials to censor what students say when they are outside of school would be an epic restriction of young people's freedom of expression," said Witold Walczak of the ACLU, defending the student.

The Biden administration has weighed in in favor of the school arguing that there is some speech, that "intentionally targets specific school functions" that warrant discipline even if it occurs off campus.