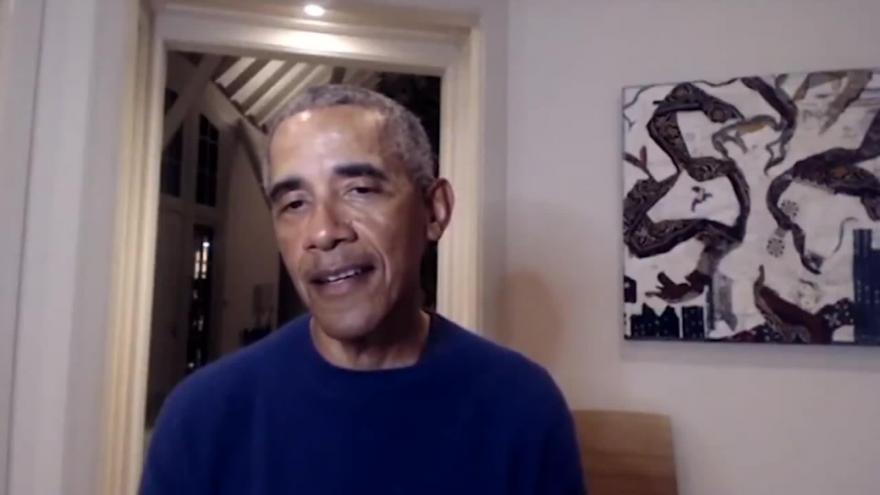 "Let me start by the way, by just stating that we're in the midst of a big political fight. And we take that very seriously," Obama said during a virtual fundraiser with Democratic vice presidential nominee Kamala Harris for the Biden-Harris campaign.

"We also want to extend our best wishes to the President of the United States, the first lady ... Michelle and I are hopeful that they and others who have been affected by Covid-19 around the country are getting the care that they need, that they are going to be on the path to a speedy recovery," Obama said.

Obama's well wishes came following the White House's announcement Friday afternoon that Trump will be hospitalized at Walter Reed National Military Medical Center and remain there for "the next few days."

Biden, who tested negative for the virus Friday after participating in the first presidential debate with Trump three days prior, also said that Trump's positive test for coronavirus is a "bracing reminder" of the seriousness of the pandemic.

Biden's campaign is also pulling its negative ads Friday, going with all-positive messages after Trump's test, a campaign aide said. The aide said the decision to pull negative ads was made before the White House announced Friday evening that Trump was going to Walter Reed medical center for several days.

Obama has been critical of the President's handling of the coronavirus since early in the pandemic. In May, Obama delivered a blistering critique of the Trump administration's response to the coronavirus crisis, describing it as "an absolute chaotic disaster" during a private call with people who worked for him in the White House and across his administration.

"It's part of the reason why the response to this global crisis has been so anemic and spotty," Obama said at the time. "It would have been bad even with the best of governments. It has been an absolute chaotic disaster when that mindset -- of 'what's in it for me' and 'to heck with everybody else' -- when that mindset is operationalized in our government."

"Doing what feels good, what's convenient, what's easy -- that's how little kids think. Unfortunately, a lot of so-called grown-ups, including some with fancy titles and important jobs, still think that way -- which is why things are so screwed up," Obama said.

The implicit rebuke of the President came during a week when Trump marshaled an intensive PR campaign from the White House to improve Americans' perceptions of his pandemic response.