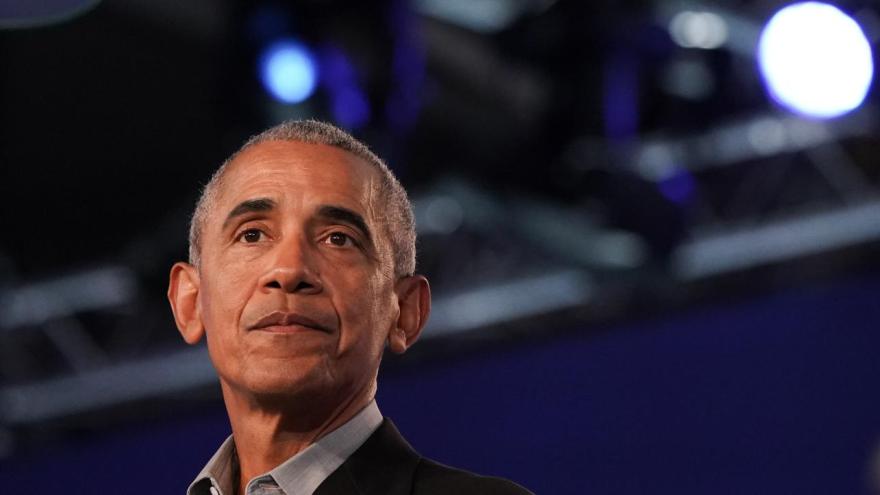 Former President Barack Obama, seen here in Glasgow, Scotland, in November 2021, is ramping up his engagement with the 2022 midterms.

(CNN) -- Former President Barack Obama used his remarks at a fundraiser Thursday night for Senate Democrats' campaign arm to warn that "a little bit of malevolence" aimed at attacking democracy "can go a long way."

The comments -- made at a fundraiser for the Democratic Senatorial Campaign Committee in New York City where the top ticket cost $50,000 -- come as the former President ramps up his engagement with the 2022 midterms, which will determine control of Congress and key election posts ahead of the 2024 presidential contest.

Obama, according to excerpts provided to CNN by a committee aide, told the audience in New York that "one of the things we learned over the last six years is that democracy is not self-executing" and that a little malice does a lot in "dismantling norms, habits, institutions that are the glue to become a big, diverse, multiracial, multicultural democracy on premise in place."

CNN reported earlier this week that Obama plans to campaign for a variety of candidates ahead of the November elections, including those in down-ballot races such as secretary of state. It is uncommon for a former President to campaign for down-ballot candidates, but Obama's foray into secretary of state contests signals how some Democrats view the office as critical, given that the winners this year will control key election infrastructure during the 2024 presidential race.

Some Democrats are already sounding the alarm that the party is not focused enough on secretary of state races, following the chaos spurred by former President Donald Trump's false claims of fraud that followed the 2020 presidential election and the number of Trump-backed election deniers who are on the ballot for secretary of state in key states across the country.

"There has been improvement. Do I think it is enough? No," Ellen Kurz, founder of iVote, a Democratic outside group that backs secretary of state candidates, said of the party's efforts in prioritizing these contests.

During his remarks Thursday, Obama lauded the fact that Democrats are "putting a bunch of resources into a ground game, door-knocking, direct voter contact, because the way you cut through all the noise right now and the confusion that's fostered through social media is being on the ground, personal relationships, having conversations with people you trust."

"That's where it's going to make a difference," he added.

This was Obama's second fundraiser in as many weeks. The former President also spoke at a National Democratic Redistricting Committee fundraiser on Martha's Vineyard, Massachusetts, in late August.

Obama also derided Republicans at the Thursday fundraiser, saying the party "systematically" seeks to boost certain "political minorities," allowing it to "get more power and more seats and to do whatever it takes to hang on to power."