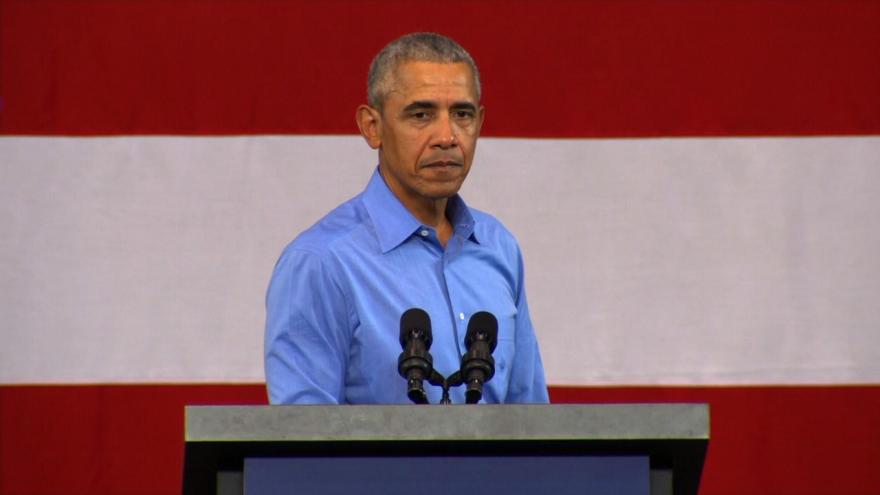 (CNN) -- Former President Barack Obama on Monday released a pointed statement condemning "language coming out of the mouths of any of our leaders" that "normalizes racist sentiments." The statement, which did not directly name President Donald Trump, follows two mass shootings in the US in the span of 13 hours -- one of which involved a white supremacist suspect.

"We should soundly reject language coming out of the mouths of any of our leaders that feeds a climate of fear and hatred or normalizes racist sentiments; leaders who demonize those who don't look like us, or suggest that other people, including immigrants, threaten our way of life, or refer to other people as sub-human, or imply that America belongs to just one certain type of people," Obama said.

"It's time for the overwhelming majority of Americans of goodwill, of every race and faith and political party, to say as much -- clearly and unequivocally," he added.

Obama's statement on Monday marked one of his most forceful condemnations of Trump's rhetoric since leaving office. While he did not name Trump, as is his custom, Obama has occasionally criticized the President -- such as when he ended the Obama-era Deferred Action for Childhood Arrivals, or DACA, program and in the wake of Trump's first travel ban executive order -- but it is rare for modern presidents to criticize their successors.

Even amid recent uproars over Trump's racist comments about four Democratic congresswoman and the city of Baltimore, Obama has largely remained silent. But mass shootings are an issue that Obama has long been frustrated by, including multiple massacres during his time in office. He's said the day of the Sandy Hook shooting was the worst of his presidency, and lamented Washington's collective inability to respond meaningfully.

Trump appeared to refer to Obama's statement on Tuesday morning, quote-tweeting a Fox News segment to suggest a double standard in his treatment.

"'Did George Bush ever condemn President Obama after Sandy Hook. President Obama had 32 mass shootings during his reign. Not many people said Obama is out of Control. Mass shootings were happening before the President even thought about running for Pres.' @kilmeade @foxandfriends," Trump tweeted.

A 21-year-old white supremacist is in custody in the Texas domestic terrorism case. The shooter in Ohio was killed by police and a motive is not yet known in that case.

In his statement, Obama added, "We are not helpless here. And until all of us stand up and insist on holding public officials accountable for changing our gun laws, these tragedies will keep happening."

Trump, in a tweet on Monday, suggested tying immigration legislation to strengthening background checks even as the alleged shooter in El Paso, Texas, is believed to have authored a racist, anti-immigrant document targeting Hispanics.

Trump did not indicate in his tweets on Monday morning if he supported a sweeping gun control bill that passed the House with bipartisan support in February that requires universal background checks but has not been considered by the Senate.

In a televised address later Monday, Trump called on the nation to "condemn racism, bigotry and white supremacy" but stopped short of acknowledging his own divisive and racist rhetoric. He did not mention background check legislation or tie any gun action to immigration.

Texas natives and Democratic presidential candidates Beto O'Rourke and Julián Castro both thanked Obama for his statement on Twitter Monday.

As President, Obama took executive actions on gun control, including an expansion of background checks.

"At least let's figure it out. Let's try some things," he said of the issue at a CNN town hall in 2016. "All of us can agree that it makes sense to do everything we can to keep guns out of the hands of people who would do others harm, or themselves harm."