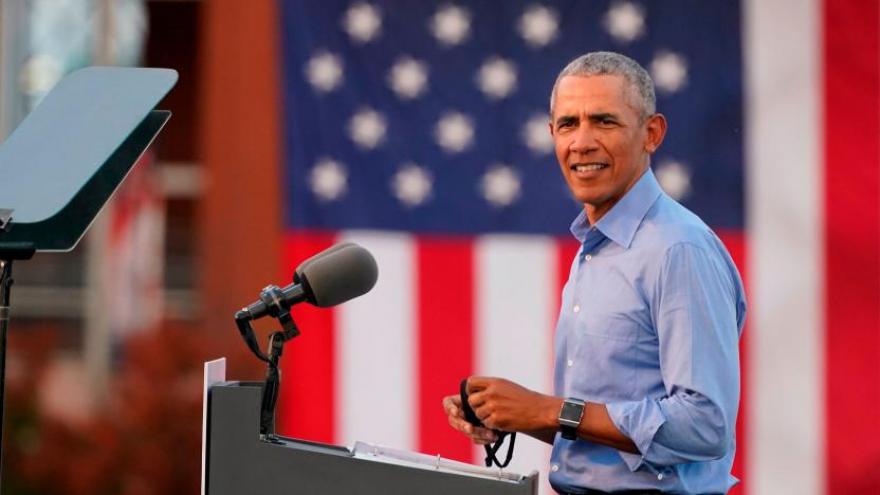 The event is Obama's first stump speech for his former vice president, a welcome sight to Democrats who see the former president as Joe Biden's most potent character witness and a key factor in encouraging Black men, Latinos and younger voters to turn out and vote.

(CNN) -- Former President Barack Obama delivered a blistering account of his successor's first four years in office on Wednesday in Philadelphia, arguing that President Donald Trump has proved he is "incapable of taking the job seriously" and has shown no interest in "helping anybody but himself and his friends."

The event is Obama's first stump speech for his former vice president, a welcome sight to Democrats who see the former president as Joe Biden's most potent character witness and a key factor in encouraging Black men, Latinos and younger voters to turn out and vote.

Obama's speech represented his most direct attacks on Trump to date, with the former Democratic leader leveling both substantive critiques -- like questioning Trump's tax policy and handling of the coronavirus pandemic -- and personal barbs, jabbing at shrinking ratings for the President's speeches and town halls.

The remarks drilled down on years of Democratic concerns about the President, with Obama arguing Trump's presidency has not only changed the way other countries view the United States but remade the way Americans feel about politics.

"I never thought Donald Trump would embrace my vision or continue my polices, but I did hope for the sake of the country, that he might show some interest in taking the job seriously," Obama said. "But it hasn't happened. He hasn't showed any interest in doing the work or helping anybody but himself and his friends."

The former President directly attacked Trump's handling of the coronavirus, the issue that is dominating the 2020 campaign.

He noted that Trump recently said that there is "not much" he would change about the US response to the pandemic that has killed over 220,000 people in the United States.

"Really?" Obama asked. "Not much? Nothing you can think of that could have helped some people keep their loved ones alive?"

Standing in front of Lincoln Financial Field for the drive-in rally, Obama said a competent response to the coronavirus would have meant Philadelphia Eagles fans "would be tailgating here at The Link, instead of watching a speech from your cars."

Obama's remarks will undoubtedly anger Trump, who has continued to attack his predecessor even after almost four years removed from his last day in office.

After Obama suggested Trump uses the presidency to boost his own profile, he added, "Even then, his TV ratings are down. So you know that upsets him."

And when he noted that Trump inherited a booming economy from him, Obama added, but "just like everything else he inherited, he messed it up."

The speech also showed Obama is closely watching the day-to-day news about Trump, including a Monday report that the President maintains a Chinese bank account.

"How is that possible? A secret Chinese bank account," Obama asked.

Then he reflected on the way that conservative media and Trump treated him during his time in office.

"Listen, can you imagine if I had had a secret Chinese bank account when I was running for reelection?" Obama asked. "You think Fox News might have been a little concerned about that? They would have called me Beijing Barry."

Obama also touted Biden and his running mate, California Sen. Kamala Harris, throughout the speech, saying that while he didn't know Biden well when they both served in the Senate, he "came to admire Joe as a man who has learned early on to treat everyone that he meets with dignity and respect."

Obama said Biden would "never call the men and women of our military suckers and losers," citing a bombshell report on Trump from The Atlantic. He said Trump has "emboldened" racists. Obama also incredulously recounted instances of Trump retweeting conspiracy theories, indirectly mentioning the false QAnon claim that says there is a "secret cabal running the world."

"It just won't be so exhausting," Obama said of a Biden administration, adding voters are "not going to have to think about the crazy things ... and that is worth a lot."

Back in the game

Obama, after largely sitting out the Democratic primary, has steadily ramped up his anti-Trump rhetoric, after years of trying to hue to a longstanding tradition that former presidents avoid attacking their successors. Trump, however, changed that calculation and Obama has ramped up his critiques of the President.

"Former presidents tend not to delve too deeply into politics and certainly not the politics of their successors," David Axelrod, a longtime adviser to Obama, said in an interview. "I think that was his plan, but Trump changed that plan."

Obama started his day on the campaign trail with a round table meeting at the Hank Gathers Youth Access Center in North Philadelphia, where he urged voters -- particularly the Black men in attendance -- to vote this year not because it will dramatically and immediately change their lives, but because it will take the country in the right direction.

Obama, who ran a dozen years ago with a focus on "Hope and Change," said that while he remains hopeful about the future of the United States, the country "can't afford another four years" under Trump.

"With my election, I think we had probably gotten over-optimistic about how much change had happened in the country. But that change was real," Obama said. "There was some pushback. And that was real, too."

Obama then added: "We can't afford another four years of this, because what happens is you do get to a point where you go so far backward that it becomes really hard to dig yourself out of that hole."

Obama did not mention Trump by name during the roundtable, but he did offer a blistering critique of his successors handling of the coronavirus.

"The pandemic would've been tough for any president," Obama said. "But the degree of incompetence and misinformation, the number of people who might not had died had we just done the basics, the degree to which it has impacted low income communities so disproportionally, that's something that I'm not just confident that it can be fixed, there's proof."

Obama then stepped out of the community center and returned to his roots as a community organizer, the job that launched his political career, when he grabbed a bullhorn to give Democratic organizers a pep talk.

"Folks, seeing your effort out there is going to be inspiring. Don't be discouraged," Obama said through the bullhorn. "You will get some folks who say I am not going to vote, you will get some folks who will be distracted ... but for this community to see all of you making this effort, that is the kind of spirit that is ultimately going to make a difference in this election."