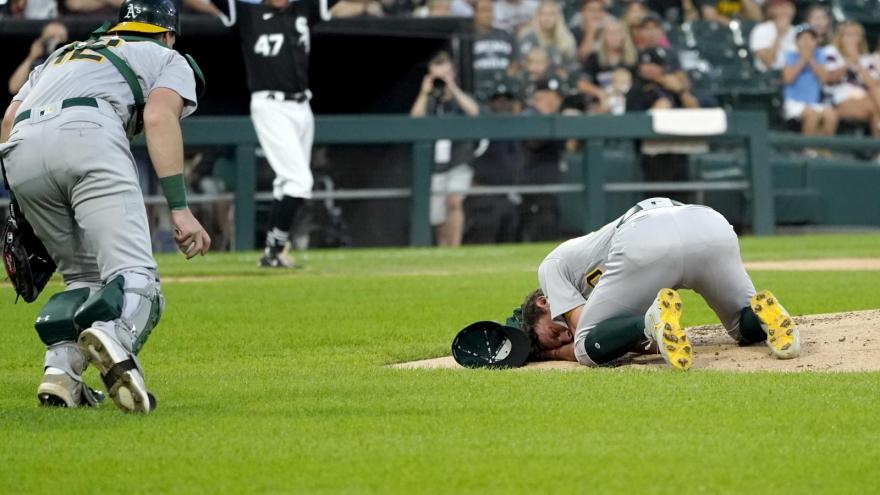 Oakland Athletics pitcher Chris Bassitt, right, holds his face after a line drive hit him in Chicago on Tuesday.

(CNN) -- A line drive struck Oakland Athletics starting pitcher Chris Bassitt in the face Tuesday in Chicago, dropping him to his knees for several minutes before he was carted off the field on his way to a hospital.

White Sox outfielder Brian Goodwin hit a pitch right back at Bassitt in the second inning with an exit velocity of 100.1 mph, MLB.com reported. The ball smacked Bassitt, less than 90 feet away, in the right side of his face.

A's catcher Sean Murphy rushed to the mound and waved for help as Bassitt, doubled over on the ground, covered his own face, video on MLB.com shows.

Bassitt, 32, remained there for minutes before training staff helped him up and onto a cart, which drove him off the field as he held a towel to his face.

Bassitt, an All-Star with a 12-4 record this year, was taken to a hospital.

He was conscious "the entire time," A's manager Bob Melvin told reporters after the game, a 9-0 White Sox victory.

"They had to do some stitches. He's in a scan, and we'll know more about potential fractures or whatever tomorrow," Melvin said.

The A's also said on Twitter that Bassitt was "conscious and aware" on the way to the hospital, and that the team would provide additional information when possible.

Teammates looked on, stunned, some with hands over their mouths, as trainers tended to Bassitt on the mound.

Afterward, players tweeted their support. That included Goodwin, who followed his team's own tweet of concern with: "Most definitely, Chris, you are in my prayers for sure brother."

"Over the years, I've seen it, against us and for us. I'm trying to think if there's anything scarier than that," White Sox manager Tony La Russa said, according to MLB.com. "A guy gets hit in the head at the plate, but he sees it a little bit. This was so defenseless. So he's the No. 1 concern. I just heard that he's conscious, getting examined. Certainly hope that he caught a break and he's OK."