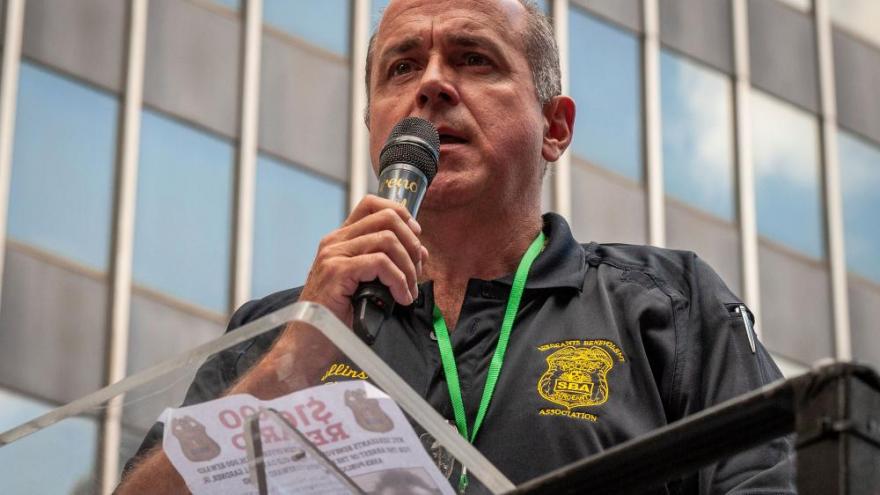 The FBI on Tuesday raided the headquarters of the New York Police Department's second largest union and the home of the union's outspoken president, multiple people confirmed to CNN. A source confirmed the FBI also raided an address in Port Washington, New York. According to public records, the home belongs to SBA President Edward Mullins.

(CNN) -- The president of the New York Police Department's second-largest union resigned Tuesday night after the FBI searched his home and the union's headquarters earlier in the day, according to a letter obtained by CNN from multiple sources.

The executive board of the Sergeants Benevolent Association asked Ed Mullins to resign as president in the wake of the searches, citing the "severity of this matter and the uncertainty of its outcome," according to the letter, which was sent to union members from the board.

"The nature and scope of this criminal investigation has yet to be determined," the letter said. "However it is clear that President Mullins is apparently the target of the federal investigation. We have no reason to believe that any other member of the SBA is involved or targeted in this matter."

The letter pointed out that Mullins is entitled to the presumption of innocence as the investigation is carried out, but "the day to day functioning and the important business of the SBA cannot be distracted by the existence of this investigation," the letter said.

"All I have been told is the FBI has raided the SBA HQ and it's in connection with an ongoing investigation, but we don't have further details on that at this moment," de Blasio said.

A source confirmed the FBI also raided an address in Port Washington, New York. According to public records, the home belongs to Mullins.

Andrew Quinn, an attorney representing the SBA, had no comment when contacted by CNN.

An FBI spokesperson said the FBI "is conducting a law enforcement action in connection with an ongoing investigation" but would not comment further.

A spokesman for the US Attorney's Office in Manhattan declined to comment.

"We neither participated nor knew about his home being raided," Del Muro said.

CNN has reached out to the FBI for comment on Chief's Del Muro's statement on not being notified of the raid.