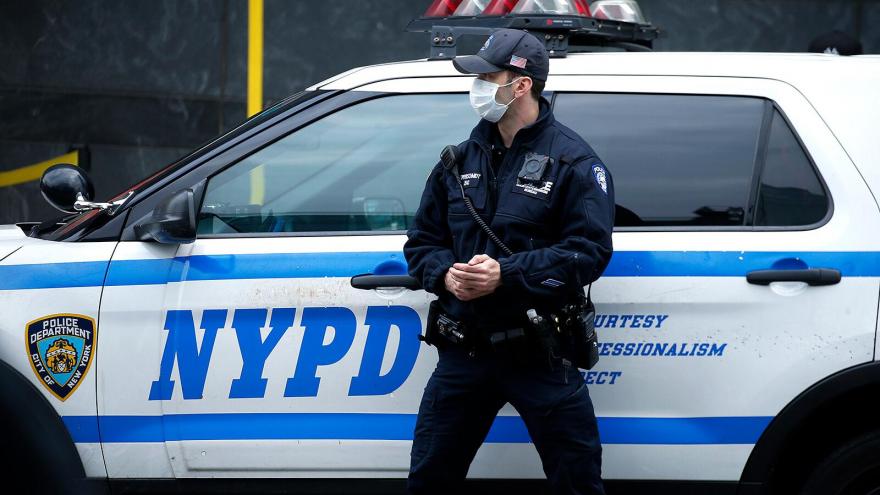 An NYPD officer stands near his patrol car amid the coronavirus pandemic on April 5, 2020 in New York City. Officers were told to prepare for protests following the 2020 election.

(CNN) -- The commissioner of the New York Police Department told all uniformed members to prepare to be deployed for protests before and after next month's presidential election, according to an internal memo obtained by CNN.

The deployment of officers of every rank could start October 25, the memo said, citing the possibility of protests before and after Election Day. Deputy inspectors and captains may be sent to command forces in the field, Commissioner Dermot Shea said.

Shea called the November 3 election "one of the most highly contested presidential elections in the modern era," noting that a winner may not be decided for several weeks.

"Accordingly, we should anticipate and prepare for protests growing in size, frequency, and intensity leading up to the election and likely into the year 2021."

The department has been training for election unrest as federal law enforcement agencies have held discussions in recent months with sheriffs and local police charged with keeping order in the event of disputed results.

"The whole idea behind the training is to separate those people that are there to cause chaos, as opposed to the real reason that the protests began in the first place," said Deputy Chief Samuel Wright, who is leading the initiative.

Among the concerns are armed extremists who may try to stop or interfere with vote-counting.

Groups ranging from right wing activists and white supremacists to antifa and anarchists have been active during the months of protests that followed the death of George Floyd at the hands of Minneapolis police in late May.

For the first time in decades, every uniformed officer in New York will take a two-day course focusing on tactical measures as well as the psychology behind protests. The training began in July, shortly after the department responded to massive demonstrations after Floyd was killed.

Protest participants have criticized the New York Police Department's handling of the demonstrations.

A preliminary report by New York Attorney General Letitia James on the handling of protests over the summer said 2,000 arrests were made. The July report also included a review of social media video that showed an NYPD vehicle accelerating through a crowd of protesters.

NYPD officials said they have used lessons from some interactions over the summer months to improve training.