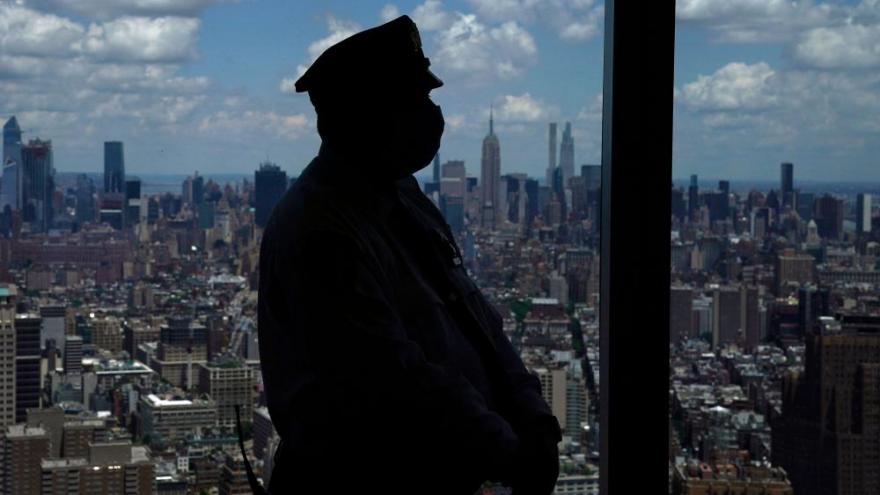 The NYPD issued a directive on December 20 mandating that all employees wear a mask while on the job, "regardless of vaccination status," according to an internal memo obtained by CNN.

(CNN) -- The New York Police Department has seen an increase in the number of officers calling out sick, including fully vaccinated officers, according to numbers shared with CNN by a senior NYPD official, as the Covid-19 Omicron variant has sent virus infection rates soaring across New York City and the state.

The uptick in Covid cases among officers comes as the department issued a directive on Monday mandating that all employees wear a mask while on the job, "regardless of vaccination status," according to an internal memo obtained by CNN.

"What happens to New Yorkers happens to us as well, and we're definitely seeing it hit us hard." NYPD Commissioner Dermot Shea said on WPIX Wednesday morning. "The good news is we are not seeing a dramatic increase in hospitalizations within our employees, it remains essentially where it was."

Shea said that the mask directive issued on Monday is a "reaffirmation of existing policy more than anything else."

Meanwhile, the FDNY has seen a slight uptick in the numbers of members who are on leave, with 10% of firefighters and 16% of EMS on leave, FDNY spokesman Frank Dwyer.

At the height of Covid, about 22% of NYPD's work force was out sick. The department has lost 63 employees to the virus.

Since March 12, 2020, 13,398 uniformed and civilian NYPD employees have contracted Covid-19, the official said, adding that 754 members, or 1.7%, have tested positive after being full vaccinated.

As of Tuesday, the NYPD had about 52,300 employees, including roughly 34,700 uniformed officers, NYPD officials said.

For now, the NYPD follows city and national guidelines and considers fully vaccinated employees those who have received two vaccine shots, the official said, but added that the department is "currently considering mandating" the booster shot for all department employees.

Some of the department employees who are out sick have received all three shots, the official said. The number of those employees was not immediately clear.

Currently, 88% of the NYPD's employees have been vaccinated with at least two shots, NYPD spokesman Sgt. Edward Riley said.

The NYPD did not respond for comment on the increase in Covid numbers or the mask guidelines.

The mask directive, which was issued Monday to all employees, requires officers wear masks that cover their face and nose while working indoors in shared work spaces or interacting with the public and brings the NYPD face cover policy similar to what it was during the height of Covid. The only exception is for eating and drinking, according to the memo.

The memo does not make clear what, if any, discipline department employees will face for not following the new mask guidelines.

"No one's getting into trouble for not wearing one," the official said, adding, "but we're all doing it."

CORRECTION: An earlier version of this story misstated the day-over-day increase in sick officers. The figure increased by 13 percent between Monday and Tuesday.