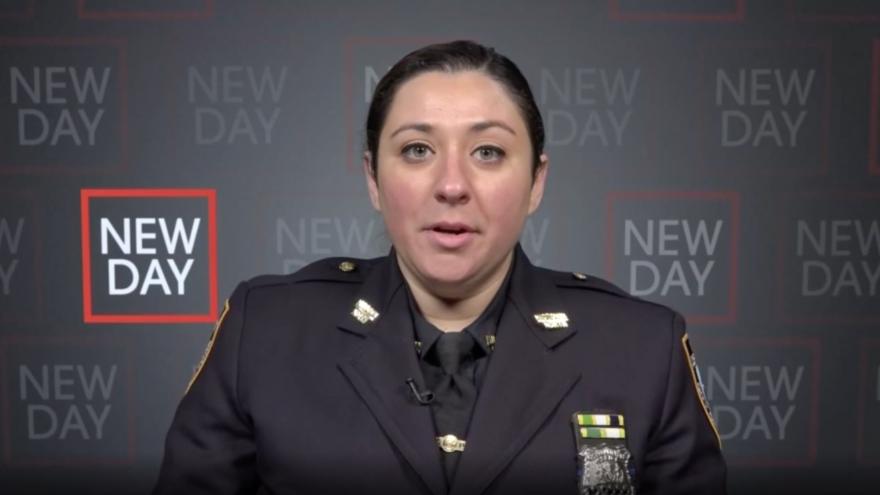 (CNN) -- A New York police officer sprang into action when a shooting erupted in Times Square over the weekend, wounding two women and a 4-year-old girl.

NYPD Officer Alyssa Vogel -- a new mother herself -- was filmed bolting through the busy tourist thoroughfare on Saturday with the injured child in her arms. The girl had been shot in the leg, and Vogel was moving as fast as she could to get the child to an ambulance.

In a Monday appearance on CNN's "New Day," Vogel said she heard reports of shots fired on 45th Street and Broadway and found two of her colleagues treating two women who'd been shot. They told Vogel a "baby up the block" had been shot, too.

Vogel told CNN's Brianna Keilar that she and her partner took off running.

Another officer was attending to the girl when Vogel arrived, but he needed a tourniquet to stabilize her leg wound, she said. Vogel had one on her gun belt, so she tied and tightened it around the girl's leg. After confirming the girl didn't have any other gunshot wounds, Vogel rushed away with the girl in her arms.

"I just picked her up and started running to the ambulance because I wanted to get her to the hospital as soon as possible," Vogel said.

The girl's mother, who Vogel said was panicking, ran after the officer and joined her in the ambulance.

"I was just trying to calm her down, trying to get her to breathe with me," she said.

Vogel said she promised the girl's mother that her 4-year-old would be OK. (Vogel said she'd been told that the girl had surgery and is now in stable condition.) "I just wanted to reassure her that we were doing everything we could at that time to get her daughter to help," she said.

"Whether they're rushing toward the danger to help save a little girl or rushing home to family after their tour this #MothersDay -- the dedication of NY's Finest knows no bounds," he said.

All three of the shooting victims are in stable condition, according to New York Mayor Bill de Blasio. The women, a 23-year-old tourist from Rhode Island and a 43-year-old from New Jersey, and the girl, who lives in Brooklyn, are all thought to be innocent bystanders.

The NYPD is still working to identify the people involved in the shooting. The department posted a video and a photo to Twitter of at least one person wanted in connection with the shooting.