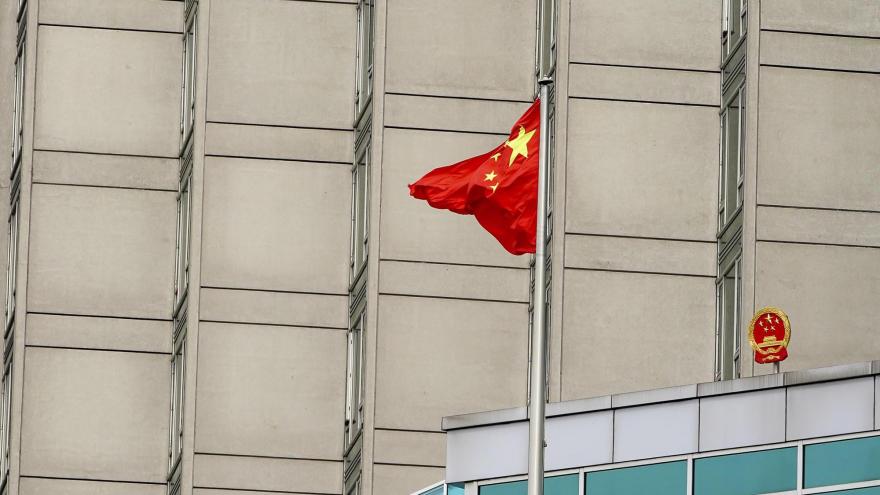 The Chinese flag flies at the country's consulate in New York on July 30, 2020.

(CNN) -- A New York police officer who rose through the ranks of the department is accused of using his position in the department's community affairs unit to give Chinese officials access to NYPD officials and offered insider information about its operations, according to a criminal complaint.

The officer, Baimadajie Angwang, 33, was arrested Monday, according to the US Attorney's office for the Eastern District of New York. Federal prosecutors in Brooklyn charged him with acting as a foreign agent without notifying American authorities, wire fraud and making false statements, according to a complaint. They also charged him with obstruction of an official proceeding -- prosecutors claim he lied on a national security clearance form that granted him a "secret" security clearance.

CNN has reached out to an attorney for Angwang for comment on the charges. He had his first court appearance Monday.

Angwang, who joined the department in 2016, is part of the NYPD's community affairs unit based in Queens. He is currently suspended; the NYPD did not respond when asked whether he is suspended with pay.

Angwang is a former Marine who served in Afghanistan in 2013, according to his service record. Since 2014, he has served as a US Army Reservist, where he is a staff sergeant working as a civil affairs specialist. According to the criminal complaint, his duties with the Army Reserve include "advising the command on the tactical and operational deployment" of civil affairs teams, and he holds a "secret" level security clearance.

Prosecutors say in the complaint that an investigation revealed Angwang allegedly acted at the direction and control of Chinese officials to report on activities of ethnic Tibetans in the New York City area to the consulate, and helped spot and assess potential Tibetan intelligence sources.

Prosecutors allege that since 2018, Angwang has maintained a relationship with at least two Chinese officials stationed at the consulate in New York. He allegedly received tasks from and reported back to them, even referring to one of the officials repeatedly as "Boss."

A naturalized US citizen, Angwang came to the United States from China on a cultural exchange visa, overstayed his second visa and eventually applied for asylum in the United States, claiming he was "arrested and tortured" in the People's Republic of China due in part to his Tibetan ethnicity, according to the complaint.

"Let them know you have recruited one in the police department," Angwang allegedly told a Chinese consulate official in a November 2018 call, according to the complaint.

The Chinese consulate in New York issued a statement Tuesday, describing its work as "above board and beyond reproach."

"The staffs of the Chinese Consulate General in New York have always been fulfilling duties in accordance with international law and the law of the United States," the statement said. "They have been conducting normal exchanges with various sectors of society in its consular district, and have been committed to promoting friendly communication and exchanges between the Chinese people and the people from all works of life in its consular district."

Angwang remained in federal custody Monday, after his attorney John Carman said at his initial appearance he would consent to an order of detention, but may consider applying for bail.

Assistant Attorney General for National Security John Demers said in a statement that Angwang's arrest was a warning to state and local officials that they are not immune to the threat of Chinese espionage.

"According to the allegations, the Chinese government recruited and directed a U.S. citizen and member of our nation's largest law enforcement department to further its intelligence gathering and repression of Chinese abroad," Demers said.

According to the complaint, after Angwang received a promotion, he allegedly told a Chinese consulate official that meant he could "provide NYPD information to the Consulate."

When the NYPD asked Angwang to take part in a TV interview for a media outlet that is critical of Chinese government, Angwang sought permission from a Chinese consulate official, who told him he "absolutely shouldn't do it," the complaint states.

NYPD Commissioner Dermot Shea, in a statement to CNN, said, "As alleged in this federal complaint, Baimadajie Angwang violated every oath he took in this country. One to the United States, another to the U.S. Army, and a third to this Police Department.

"From the earliest stages of this investigation, the NYPD's Intelligence and Internal Affairs bureaus worked closely with the FBI's Counterintelligence Division to make sure this individual would be brought to justice."

When filling out forms as part of his US Army Reserve service, Angwang allegedly gave false answers to questions, including one that asked whether he or any member of his immediate family had contact with a foreign government, its establishment or representatives. He answered "no" to that question in 2019.

CNN has reached out to the US Army Reserve for comment.

The wire fraud charge stems from allegations that Angwang and his wife have received "multiple substantial wire transfers from" a bank account in China in his brother's name, and from an individual from an account at the Bank of China in New York, totaling about $120,000.