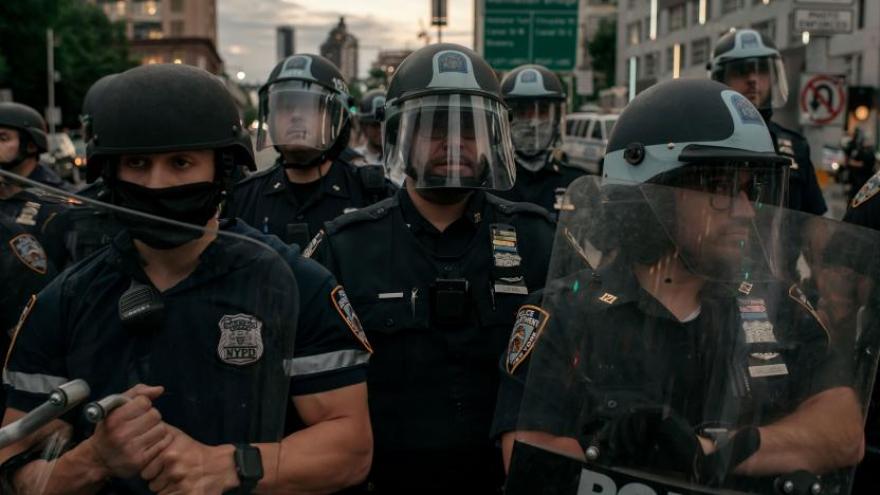 (CNN) -- New York Police Department officials did not anticipate the large number of protesters or violence that came at them during the George Floyd demonstrations and that, combined with insufficient staffing and lack of training, led to poor judgment and excessive force, according to a report released Friday.

The city Department of Investigation, appointed by Mayor Bill de Blasio to analyze the NYPD's response into the Floyd demonstrations in late May and into much of June, released their 115-page report on Friday.

And while the report acknowledges that emotions among protesters ran high and spilled over into abuse and violence against police officers, the report also says NYPD officers engaged in actions that were unprofessional or excessive.

"The Department itself made a number of key errors or omissions that likely escalated tensions, and certainly contributed to both the perception and the reality that the Department was suppressing rather than facilitating lawful First Amendment assembly and expression," DOI Commissioner Margaret Garnett said in the report.

The report listed 20 recommendations, including the creation of a protest response unit and a patrol guide policy for protests, that NYPD Commissioner Dermot Shea said he would include.

The report called for NYPD officers in riot gear to be off to the side and only used when needed, additional training and policies, daily roll call messages about the constitutional rights of protesters, and a stronger role for community affairs officers and the bureau as a whole.

"In general terms the report captured the difficult period that took place in May/June of 2020 and presents 20 logical and thoughtful recommendations that I intend to incorporate into our future policy and training," Shea said in a statement.

Mayor Bill de Blasio said he fully supported the report's conclusions and recommendations and that accountability "starts with me and the commissioner."

"We needed an objective ... look at what happened in May and June," the mayor said. "We needed to understand what went right, what went wrong, what needs to be different, what needs to be better. I certainly take full responsibility for the issues that are raised in the report and the changes that we have to make."

The Legal Aid Society and the New York Civil Liberties Union issued a joint statement saying the report, "confirms that the shocking violence the NYPD employed during the George Floyd protests was directly traceable to the leadership failures of Mayor de Blasio, Police Commissioner Shea and other police leaders who created a de facto policy permitting and encouraging individual officers to target protesters for brutal treatment and unlawful arrests."

New York City Police Benevolent Association President Patrick J. Lynch said the report "confirms what police officers knew on the first night of riots: our city leaders sent us out with no plan, no strategy and no support to deal with unrest that was fundamentally different from any of the thousands of demonstrations that police officers successfully protect every single year."

Following Floyd's death at the hands of a police officer in Minneapolis, several demonstrations happened in New York City, and while some were peaceful others were marred with violent confrontations with police and allegations that police had used excessive force to control crowds.

The department's response put them under the microscope, with countless elected officials and agencies charging that they could have done better.

DOI conducted its investigation into the protests from May 28 to June 20.

From those arrests, 166 were felonies, 1,002 were misdemeanors, and 851 were violation arrests, the report said.

Also, the Civilian Complaint Review Board, one of the agencies charged with oversight of the NYPD, received 1,646 protest-related allegations associated with 248 incidents occurring between May 28 and June 20, according to the report. A large number of those complaints were allegations of force, which were 1,052, the report said. The rest were abuse of authority, 368, discourtesy, 185, and offensive language, 41.

The NYPD didn't implement a proper strategy to handle the protests, first by not deploying enough officers and later on by using "disorder control tactics" which led to confrontations instead of de-escalation, the report says.

Certain crowd control tactics, like surrounding protesters and using pepper spray, were excessive and led to more tension, the report charged. Also, the NYPD's implementation of a curfew was inconsistent and led officers to arrest lawful and unlawful protesters, adding to the perception they were using excessive force.

The NYPD's use of intelligence, lack of training, no centralized community affairs strategy and a lack of a data collection system to track protest data all contributed to issues during the response to the demonstrations, the report found.

The report also makes suggestions for oversight, including merging all NYPD oversight groups into one agency with an independent board and having one high ranking member of the department charged with releasing records.

"While NYPD leadership may believe in good faith that they can effectively monitor themselves, we urge them to accept that in this moment their own efforts are not enough to restore and preserve trust with the public, and to seek a true partnership with robust civilian oversight," Garnett wrote.

In a press briefing on Friday, Garnett was asked about her interviews with NYPD leadership, specifically regarding those who said the department did what they could and there's nothing they would have changed about the response other than staffing levels at the onset.

'It's a pretty wide gap between, I think, the general public perception among New Yorkers about how the department's response went," Garnet said.

"I don't know what to make of that," Garnett later added. "I hope that the department is more self-critical and self-reflective."

"We're definitely going to look at actions of the individual commanders down to the precinct level, but I think it's fair to say that what's being pointed out here is not so much time for retribution, honestly, but time for change," de Blasio said.

The mayor said replacing leadership isn't out of the question but it's more about accepting change.