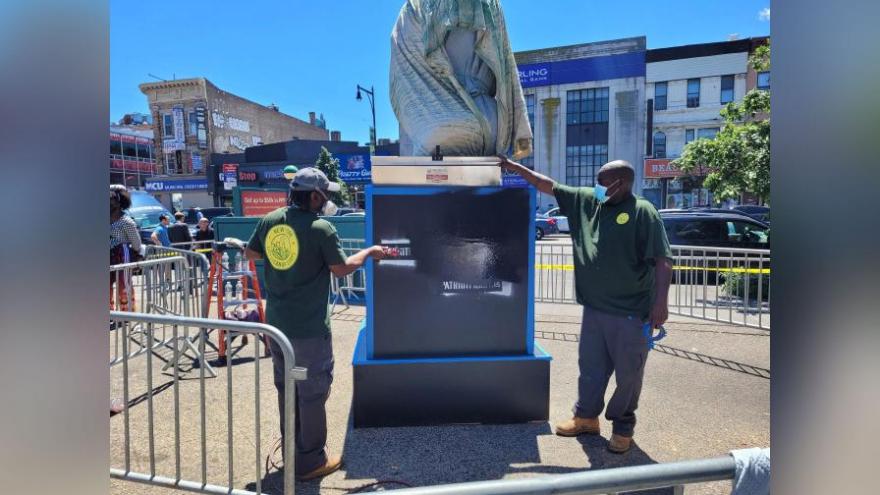 City workers were cleaning the statue in Brooklyn on Thursday.

(CNN) -- A statue of George Floyd that was unveiled in New York on Juneteenth by Floyd's brother was vandalized early Thursday morning and police are investigating the incident as a hate crime, a law enforcement official told CNN.

Black spray paint was daubed on the face of the statue and over the inscription on the base. The name of a website was stenciled with white spray paint on the pedestal, the New York Police Department said.

The site painted onto the pedestal supports Patriot Front, a "white nationalist hate group," according to the Southern Poverty Law Center.

The six-foot statue is on display on Flatbush Avenue in Brooklyn for several weeks before it is scheduled to move to Union Square in Manhattan in July.

The NYPD said it is checking on the whereabouts of four males in connection with the vandalism. The NYPD released a video and a photo of what it said was the four walking toward the vicinity of the statue before the incident.

The office of New York Mayor Bill de Blasio, in a tweet, described the vandalism as a "racist, loathsome, despicable act of hate."

Cuomo described the status as "a beacon for all who believe progress is possible, and in our ability to make it happen."

He added: "And to the group of neo-Nazis who did this, I want to be absolutely clear: get the hell out of our state."

The Newark statue was similarly found covered with black and white spray paint and vandalized with graffiti on Thursday morning, according to the Newark Police Department. The statue -- located in front of City Hall in Newark -- was also defaced with the tag "PATRIOTFRONT.US."

"This horrible act is the very reason that this statue needs to remain and be upheld," Newark Mayor Ras Baraka said in a statement. "As this is not just about George Floyd, it's a deliberate effort to push back against and ultimately dismantle systems of hatred, racism, and white supremacy."

"We are aware of a similar incident in Brooklyn, and are in communication with our federal, state, and county law enforcement partners, as well as the New York City police," O'Hara said.

The defacement of the statues in Newark and Brooklyn occurred just days before the sentencing of former Minneapolis police officer Derek Chauvin for his role in Floyd's death.