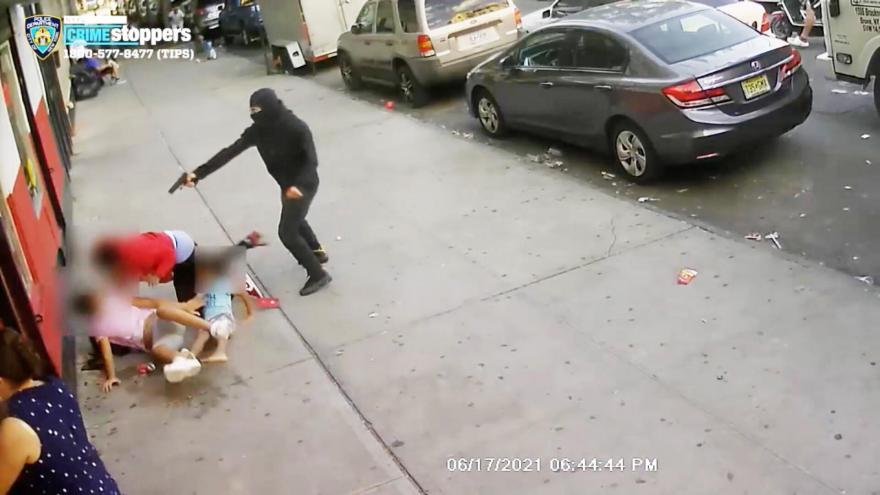 The New York Police Department arrested an alleged gang member in a June 17 shooting in the Bronx that put two children in the line of gunfire, Chief of Detectives James Essig said at a news conference Friday.

(CNN) -- The New York Police Department arrested an alleged gang member in a June 17 shooting in the Bronx that put two children in the line of gunfire, Chief of Detectives James Essig said at a news conference Friday.

Michael Lopez, 27, has ties to the "Make it Happen Boyz" gang and a long history of crimes involving guns and violence in New York City, Essig said.

With five prior arrests, Lopez is on parole until 2023 for a 2014 attempted murder charge. He has several open cases against him from 2020 alone.

He was arrested at his stepfather's residence in Harlem on Friday, Essig said.

Bronx County District Attorney Darcel Clark said Lopez was to be arraigned in court Friday on multiple charges, including attempted murder. If convicted, Lopez faces a maximum of 25 years in prison. The NYPD is still searching for another suspect who is seen riding a scooter in the video released by police.

CNN was unable to identify an attorney for Lopez Friday but reached out to The Legal Aid Society to see if an attorney there is representing him.

"More than 40 years ago during a Yankee game, the TV cameras focused on a building on fire not too far from Yankee Stadium and the announcer said, 'The Bronx is burning'," Clark said. "That footage defined the Bronx for years to come and we were seen as a place of destruction and arson."

"Now, we have this video of two innocent children running for their lives. The images of a 13-year-old girl shielding her 5-year-old brother from bullets fired by a gunman in broad daylight on a Thursday afternoon," Clark said. "That heart-wrenching video was seen around the world and now I fear that the catch-phrase is, 'The Bronx is bleeding.'"

Clark said she met with the children and their parents, who live in the Forest Houses housing project in the Bronx.

Clark said the children are getting assistance and seem to be very resilient.

The 24-year-old victim was taken to the hospital in stable condition. The children were not struck. An NYPD spokesperson told CNN Saturday the children are family members but are not related to the victim.

Note: CNN was told previously that one of the girls was 10.