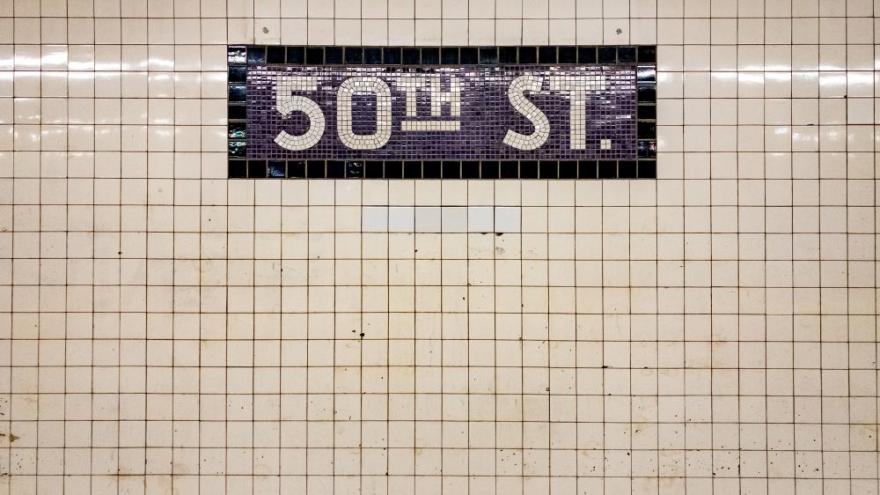 The blue and white titled mosaic signs normally read "50th St," but vinyl stickers were placed over the "50" transforming it to "RU."

Artists Adrian Wilson and Matt Duncan said they collaborated to produce and design the tribute for Ginsburg, the second woman appointed to the bench. She died Friday due to complications of metastatic pancreas cancer.

"You don't necessarily notice it since it's slightly changed," Wilson told CNN on Monday of the sign tribute.

The duo used adhesive vinyl that can be peeled off like a sticker to complete the project so that it wouldn't cause any permanent damage to subway, they said.

It took about five hours for them to be made, Wilson said, and the coloring was adjusted several times to blend in with the current color on the subway walls.

"It's not really vandalism. It's a memorial," Wilson said. "It's a fun and creative way for people to remember somebody."

Once the vinyl designs were complete, Duncan set out on the subway to covertly place them on top of the original signs. In total, seven signs were transformed to Ruth St.

Under one of the tributes sat a long empty bench, Duncan said. It was symbolic to see the bench and know she was gone. Some subway riders even sat on the bench to have their photo taken with the memorial.

The tribute went up Saturday night, and was gone by Sunday night, according to Wilson. But he said that was too be expected since the stickers were placed over the street signs.

It is unclear if they were removed by MTA or if someone else took them down. CNN reached out to MTA but they declined to comment.

Ginsburg, who embraced the nickname "The Notorious RBG" late in life, became a role model to generations because of her sharp wit, her legal knowledge and her fierce dissents.

Thousands have paid tribute to Ginsburg, memorializing her by doing everything from placing flowers at the Supreme Court steps to taking a moment of silence before a baseball game.