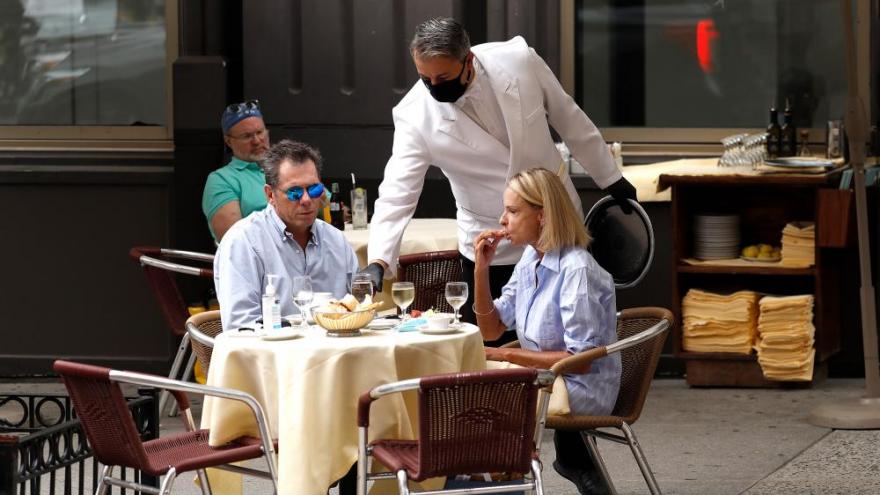 An outdoor restaurant in New York City in September 2020. Restaurants in the city will soon begin adding a coronavirus surcharge to customers' bills.

(CNN) -- New York City diners may soon see a Covid-19 surcharge on their bills as the restaurant industry continues to hobble due to the coronavirus pandemic.

The New York City Council passed a bill on Wednesday 46-2 that would allow restaurants to charge as much as 10% on customers dining indoors or outdoors to help cover Covid-19 expenses.

Labeled the "COVID-19 Recovery Charge," the surcharge does not add to the bill's overall tax, nor applies to delivery or takeout orders. A restaurant implementing the surcharge is free to use the new funds however it likes, though it must also make it clear that the surcharge is not a substitute for a tip or gratuity for waitstaff.

Republican City Councilman Joseph Borelli, the bill's prime sponsor, told CNN that the new option will help owners who don't want to go through the trouble of raising prices on their menus.

"New York was actually the only city that we knew of that actually had a ban, a 45-year-old law made when the Department of Consumer Affairs essentially reorganized, and it prevented restaurants, the only industry in New York City, from applying a surcharge," he explained.

"If you go to a hair salon, a gas station, or any other business in the city of New York, the owner is allowed to charge you a surcharge for basically whatever they want," Borelli said. "They obviously have to disclose it and you have to agree to pay it, but they're allowed to. It's only restaurants that are banned from this."

Once the bill is signed, restaurants would be able to tack on the surcharge up to 90 days after full indoor dining is restored and there is no longer a statewide disaster emergency declared for the virus.

Mayor Bill de Blasio is said to support the bill that passed Wednesday, though there are no details yet on when he will sign it.

A spokesperson for the mayor did not immediately respond to CNN's requests for comment.

"We will support the bill as long as there is a guarantee that restaurant workers will at least earn similar wages before the pandemic," said Anthony Advincula, spokesman for Restaurant Opportunities Centers United, a non-profit advocating for higher wages and better working conditions for restaurant workers.

Advincula further stressed that proper enforcement is necessary, and said he hopes that customers will realize the surcharge does not go directly to workers per se.

Restaurants could face a civil penalty between $50 and $350 for not adhering to the rules, according to the bill.

Earlier push for surcharge in 2018

Restaurateurs have pushed de Blasio for the option to add surcharges even before the pandemic.

In April 2018, more than 200 restaurants signed an open letter to de Blasio pleading that the city allow them to implement an optional surcharge, which is already allowed throughout New York State.

Borelli had also introduced a similar bill in 2018 that would allow up to a 5% surcharge, and says he hopes the optional surcharge remains after the pandemic eventually subsides.

Gov. Andrew Cuomo announced earlier this month that indoor dining can resume on September 30 with strict restrictions, including temperature checks, mandatory collection of contact information for contact tracing purposes, and a 25% capacity limit.

Nearly 64% of New York state restaurants could close, according to survey

Despite the city's embrace of outdoor dining, the industry is still in crisis.

According to a survey by the New York State Restaurant Association of 1,000 restaurants across the state, almost 64% of owners said they could close shop by the end of the year without additional financial relief.

For Philippe Massoud, CEO and executive chef of Flatiron District-based ilili, the optional surcharge would allow his business to not "die on the operating table."

"This is not a moneymaker for me, at least in our company's culture. We are using it to deflect costs that we otherwise would not have," he continued.

Though customers may still be too reluctant to eat indoors under the 25% capacity limit, Massoud said operating at 50% down the line would give the restaurant a "strong fighting chance."

"There is nothing more beautiful than to see life sprout out of the sidewalks of New York again. I think eating out at a restaurant creates a certain sense of normalcy and that everything will be OK," he said, emphasizing that restaurants can only stay in business if customers follow proper social distancing and mask-wearing protocols.