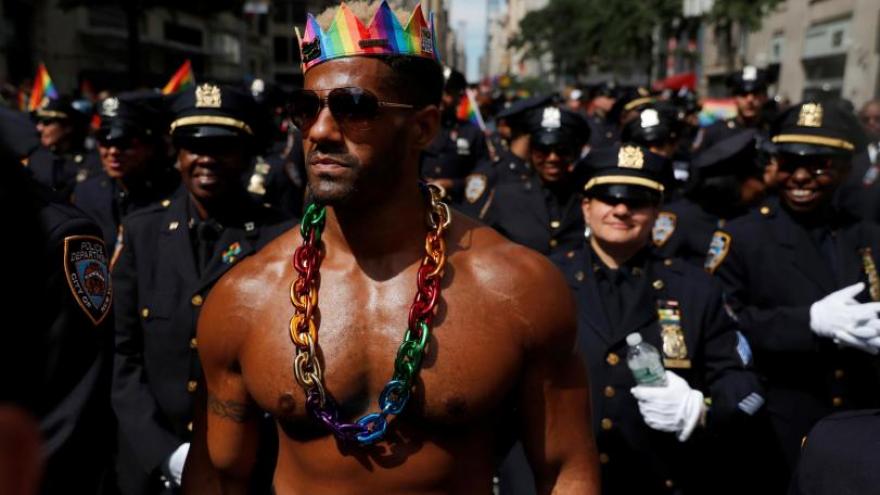 A man walks with NYPD officers as they take part in a 2019 pride parade in New York. Organizers have now banned the department from participating.

(CNN) -- Organizers of New York City Pride banned the New York Police Department from participating in the annual June parade and related events and moved to reduce their presence on scene, saying their appearance threatened members of the community.

"NYC Pride seeks to create safer spaces for the LGBTQIA+ and BIPOC communities at a time when violence against marginalized groups, specifically BIPOC and trans communities, has continued to escalate," Heritage of Pride, the nonprofit that plans NYC Pride events, said in a statement on Saturday.

"The sense of safety that law enforcement is meant to provide can instead be threatening, and at times dangerous, to those in our community who are most often targeted with excessive force and/or without reason. NYC Pride is unwilling to contribute in any way to creating an atmosphere of fear or harm for members of the community."

Heritage of Pride said they are banning all correction and law enforcement exhibitors at NYC Pride events until 2025, when their participation will be reviewed further.

Event organizers said they no longer require security and first response from the NYPD and will instead reallocate those services to "trained private security, community leaders, and volunteers," the statement reads. Heritage of Pride said it will use NYPD first response and security "only when absolutely necessary" and "as mandated by city officials," according to the statement.

Heritage of Pride spokesperson Dan Dimant told CNN on Saturday that the organization has worked with the NYPD for over 25 years.

"There's always been aggression by law enforcement and it's been an issue in the community for years," said Dimant. "The events of last year, with protests over George Floyd, there have been a lot of run-ins with the NYPD, so we began to think long and hard about this decision."

The announcement comes more than a month before the annual march, set for June 27 this year. The first Pride marches began as protests a year after the 1969 Stonewall riots, when the NYPD raided a gay bar in Manhattan's Greenwich Village at a time when police routinely harassed gay people and establishments.

Last year's Pride -- the 50th anniversary event -- was canceled and held virtually due to the Covid-19 pandemic. The theme for this year's event is "The Fight Continues."

While details of the event are still being discussed with event organizers and New York City officials, Dimant said they expect to have an in-person component as well as a virtual presentation.

A spokesperson for the NYPD said the move to ban the NYPD from the events was "disheartening."

"Our annual work to ensure a safe, enjoyable Pride season has been increasingly embraced by its participants. The idea of officers being excluded is disheartening and runs counter to our shared values of inclusion and tolerance," Detective Denise Moroney said in a statement. "That said, we'll still be there to ensure traffic safety and good order during this huge, complex event."

The Gay Officers Action League, or GOAL, an organization that represents LGBTQIA+ NYPD officers, said that the event organizers were taking "the low road."

"Heritage of Pride is well aware that the city would not allow a large scale event to occur without police presence. So their response to activist pressure is to take the low road by preventing their fellow community members from celebrating their identities and honoring the shared legacy of the Stonewall Riots," GOAL President Brian Downey said in a statement on Friday.