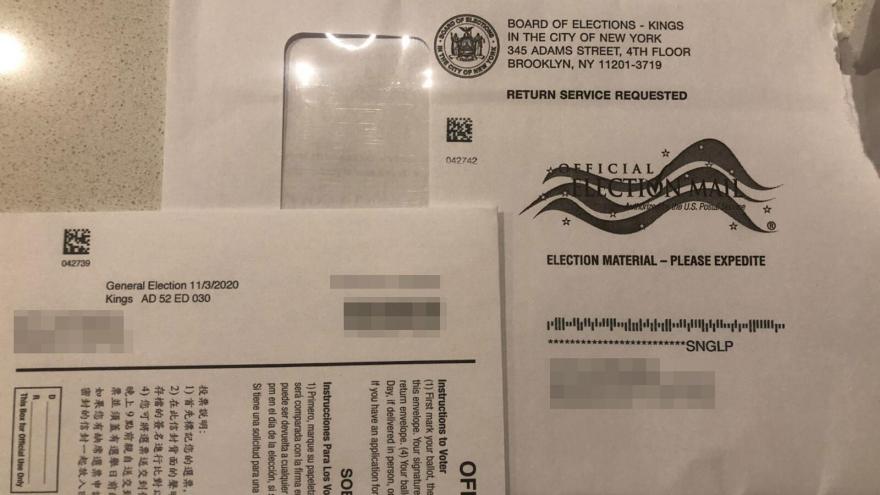 (CNN) -- A misprint by a third-party vendor caused nearly 100,000 Brooklyn voters to receive absentee ballot return envelopes with the wrong address and names printed on them, the New York City Board of Elections said, and voters will be sent new ballots.

In New York, absentee voters must place their completed absentee ballots into a return envelope, known as an "oath" envelope, that includes the voter's name, address and voter ID. The oath envelope is then placed inside a second envelope to be returned to local election officials.

Voters affected by the recent error instead received an oath envelope with the personal information of another voter, raising questions about whether the ballots would be counted in the fall election. The incident comes amid widespread discussion -- and frequent misinformation -- about the security of mail-in voting.

Valerie Vazquez-Diaz, a spokesperson for the board, told CNN the issue affected 99,477 voters. She blamed a third-party vendor, Phoenix Graphics, which had been contracted to print and mail the ballots to voters in Brooklyn and Queens. CNN has reached out to the company for comment.

Michael Ryan, the election board's executive director, said at a meeting on Tuesday afternoon that the city has ordered the vendor to remail new ballots "to make certain that absolutely no disenfranchisement occurs in the borough of Brooklyn."

The remailed ballots will contain an insert explaining why the voter is getting resent the ballot. Ryan said they will also be utilizing traditional and social media to make sure voters are informed of what is going on.

"It is essentially that confidence be established in this process," Ryan said in the meeting.

"The BOE will do everything that it needs to do administratively both in communication with the voters on the upfront on the re-mailing aspect and on the back-end to ensure that all of the ballots received are appropriately processed and the votes that are tallied are properly credited to the voters who have participated in the process," Ryan added.

A total of 520,000 absentee ballots have been sent citywide, according to Vazquez-Diaz, with ballots first being sent out on September 18. As of Tuesday, it was unclear if any ballots affected by the error had been returned.

City election officials were first notified of the misprint Monday afternoon following multiple calls from worried voters. The envelope error also started making the rounds on social media, as city voters were dismayed by the mix-up.

Anders Kapur, 29, who lives in Brooklyn and typically votes Democrat, was shocked when he realized he improperly received the oath envelope of another voter.

"Presumably, someone out there has an envelope with my name on it, and if they don't read the ballot as closely as I did, they could cast a vote in my name," he told CNN.

Kapur told CNN he contacted the city's board of elections as soon as he realized there was a problem. They told him they would send him a new ballot but Kapur worries that the mix-up could lead to potential questions of voter fraud.

Brooklyn resident Barry Petchesky said he is "just gonna suck it up and vote in person, just in case."

Vazquez-Diaz said the board of elections would be releasing a plan Tuesday afternoon to address the issue.

Mayor Bill de Blasio slammed the board of elections for the mistake.

"They have to fix this immediately. This is appalling. It is so easy to avoid this mistake and it is very easy to fix this mistake," de Blasio, a Democrat, said Tuesday.

He asked anyone who received the ballot to call and ask for a new one. De Blasio described the experience as frustrating for voters and said with 35 days until the election, there is still time to receive a correct ballot.

Though misprinted ballots aren't uncommon, this year, due to the expected surge in mail-in voting, the smallest of mistakes could affect hundreds if not thousands of voters.

David Becker, founder of the nonpartisan Center for Election Innovation and Research, told CNN that although "mistakes happen" with mail-in balloting, its prevalence this fall means that such errors could have widespread consequences, not only in the potential to lead to voter confusion but provide more examples for President Donald Trump and critics to sow doubt about mail-in voting.

"We have candidates and foreign adversaries actively seeking to leverage any problem, no matter how small, to reduce voter's confidence in the system, to delegitimize this election. Most election officials across the country are on high alert making sure and double checking that problems don't occur -- and it's actually pretty impressive given how many new options for mail-in voting that there are, that there aren't more problems," Becker said.

Becker noted that problems like the misprint in New York is more likely to lead to voter disenfranchisement issues than voter fraud within the vote-by-mail system. Becker said that there are multiple protections within the voting process that prevent a voter from voting with someone else's ballot.

A similar printing issue affected over 6,100 voters in a northwestern county in Michigan. Newaygo County Clerk Jason Vanderstelt explained in a letter on Monday that absentee ballots sent out left out a key judicial race, prompting new ballots to be printed. Vanderstelt said he was first notified of the issue over the weekend with new ballots set to arrive on Thursday.

"Upon arrival of these new ballots, our clerks will be diligently working to reissue new Absent Voter ballots to all voters who have already been sent a ballot," read Vanderstelt's letter.

Vanderstelt noted in his letter that the county has procedures in place that will ensure only one ballot for each voter will be counted.

Meanwhile, printing errors in Virginia led to 1,400 absentee voters receiving duplicate ballots, according to The Washington Post. Election officials in Fairfax and Henrico counties blamed the error on the high demand of absentee ballots amid health concerns over in-person voting at polling locations. The officials told the Post, though voters received two ballots only one is counted per voter.

"The fact that all of these mistakes are being caught immediately and fixed should give people confidence in the integrity of our system," Becker said.