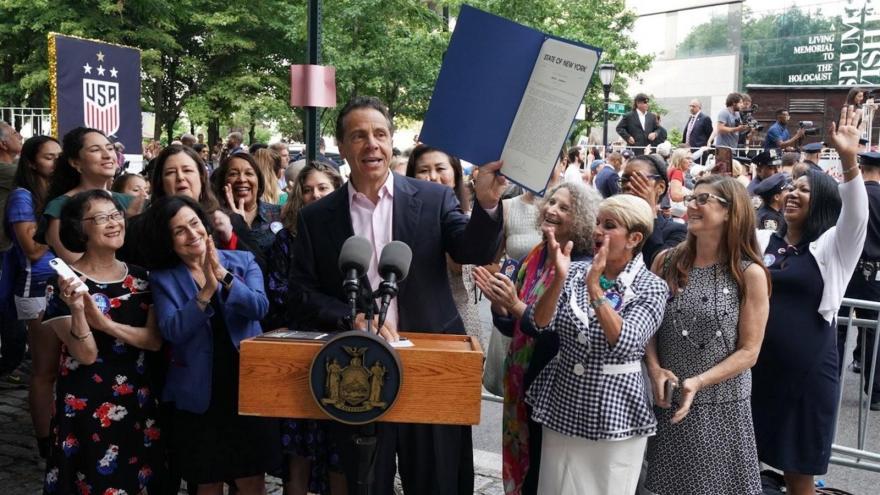 "I just signed new pay equity legislation at the #USWNTParade," Cuomo tweeted, along with a picture from the parade that followed the team's fourth World Cup title. "The women's soccer team plays the same game that the men's soccer players play -- only better. If anything, the men should get paid less. Thank you @USWNT for helping lead this movement for change!"

Cuomo's bill signing comes in the midst of the team's longstanding battle for equal pay. In March, 28 members of the USWNT sued the US Soccer Federation for allegedly discriminating against the women by paying them less than members of the men's national team "for substantially equal work." The soccer federation and the plaintiffs last month tentatively agreed to mediation, which is expected to begin now that the World Cup is over.

New York's bill would expand gender-based wage protections by ensuring that members of legally protected classes, such as women and racial minority groups, receive the same pay as non-protected class employees for equal or "substantially similar work, when viewed as a composite of skill, effort, and responsibility."

Cuomo pointed to the women's team's success compared to the men's team in calling for equal pay.

"Let's be honest. This is all cultural and stereotypical," he added. "It is perpetuating a past injustice (--) women are not going to take it anymore, and they shouldn't."

Cuomo also signed a second bill Wednesday that bars businesses from asking potential employees about their salary history, which could help stifle the gender wage gap. The measure expands beyond state employers and includes companies who do business in New York, casting a wider net among businesses within the state. New York City passed a similar bill in 2017.

Equal pay was a clear theme during the team's New York City celebration. When US Soccer Federation President Carlos Cordeiro spoke during the parade, the crowd erupted into chants of "equal pay."