Nurses are overwhelmed. This Chicago hospital hopes a combat veteran can help them cope with pandemic trauma 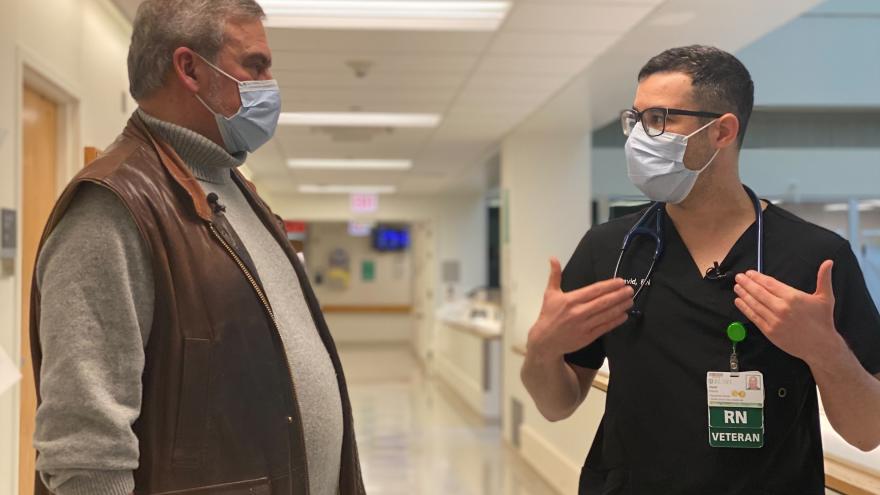 (CNN) -- David Bracho became a nurse after nearly two decades in the US Army Reserve. He's now working in a Covid-19 ward at Rush Medical Center in Chicago -- and he recognizes the parallels.

He was deployed twice, Bracho said, and what he saw in Afghanistan is similar to what he has seen in the Covid-19 unit.

"When the military gets deployed for nine months to a year, we have relief," he said. "There's someone that's gonna relieve us from our duties (so we can) go back home."

But inside Rush and other hospitals across the country, Bracho said there is no relief.

Nurses are working 16-hour shifts -- and picking up more "just to keep the patients safe and alive."

The pandemic has brought the kind of emotional trauma Bracho says will last for years. "There's a huge amount of PTSD ... and these nurses are expected to just work through it," he said.

Nationwide, the numbers tell the same story. Ninety-two percent of more than 6,500 critical care nurses responding to an American Association of Critical Care Nurses survey said the pandemic has depleted nurses. About 66% have considered leaving.

Rush is supplementing care teams with temporary staff for the first time in 20 years, hospital spokesperson Charlie Jolie told CNN. Since the pandemic started, Jolie said more than 3,800 people have been hospitalized with Covid at Rush. He also said Rush nurses have reported leaving for more money or jobs with less stress.

But through a recently launched program, a combat veteran is helping nurses cope with this new burden.

Help from another frontline

Mark Schimmelpfennig is helping nurses by using the same treatment given to soldiers experiencing grief and PTSD. The program, called Growing Forward, is similar to group therapy. Participants attend six sessions for 30 minutes. They also journal, acknowledge what they feel and learn healthy ways to decompress.

"When I was able to say, 'Hey, you're fighting a war against an enemy that you can't see feel touch, hear or taste and it's kicking our butts,' they got it," Schimmelpfennig said. "The cumulative trauma of dealing with that day after day after day after day, through surge after surge -- there's going to be a cost just like when a combat soldier goes outside the wire."

Bereavement Support and Educator Coordinator, Kim Sangster, started the initiative on August 21 after seeing a need to care for staff treating Covid patients.

She says one of the six sessions focuses on self-compassion. Sangster said after every session, participants leave with a linking object or something to remind them of the session.

Another exercise with Schimmelpfennig includes telling the nurses to stomp their feet twice and breathe. Schimmelpfennig said that delay, motion and breath can take people from a 10 on the stress scale to a seven. "Seven is still not very good, but you can get your job done," he said.

Many of the frontline staff Schimmelpfennig has worked with expressed feeling unworthy of the title "hero," he said. Schimmelpfennig described what they were experiencing as moral injury: failing to do something one believes should have been done or an act violating someone's moral code or values. It's an invisible wound thousands of veterans carry.

"Every nurse here is a nurse because they want to help take care of people," Schimmelpfennig said. "And so, when they are in situations where they're not sure if what they're doing is going to work, even though that's the latest and greatest information from the hospital or the CDC, (they question) 'Am I up to this task?'"

There's also anger -- feeling like they are "getting sick and tired of dealing with unvaccinated people" and that "this could have been prevented," Schimmelpfennig added.

A relentless pursuit in an invisible battle

Melissa Gerona is a Rush nurse living with this pandemic trauma. She said she's worked 26 years at the Chicago hospital and cried more in the last two than her entire career.

"We've been through something now, all of us. And now we are doing more with less. Nurses have left the bedside."

Despite the tough days and emotional toll, Gerona vows to never quit. She and other healthcare workers are relentless in their pursuit to save lives while fighting an invisible battle.

"My fear is that we're going to have to do this again. Every time there's a surge and I'm putting on my scrubs in the morning, I am always kind of in disbelief," Gerona said. "I do feel like it's a war. I stay because of my coworkers and my patients."