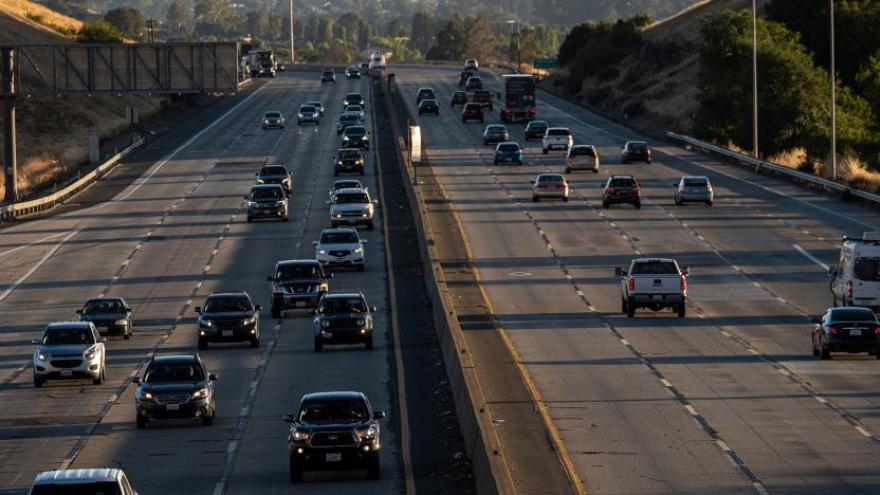 Traffic on Interstate 80 in Crockett, California, on June 9. The National Transportation Safety Board is recommending all new vehicles include drunk driving prevention technology.

(CNN) -- The federal agency responsible for conducting independent accident investigations has recommended technologies in new vehicles to limit speeding and prevent impaired driving in an attempt to cut down on a growing number of related fatal crashes.

The National Transportation Safety Board's recommendation of alcohol impairment detection systems are on a pathway toward requirement, after the Infrastructure Investment and Jobs Act gave the Transportation Department three years to craft a mandate for such a feature in new vehicles. The board's re-recommendation of incentivizing intelligent speed adaptation systems, however, has yet to gain broader federal backing and could face resistance from US drivers accustomed to speed limits being enforced by law enforcement rather than the vehicle itself.

The NTSB's recommendations -- which cannot be implemented without being adopted by the National Highway Traffic Safety Administration -- specifically include requiring all new vehicles have "passive vehicle-integrated alcohol impairment detection systems, advanced driver monitoring systems or a combination of the two that would be capable of preventing or limiting vehicle operation if it detects driver impairment by alcohol."

Reiterating a recommendation made in 2017, the NTSB also suggested the NHTSA incentivize "vehicle manufacturers and consumers to adopt intelligent speed adaptation (ISA) systems that would prevent speed-related crashes."

Intelligent speed adaptation systems can range from a warning system that issues visual or audible alerts when a driver is speeding to a system that electronically limits the speed of a vehicle. The NTSB did not specify which type of system should be adopted.

An investigation into a California crash that killed nine people, including seven children, on New Year's Day in 2021 led to Tuesday's recommendations, according to the NTSB. Investigators, the agency said, "found that the SUV driver (involved in the crash) had a high level of alcohol intoxication and was operating at an excessive speed."

NTSB Chairwoman Jennifer Homendy said on Tuesday that the technologies "can prevent the tens of thousands of fatalities from impaired-driving and speeding-related crashes we see in the U.S. annually."

Thirty-two people die of alcohol-related collisions every day -- more than 11,000 every year, according to the NHTSA. It reported fatalities climbed 5% in 2021.

There are a number of technologies aimed at preventing impaired driving that are being evaluated by the Department of Transportation, according to the advocacy group Mothers Against Drunk Driving. The department was given three years to craft a requirement that new vehicles feature "advanced drunk and impaired driving prevention technology" as part of the infrastructure law, which passed with bipartisan support last year.

The NHTSA said in statement Monday that it "has initiated work to meet the Bipartisan Infrastructure Law's requirement for rulemaking concerning advanced impaired driving technology in vehicles."

The prospective regulation has sparked privacy concerns and questions about whether the systems would falsely classify certain people, like those with disabilities, as being intoxicated.

Intelligent speed adaptation systems have gained some traction in the European market, where they will be mandatory in all new cars being sold there from July 2024. The new cars will issue either a "cascaded acoustic warning," a "cascaded vibrating warning," "haptic feedback through the acceleration pedal" or a "speed control function," according to the European Commission. A driver can override the ISA system, the commission says.

New York City is also piloting a fleet of city vehicles with an ISA system in place. The city announced in August that 50 vehicles operated by city employees will have systems that will set a maximum speed for the vehicle and "will also be adaptable based on the local speed limit." The system has an active modality, which will automatically slow a vehicle down, and passive modality, which will alert a driver when they're speeding.

The vehicles will be retrofitted and installed in vehicles across a variety of city departments, and will also be tested on 14 new, all-electric Ford Mach Es.

This story has been updated with comment from the NHTSA.