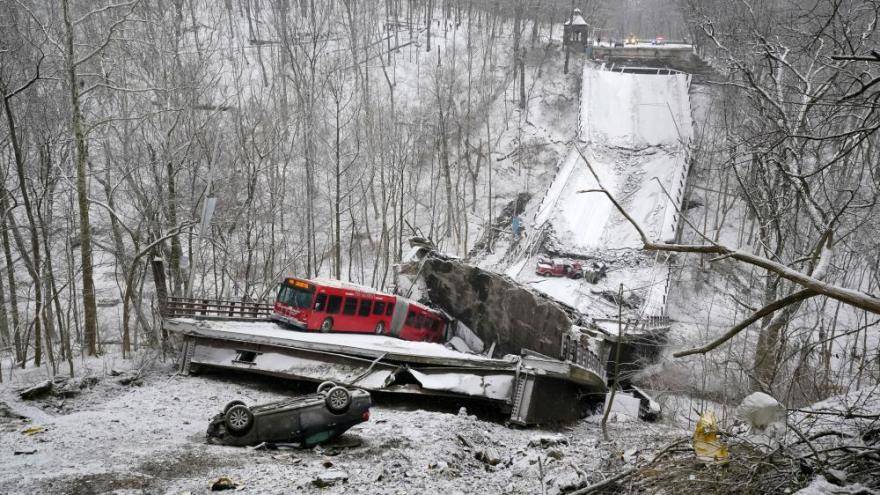 A Pittsburgh Port Authority bus that was on a bridge when it collapsed Friday is visible in the city's East End.

(CNN) -- National Transportation Safety Board investigators descended into a wooded ravine in Pittsburgh Saturday where a snow-covered bridge collapsed one day earlier.

Investigators also flew a drone over the area in search of answers as to why the 52-year-old steel frame bridge collapsed in the predawn darkness Friday, leaving 10 people with what authorities said were non-life-threatening injuries.

The NTSB investigation will examine the full history of the bridge, including design, construction, and maintenance, NTSB chairwoman Jennifer Homendy said.

"Over the coming weeks, we are going to put this bridge under a microscope," Homendy said at a news conference Saturday.

The collapsed occurred hours before a previously scheduled visit to the city by President Joe Biden to discuss infrastructure.

On a scheduled visit to Kansas City Friday, Secretary of Transportation Pete Buttigieg called the collapse "a very blunt reminder" of the need to invest in American roads and bridges.

"The bottom line is this shouldn't happen in the United States of America," Buttigieg said of the collapse, CNN affiliate KMBC reported.

Homendy said structural and material engineers would map out the area with a drone before removing debris and other evidence.

The engineers will look for signs of stress in the materials that made up the bridge as well as fractures and deterioration, according to NTSB investigator-in-charge Dennis Collins.

Four vehicles were on the bridge when it fell in the area of Forbes and Braddock avenues, authorities said.

First responders used ropes to rappel down to get to the victims, Fire Chief Darryl Jones said. Crews also used what he called a "daisy chain" where they linked hands to reach the victims and pull them out.

The Pittsburgh Transit Authority bus shown dangling precariously between two sections of the bridge Saturday had nine cameras mounted on it, Homendy said, but it is not clear whether footage from those cameras will be usable.

The bus could not be moved safely Saturday because there was diesel fuel still on board.

President Biden visited the site of the collapse Friday afternoon.

During a speech at Carnegie Mellon University's Mill 19 Friday afternoon, the President said the collapsed bridge "had been rated in poor condition for the past 10 years."

Pennsylvania Lt. Gov. John Fetterman on CNN Friday called the bridge a "vital artery" in the Pittsburgh area. The bridge crosses Frick Park, one of the city's largest parks.

The bridge had received an "overall condition" rating of "poor," according to the website for the Pennsylvania Department of Transportation, which tracks bridges across the state.

The 447-foot bridge was built in 1970 on a steel rigid frame, according to the website.

Pittsburgh Mayor Ed Gainey said the bridge had last been inspected in September 2021.

Some "rehab" work had been done to the bridge a couple of years ago, including repaving the surface, according to City Councilmember Corey O'Connor.

A preliminary report from the NTSB is expected within the next two weeks, but it will not include a conclusion on the cause of the collapse, Homendy said.