November border arrests up 5% after trending downward in recent months 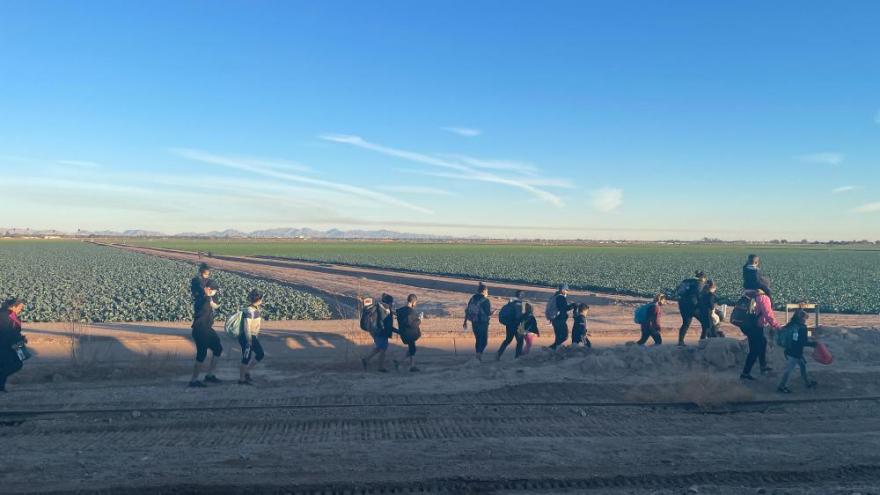 November border arrests are up after trending downward in recent months. Migrants who have just crossed the border are seen here walking into Yuma, Arizona.

(CNN) -- US Customs and Border Protection made 173,620 arrests in November, a 5% jump from the previous month and the first increase since the summer, when apprehensions began to drop, according to newly released data.

Over the course of the year, the Biden administration has wrestled with the unprecedented number of migrants crossing into the US. Early on, the administration faced an influx of children that overwhelmed resources and were later caught off guard by thousands of migrants arriving within days to the unprepared region of Del Rio, Texas.

Since July, when encounters peaked at 213,593, apprehensions along the US-Mexico border began to dip, though they remain high compared with previous years. The Biden administration has relied on a Trump-era public health order to swiftly remove thousands of migrants, which has also contributed to migrants attempting to cross more than once.

Around 25% of those encountered on the US southern border in November had previously tried to cross. Customs and Border Protection also swiftly removed around half of those apprehended in November under the public health order. Single adults continue to make up most arrests.

"CBP's November Monthly Operational Update reflects an incredible amount of work on behalf of the American people to keep dangerous drugs and products out of our communities, to facilitate travel and billions of dollars in trade, and to maintain security along our borders," CBP Commissioner Chris Magnus said in a statement. The Senate confirmed Magnus to the post earlier this month.

The coronavirus pandemic exacerbated deteriorating conditions in Central and South America, prompting people to journey north. Authorities in South America have been monitoring the increased movement of migrants in the region for months. The number of Venezuelans crossing the border, for example, jumped again in November, from 13,421 in October to 20,341 last month.

"On one hand, Covid and the accompanying recessions left many people in the Latin American middle class a lot worse off, and people who would not have considered migrating have decided it's a useful option," said Andrew Selee, president of the Migration Policy Institute. "At the same time, the ease of crossing the border has made some people who have ties to the US decide it's time to come now if they're going to make it. I think both those things are true at the same time."

Biden administration officials have been in discussions with regional partners to try to stem the flow. Last month, then-acting Commissioner Troy Miller led a CBP delegation to Panama, according to the agency, in an effort to "strengthen coordination against irregular migration and transnational organized crime."

The administration also recently relaunched the Trump-era "remain in Mexico" policy, which requires non-Mexican migrants to stay in Mexico until their US immigration court dates.

Biden has previously denounced the policy, but a lower court order required its revival earlier this year. The Department of Homeland Security in October reissued a memo terminating the policy and again outlined the reasons for its termination. On Monday, the 5th US Circuit Court of Appeals ruled against the Biden administration's bid to end the program and rejected the Justice Department's arguments that the October termination memo made the case moot.