Notre Dame cathedral in Paris will reopen in 2024, five years after disastrous fire 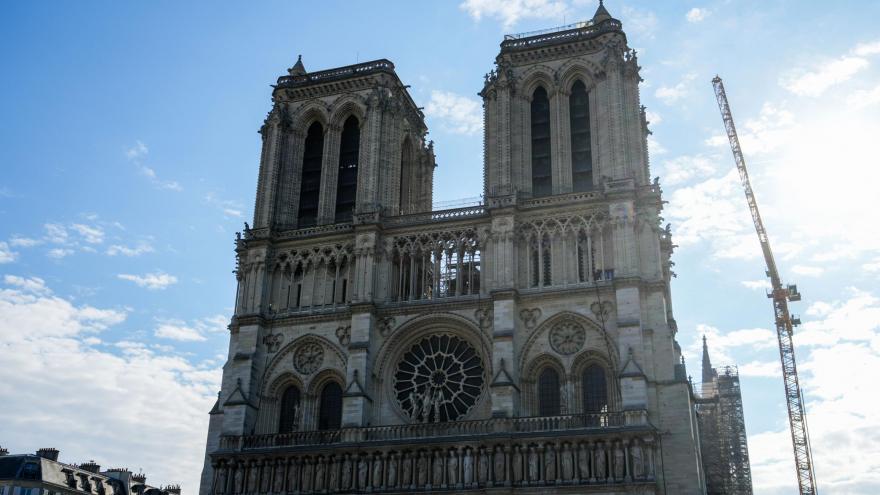 (CNN) -- The Notre Dame cathedral is on track to reopen to the public in 2024 as the cathedral has now been entirely secured, two years after the disastrous fire that destroyed large parts of the 850-year-old building.

In a statement Saturday, the public body responsible for its conservation and restoration said the securing of the cathedral had been completed on schedule.

Elements of the "safety phase," included wrapping and protecting the cathedral's gargoyles, reinforcing the flying buttresses, fortifying the gables and removing burned scaffolding, according to the collective Friends of Notre Dame de Paris.

"That means that we're officially saying that the cathedral is now saved, that it's solid on its pillars, that its walls are solid," General Jean-Louis Georgelin, president of the organization responsible for the restoration told CNN affiliate BFMTV Saturday

"We'll be able to firmly go ahead with the phase of restoring and rebuilding the parts destroyed by the fire, so that it's ready to reopen for services and public visits in 2024," he added.

The 2024 reopening, which Georgelin said would be a "victory for all of France," will fulfill President Emmanuel Macron's promise to the public that reconstruction works would be completed within five years of the April 2019 blaze.

Reconstruction is scheduled to begin in the coming months, according to the organization responsible for overseeing the works.

A definitive cause of the fire has still not been established despite an extensive investigation, although prosecutors said it could have been started by either a cigarette or an electrical fault.

Work on securing the cathedral was temporarily paused during the coronavirus pandemic last year and work was carried out to decontaminate the area of lead before work resumed in June 2020.

After the fire, there was debate over how it should be rebuilt, with former Prime Minister Edouard Philippe suggesting a modern approach, and a competition being launched to redesign the spire -- although others wanted it to remain traditional.

However, last year President Macron decided the entire cathedral would be rebuilt exactly as it was, including the spire -- which was originally made of wood and fell to the flames in the first few hours of the fire.