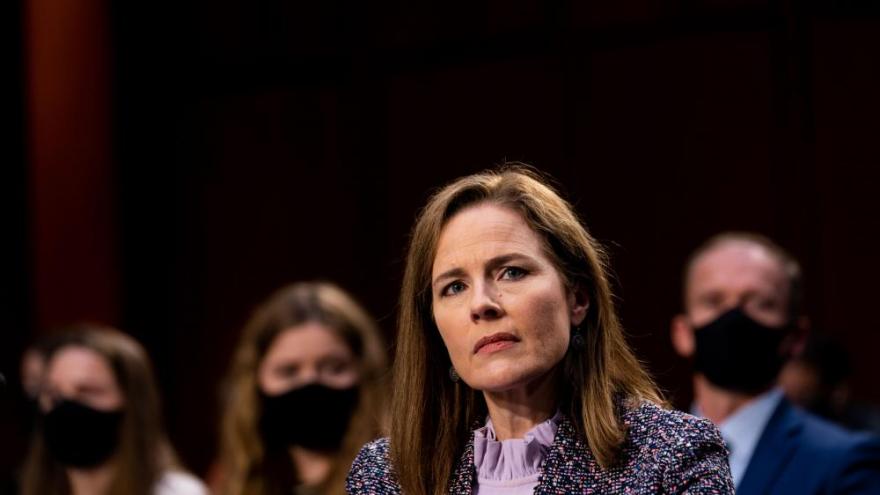 Supreme Court nominee Judge Amy Coney Barrett testifies on the third day of her confirmation hearing before the Senate Judiciary Committee on October 14, 2020 in Washington, DC.

(CNN) -- Public calendars from the University of Notre Dame's law school show at least seven additional talks not listed on Judge Amy Coney Barrett's Senate paperwork, including one with the law school's anti-abortion group, according to a CNN KFile review.

Barrett, whose Supreme Court confirmation hearing to succeed the late Justice Ruth Bader Ginsburg is underway, is listed as participating in the newly discovered talks from 2004 to 2013.

The calendars list her as participating in a panel on religion in the public square, a speech to a student religious society, a talk with the law school's anti-abortion group, a roundtable on the Constitution, a faculty colloquium, a student scholarship symposium and an event sponsored by Notre Dame's Women's Legal Forum.

All of Barrett's events were listed on public calendars from Notre Dame, which CNN's KFile accessed on the Internet Archive's Wayback Machine and on Notre Dame's website. Barrett is required to disclose to the Senate Judiciary Committee all public talks she has given in her professional career, according to a committee staffer. Similar types of events were disclosed on the paperwork she submitted.

Barrett has already faced questions over initially failing to disclose some talks she gave while a law professor at Notre Dame. CNN's KFile reported last week that Barrett initially did not disclose two talks she gave in 2013 hosted by two anti-abortion student groups on paperwork provided to the Senate. Barrett's initial failure to disclose those two events, and subsequent talks found by CNN's KFile, raise questions about whether the questionnaire is a complete overview of her talks as a law professor and whether she could face any consequences from the committee.

CNN's KFile could not independently confirm Barrett's participation in the events, only that they were listed on Notre Dame's public calendars. In several of the instances, only listings for the events, but not descriptions of them, were archived.

Following CNN's reporting last week, and an inquiry to the White House on a 2013 "right to life" ad she signed in a Notre Dame newspaper, Barrett sent a letter detailing the talks and the ad to the Senate Judiciary Committee.

At her hearing on Tuesday, Barrett said those initial omissions had been an oversight due to the large volume of material she had to "find and remember" over 30 years.

White House spokesperson Judd Deere told CNN in an email on Wednesday that Barrett had been "nothing but transparent with the committee," noting that she had provided 1,800 pages of materials, met with "the vast majority" of senators on the committee "and after today will have gone through nearly 20 hours of questioning by members with zero notes in front of her."

A spokesperson for the Senate Judiciary Committee referred CNN to a press release from Senate Majority Leader Mitch McConnell's office that noted that Supreme Court nominees have routinely supplemented their questionnaires.

CNN reached out to Barrett's chambers for comment, but they did not respond.

Of the newly discovered undisclosed talks from Barrett, several of them focused on the intersection between religion and the law, a not uncommon subject for a Catholic university. In April 2004, Barrett was scheduled to give a two-hour talk called "Law and..." The description, according to the calendar, was "Liberally Clothing the Naked Public Square," a reference to religion in the public square.

In February 2005, Barrett was scheduled to speak to the religious student organization the St. Thomas More Society on her experience as a Catholic mother in the legal profession.

In March 2013, the calendar shows she was going to participate in a roundtable with the Notre Dame Program on Constitutional Structure to discuss the year's theme, "The Constitution and Unwritten Law," which was to focus on ways in which the law is shaped by forces outside the Constitution's text.

In four instances, it is not clear what Barrett may have said at the talks nor what the talks were about.

According to a 2005 calendar, she was scheduled to speak to the Women's Legal Forum on April 5, 2005. Likewise, she was scheduled to give a presentation in February 2013 to faculty based on a paper. In January 2007, according to a calendar, she was to speak to the law school's anti-abortion club, Jus Vitae, but it is unclear what the topic of discussion was. And in April 2007, she was set to participate in a student scholarship symposium where she responded to a presentation on an unknown topic from a student from the school's law review.