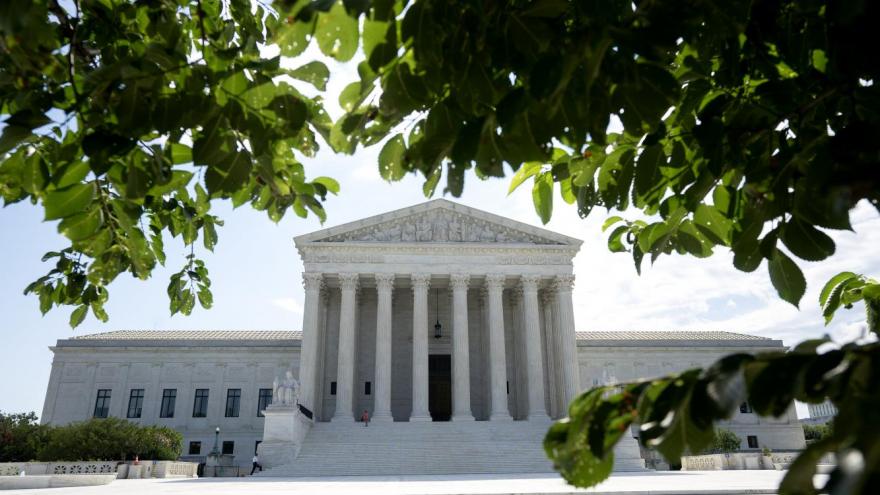 A view of the US Supreme Court building on June 30, 2020 in Washington.

(CNN) -- President Donald Trump has vowed to appoint a woman to replace late Supreme Court Justice Ruth Bader Ginsburg after circulating a roster of more than 20 potential nominees in recent weeks that includes prominent and lesser-known conservatives who would undoubtedly tilt the court further rightward if appointed.

The death of Ginsburg, a liberal icon, on Friday provides Trump with an opportunity to appoint his third justice to the bench, a move that is sure to infuriate Democrats and satisfy Republicans looking to add a sixth conservative justice to the court.

Here are some of the more notable members of Trump's list of potential nominees:

A former clerk to the late Justice Antonin Scalia, Barrett was Trump's pick for a seat on the 7th US Circuit Court of Appeals.

Born in 1972, she served as a professor of law at her alma mater, Notre Dame.

During her confirmation hearing, she had a contentious exchange with Sen. Dianne Feinstein of California, the top Democrat on the Senate Judiciary Committee, who asked her about past writings concerning faith and the law. At one point, Feinstein asked Barrett if the "dogma lives loudly in her." Supporters of Barrett suggested Feinstein was attempting to apply a religious litmus test to the nominee.

Barrett is quoted in a 2013 publication affiliated with Notre Dame as saying she thinks it is "very unlikely at this point" that the Supreme Court is going to overturn Roe v. Wade, the landmark 1973 abortion decision that legalized abortion in the US.

Senate Majority Leader Mitch McConnell has spoken to Trump more than once this weekend and has indicated to him that he and GOP senators know Barrett well, suggesting that her nomination might move quicker because they know her record, according to a source familiar with the matter.

But the suggestion of a Barrett nomination met sharp disapproval from Senate Minority Leader Chuck Schumer who said at a news conference Sunday evening that she "stands for all the things Ruth Bader Ginsburg was against and so many things that the vast majority of American people are against."

Trump appointed Lagoa to the 11th US Circuit Court of Appeals in 2019. Before that, she was the first Hispanic woman and the first Cuban American woman on the Supreme Court of Florida, which is a battleground in the presidential campaign.

If appointed to the high court, she would be its second justice of Latino descent, joining Justice Sonia Sotomayor, who became its first Latino member in 2009.

Lagoa, who has the backing of many evangelicals, hails from Florida and has deep connections in the state that could be a battleground.

Trump on Saturday called her "an extraordinary person" and noted that she is Hispanic.

While Trump met with Barrett in the run up to the Brett Kavanaugh confirmation, it's unclear if he's had a face-to-face meeting with Lagoa.

Another Trump appointee, Rushing has served on the 4th US Circuit Court of Appeals since her Senate confirmation in March 2019.

Born in 1982, a nomination to the high court would position Rushing to serve through multiple administrations for decades to come.

Democrats have criticized Rushing for her short career and her nomination to the 4th US Circuit Court of Appeals brought considerable scrutiny from civil rights organizations in part over her ties to Alliance Defending Freedom, where she held an internship and later spoke to law students at ADF-sponsored events.

"Her record clearly shows she will not be a fair and independent judge -- a reality with dire consequences for Fourth Circuit cases and the American people," Vanita Gupta, president and CEO of The Leadership Conference on Civil and Human Rights, said in a statement at the time.

Other names signal what Trump is looking for

While the President has said he'll nominate a woman, the men he has previously floated for nominations still offer a look at the kind of conservative credentials he's looking to place on the Supreme Court.

Amul Thapar, who was previously considered to be a frontrunner should a vacancy arise, was handpicked by McConnell to serve as the US attorney for the Eastern District of Kentucky. Trump nominated Thapar to the 6th US Circuit Court of Appeals in 2017.

In 2007, Thapar was the first American of South Asian descent to be named to an Article III federal judgeship.

Francisco, who stepped down as solicitor general in July at the end of the Supreme Court's last term, had served as many controversial issues came to the court, including disputes regarding the President's financial records, the travel ban, the Deferred Action for Childhood Arrivals program, religious liberty and the effort to add a citizenship question to the census.

Clement served as solicitor general during George W. Bush's presidency. One of the most experienced appellate advocates in the country, he has argued more than 100 cases before the court.

Trump had added several new names to his list earlier this month, including three Republican senators -- though two of them swiftly said they weren't interested in a spot on the bench. The third, Sen. Tom Cotton of Arkansas, initially responded by saying he "will always heed the call of service to our nation."

He also said at the time that "It's time for Roe v. Wade to go."

Cotton, however, said Sunday that he was no longer on Trump's list for the spot and that he's "communicated with the White House that now is not the time to have me under consideration."