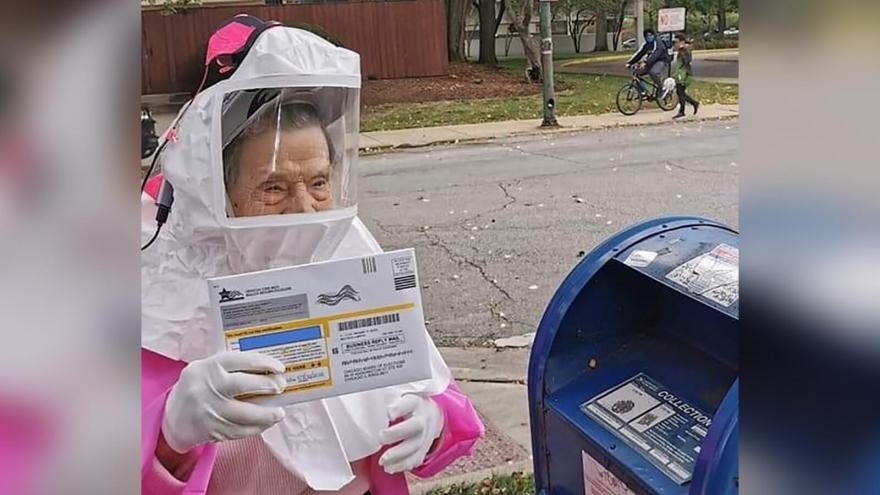 Bea Lumpkin, 102, cast her vote in the 2020 election by mail, decked out in personal protective equipment. She told CNN this election is one of the most critical of her lifetime.

(CNN) -- Bea Lumpkin is 102 years old and has never missed an election as long as she's been eligible to vote.

Not even a global pandemic could stop her from voting in this one.

Lumpkin, a former Chicago public school teacher, dressed in personal protective equipment from head to toe to drop off her ballot for the 2020 presidential election at the mailbox last week. The Chicago Teachers Union, of which she was a member, shared the image.

At her age, Bea's at high risk for becoming severely ill if she contracted coronavirus. But she would never have missed her chance to vote. She urges every registered voter in the US to exercise their right, too.

"The most important reason to vote in this election is that there's so much at stake, more than any other vote I've cast, because of the great challenge to the survival of our democracy," Lumpkin told CNN.

If she could vote this year, so can anyone who's registered, she said. And the retired educator knows better than most the value of voting. Here's why Bea Lumpkin, proud voter and centenarian, says it's so critical to vote in 2020.

There's a lot on the line

Many of the issues Bea cares about are especially relevant in 2020: health care, racism and climate change among them. She believes in health care for every American; she wants to see reforms in law enforcement to end brutality and racism in policing; and she warns of the destruction wrought by climate change, such as the wildfires that burned down her son's California home.

She's also very over living through the pandemic, and she disagrees with the ways in which science has been undermined by the President and other federal officials charged with leading the pandemic response. She once taught biology, she said, and she's a "great respecter" of the advances scientists have made since her birth.

"I'm sick and tired of this pandemic, and we'll never get rid of it unless we follow the experience of so many other countries, of the advice of science," she said.

She misses her daily trips to her local YMCA, where she'd work out everyday before the pandemic. She misses hugging her grandkids and seeing her friends and getting out of the house every once and awhile.

Her hairdo has also suffered as a result of the pandemic, she says.

2020 is also, she points out, the 100th anniversary of the 19th Amendment, which granted women (mostly White women, at the time) the right to vote. A lifelong feminist, Bea encourages women to vote not only to mark that anniversary but to protect their rights.

"Women still have so many additional reasons to vote because in this election, all rights that women have won in the hundred-odd years I've been on earth -- they're all on the line," she said. "But then, this fight for our rights is much older than we are -- it's even older than I am."

Voting by mail was simple, she says

In a typical election year, Bea would vote early, usually at the YMCA where she worked out daily pre-pandemic. But this year, it was safest for her to vote by mail, she said.

Her ballot was received within 48 hours of submission, a process she tracked online, she said. It was a quick and simple way to vote, and she's wearing a big "I Voted" button this week to celebrate.

She knows many voters are anxious about mail-in voting due to the misinformation that surrounds it, so she encourages voting early to avoid crowds on Election Day. She's seen lines for early voting in Chicago stretch around an entire city block -- and she's "very proud of everyone coming out," she says.

2020 might be the most important election of her lifetime

Lumpkin has lived -- and voted -- through some of the most pivotal periods in American history: the Great Depression and World War II, the civil rights movement and the end of segregation, the Vietnam War, the Cold War, threats of terrorism and financial crises to the present, with questions now on how the US will emerge from the pandemic.

It's essential to vote this year to determine what that future will look like, she says.

Lumpkin, a staunch supporter of labor unions, makes a point about wealth inequality in the US as one reason to vote -- "You're not getting the value of the work you do. So unless you own everything, it's to your interest to have more equality."

And in spite of all the pain of this year, she's hopeful for the future.

"There's a possibility of correcting so many of the wrongs if we have an overwhelming vote for our democratic rights," she said. "We don't want to just restore what we had before. And people who aren't interested in voting usually think it's not going to make a difference. And this time it can make such a big difference, not only in preventing the loss of the freedoms that we do have ... but we can gain so much. There's so much good in people that could come out if it had the chance."

As for the result of the 2020 election, she's both "scared to death" and "excited about the possibility of creating a much better country."

"I want to see everybody who's coming out to vote to stay involved in the process -- that's the way we can make huge advances for working people," she said.

She's especially proud of American youth, whom she believes will fight for a fair future.

"I have great confidence in young people, and I know they're going to do what needs to be done," she said. "So hooray for the youth!"

She's got decades on this election's first-time voters, but at 102, Bea's done her fair share for democracy, too.