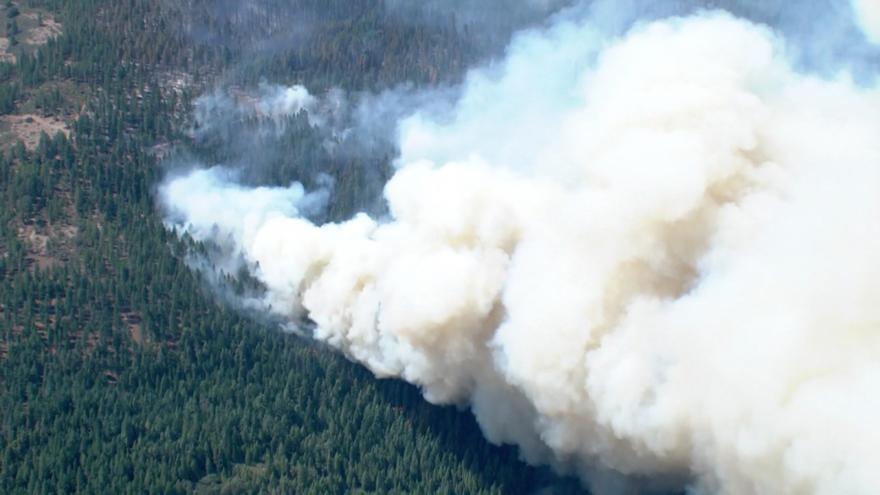 (CNN) -- Thousands of people have been evacuated as a wildfire ignited over the weekend in Northern California tripled in size within a day and almost leveled a small town, officials said.

"The fire continues to pose a high risk to multiple populated communities," Cal Fire said in a Tuesday update.

Gov. Gavin Newsom on Tuesday declared a state of emergency for El Dorado County due to the fire, which has devastated the community of Grizzly Flats, located about 65 miles east of Sacramento.

Many structures have been destroyed and many others are threatened, officials said. The fire burned at least one elementary school in the Pioneer Union School District, one community church, and one post office, Cal Fire officials said.

Two people were airlifted to hospitals after getting seriously injured in the area, Cal Fire said. One person approached firefighters, who tried conducting first aid before the person was taken to a hospital. Another person suffered "severe" injuries.

Overall, about 6,850 people are evacuated, according to the office of emergency services.

104 large fires are burning in US

Nationally, there are 104 large fires burning, mostly in the West, where drought conditions and red flag warnings continue to fuel the raging wildfires, according to the National Interagency Fire Center.

"As a result of the elevated to critical fire weather conditions, almost every ongoing large fire was active across North Ops, Northwest, and Northern Rockies with many of the fires exhibiting rapid and significant growth. New large fires emerged in north-central/eastern Montana and eastern Washington as well," the NIFC said.

Track the wildfires across the West

Another fast-moving fire that is alarming officials is the Ford Corkscrew Fire burning northwest of Spokane, Washington. The fire has scorched 13,000 acres, up from 4,500 acres at 5:30 a.m. local time Monday. It started around 1:45 p.m. local time on Sunday, according to the fire district's updates posted on their Facebook page.

"For most of the summer, our fires have been dry-fuel driven and topography induced spreads. Now that the fuels are so dry, our main concerns for the rest of the summer and fall are the windier conditions that come with those seasonal changes," the post said.

In Utah, the Parleys Canyon Fire was 40% contained, officials said Tuesday in a tweet, prompting the lifting of evacuations orders for thousands of homes near the blaze. The fire scorched 541 acres, officials said.

"Thanks to rain on the #ParleysCanyonFire, all residents will be allowed to return home after 8 PM!" fire officials said.

On Saturday, more than 6,000 homes in the communities of Summit Park, Pine Brook, Lambs Canyon and Mill Creek were evacuated.

Meanwhile, the Dixie Fire, the nation's largest, has grown in size while containment remains stagnant. The second-largest wildfire in California history has ripped through 626,751 acres with only 31% containment. In addition, windy, red flag conditions are expected for the next several days, according to Cal Fire.

"Spotting, single and group tree torching all contributed to fire growth. Challenges to the control lines occurred in many divisions, as fuel conditions allowed for steady growth." Cal Fire said. "Wind gusts have reached 30 mph and relative humidity is still expected to drop with the approaching cold front."

The fire is burning across California's Plumas, Butte, Tehama, and Lassen counties and has destroyed 1,208 structures, including 645 single residences, Cal Fire said. More than 16,085 structures are still threatened by the blaze.

Three first responders have been injured fighting the fire, according to officials.