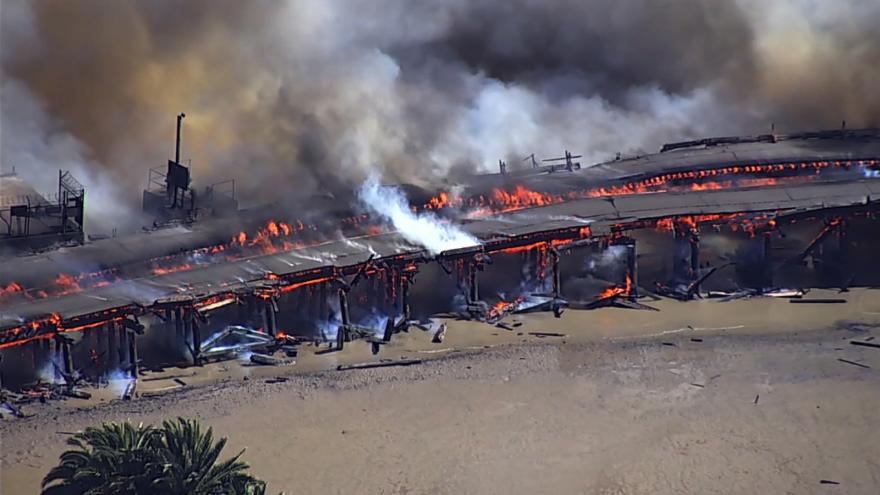 (CNN) -- A four-alarm fire that ignited Saturday near a port in Benicia, about 40 miles northeast of San Francisco, has been extinguished, according to city officials.

"The Benicia Port Fire that began Saturday, was declared contained at 9:40 a.m. on Sunday, April 10, and was declared extinguished at 12:24 p.m," the City of Benicia said in a statement.

The Benicia Fire Department was first dispatched to a blaze near the Amports port terminal around noon Saturday. Firefighters discovered an active fire at the base of a petroleum coke silo with flames burning a conveyer belt near a docked tanker ship, according to the statement.

"Ultimately, the fire progressed to a fourth alarm, the maximum in the Solano County alarm matrix," Fire Chief Josh Chadwick said in the statement.

According to Chadwick, the primary concern was community safety.

"The biggest potential threat to the community was air quality," Chadwick said. "The smoke emitting from the fire contained particulate matter and the potential of toxicity from chemicals. We were fortunate in having continuous wind blowing from the west, allowing the smoke to blow towards the water and dissipate before impacting other populated areas."

Solano County Environmental Health staff monitored air-quality at the scene Saturday and did not register any harmful readings. the statement said.

Fire officials said Saturday they did not have to issue shelter-in-place orders but did ask residents to avoid the area of Bayshore Road near the Amports docks.

The Solano County Fire Investigation Unit is working to determine the cause and origin of the fire.

Chadwick earlier said an assessment on the extent of damages would likely occur on Monday.