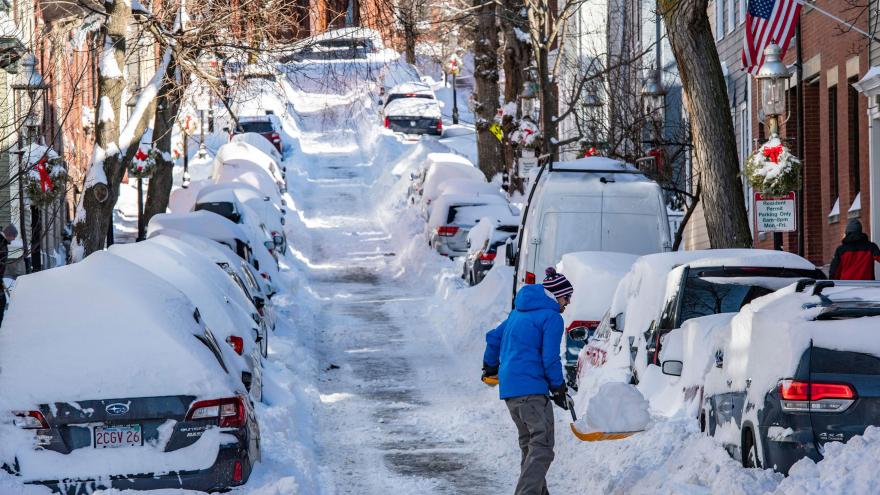 (CNN) -- The Northeast continues to face dangerous cold Monday as it digs out of record snow from a bomb cyclone storm that sapped power to more 100,000 customers in Massachusetts alone and canceled some 5,000 US flights.

Highs across New England and parts of the Mid-Atlantic are expected to remain below freezing Monday as electricity gets restored to the fewer than 2,500Massachusetts, New York and Pennsylvania customers still in the dark, according to PowerOutage.us.

Freezing temperatures Monday morning also are impacting parts of Florida, where over 4 million are under frost or freeze alerts.

The nor'easter's intensity -- driven by a fast and steep drop in pressure -- meant parts of some Northeastern states saw snowfall records shattered Saturday, according to the National Weather Service.

Boston recorded its biggest snowfall ever on any single day when 23.6 inches fell Saturday, the weather service office in the city said.

Atlantic City, New Jersey, recorded 14 inches of snow, breaking the record for that date of 7.3 inches set in 2014. The city's monthly total is now 33.2 inches, far surpassing the previous monthly mark of 20.3 inches set in January 1987.

Philadelphia recorded 5.8 inches of snow, the most ever recorded on January 29; the prior record was 5 inches, set in 1904. The same storm in 1904 set the January 29 snowfall record for New York's Central Park -- which also was broken Saturday: The park recorded 7.3 inches of snow, eclipsing the record by more than 2 inches.

John F. Kennedy International and LaGuardia airports also set snowfall records Saturday as air travel was heavily impacted by the storm. More than 1,500 flights in the US were canceled Sunday due to the nor'easter after more than 3,500 flights were halted Saturday, according to aviation tracker Flightaware.com.

New storm this week for eastern US

As the Northeast and Mid-Atlantic recover, over 30 million people are under winter storm watches from Colorado to Michigan, including in Colorado Springs, Kansas City, St. Louis, Chicago, Indianapolis and Detroit.

More precipitation is on the way as a new storm is expected to break out tomorrow evening across the Rockies and spread east on Wednesday and Thursday, stretching from Texas to the Great Lakes.

At the northern end of the storm, parts of Missouri, Illinois, Indiana and Ohio may see widespread heavy snowfall, with accumulations of more than 1 foot, according to forecasts.

Widespread power outages may be in store as a half inch to three quarters of an inch of ice may accumulate -- with isolated areas seeing over an inch of ice -- from the southern Plains to the Ohio River Valley.

Meantime, strong thunderstorms and heavy rains could strike the South. Widespread rainfall totals of 2 to 4 inches are possible for much of the region, with isolated totals possibly reaching 6 inches in parts of Texas.